Extract: “From Muddy Waters to The Rolling Stones: Blues and Cultural Appropriation” 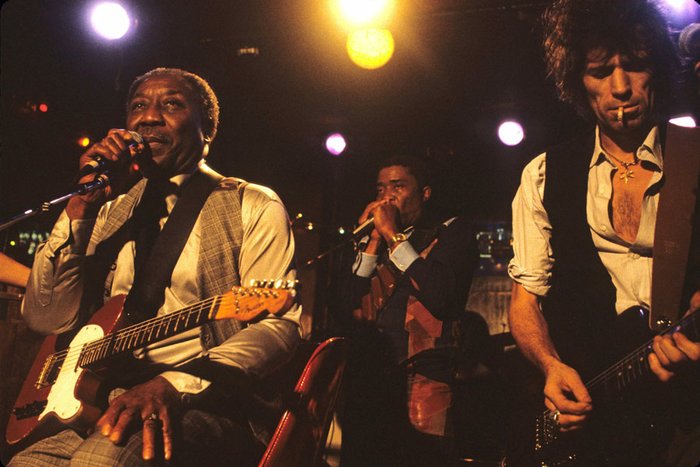 It was 5 August 1976 and Eric Clapton was drunk, angry and on stage at the Birmingham Odeon. ‘Enoch was right,’ he told the audience, ‘I think we should send them all back.’ Britain was, he complained, in danger of becoming ‘a black colony’ and a vote for controversial Tory politician Enoch Powell whom he described as a prophet was needed to ‘keep Britain white’. Although the irony was possibly lost on Clapton, the Odeon in Birmingham is on New Street, minutes from the Midland Hotel where eight years earlier Powell had made his infamous ‘Rivers of Blood’ speech. But if the coincidence was curious, the hypocrisy was breathtaking: Clapton’s career was based on appropriating black music, and he had recently had a hit with Bob Marley’s ‘I Shot the Sheriff’.

FROM ‘I CAN’T BE SATISFIED’ TO ‘SATISFACTION’: MUDDY WATERS AND THE ROLLING STONES.

The smile of an R&B artist circa 1949 was the smile of someone expecting to be beaten up at any moment – Philip Norman.

According to Sandra Tooze’s biography, Muddy Waters was born McKinley Morganfield on April 4th, 1913 in Issaquena County, Mississippi. At the age of three his mother moved the McKinley family to Stovall’s plantation in Clarksdale, Mississippi, where Waters lived until he was 28.

Waters began his musical career on the harmonica, and at age seventeen he was playing guitar at parties and juke joints in Clarksdale, imitating the styles of two highly influential senior bluesmen, Son House and Robert Johnson.

The outset of his recording career began when he was approached by socio-musicologist Alan Lomax, with subsequent recording sessions taking place on two occasions at Stovall’s, in 1940 and 1941. In 1943 he joined the migration to Chicago, where he became a professional musician. In 1946 he cut his first recordings for a small independent record label, Aristocrat, run by brothers Phil and Leonard Chess, and in the year following, backed only by bassist Big Crawford, he recorded ‘I Can’t Be Satisfied’ and ‘Feel Like Going Home’, two country blues songs written during his years at Stovall’s. Leonard Chess pressed 3000 copies on 78rpm shellac discs, almost all of which sold out in record stores in Chicago within 24 hours of their release.

In 1950, Aristocrat changed its name to Chess Records, and Waters’ first release for the new label, ‘Rollin’ Stone’, an up-date of a 1941 Robert Petway hit, ‘Catfish Blues’, sold 80,000 copies in Chicago, Detroit, St Louis and Memphis. The song was inspirational in many ways for both emerging and established rock acts in the 1960s: a group of five young blues aficionados from Kent in England adapted its title to form the name of their R&B and blues-based rock band – the Rolling Stones – 12 years after the song’s release; Bob Dylan, newly reinvented as an electric blues rocker following his infamous Newport Folk Festival appearance in 1965, wrote and recorded ‘Like a Rolling Stone’; and in 1967 Jimi Hendrix recorded his own take on the original ‘Catfish Blues’. According to the album notes for the posthumous Jimi Hendrix CD Blues, released by Polydor in 1994,

Waters developed, over the next five years, his highly influential trademark sound: ‘The big drop afterbeat on the drum formed the foundation of my blues…nothing fancy, just a straight, heavy beat with it…I took the old time music and brought it up to date’.

In 1954 he recorded ‘Hoochie Coochie Man’ with a band that comprised Jimmy Rogers (second guitar), Amos ‘Junior’ Wells (harmonica), Otis Spann (piano), bassist, song-writer and arranger Willie Dixon, and drummer Fred Below. A winning formula had been struck, and Waters went on to define, almost single-handedly, the distinctive electric Chicago blues of the post-war period, with Howlin’ Wolf his only serious rival.

In 1958 he visited England and shocked audiences with the sonic force of his performance. Although becoming a key influence on the following generation of blues-based rock bands in Britain during the 1960s, his album sales for Chess entered a steady decline. In 1977 he was signed to Blue Sky records on the recommendation of white Texan blues-rocker Johnny Winter, and enjoyed a brief artistic and commercial renaissance, his reputation as one of the key musical innovators of the 20th century restored by the devotion of his new-found, predominantly white audience. He died on 30th April 1983.

In his book Blues – The British Connection  Bob Brunning – one-time bass player with Peter Green’s Fleetwood Mac – outlines the circumstances in 1962 under which the members of the Rolling Stones were drawn together through their mutual fascination with blues. The earliest incarnation of the group comprised Mike Jagger (as he was then known), Dick Taylor (later of the Pretty Things), Keith Richards and Brian Jones. All were students at Sidcup Art College, except Jagger, who was then studying at the London School of Economics.

With one exception, the five members of the Rolling Stones were born into the sleepy suburban torpor of post-war Britain’s Home Counties. Michael ‘Mick’ Jagger was born in Dartford, Kent on July 26th 1943; Keith Richards was also born in Dartford, on December 18th 1943; William George Perks (Bill Wyman) was born in Lewisham, South London, on 24th October, 1936; Charles Robert ‘Charlie’ Watts was born in University Hospital, London, on 2nd June, 1941, and was raised in the London borough of Islington; Lewis Brian Hopkin Jones was born in Cheltenham, Gloucestershire on 28th February, 1942, and moved to London in 1961, meeting and joining the other members of the Rolling Stones in 1962.

Yet, as Ian McDonald notes in his book The People’s Music, the Stones were to end up operating to an entirely different agenda:

Without the greyly restrained and deferential culture of the fifties…the Stones would have had no context for their outrageous story to be played out against…They needed the stuffiness, pomposity, snobbery and social inertia as the theatre in which they acted out their drama.

Under the tutelage of their manager, Andrew Loog Oldham, who wrested control of the group from Giorgio Gomelsky, they became, between 1965 and 1969, the anti-Beatles. While the Beatles’ early clean-cut image earned them trans-generational appeal, the Stones were strictly for the rebellious at heart, the antithesis of bourgeois English respectability. Their run of self-penned hit singles between 1965-69 included the Muddy Waters-inspired ‘(I Can’t Get No) Satisfaction’, ‘Nineteenth Nervous Breakdown’, ‘Have You Seen Your Mother, Baby, Standing in the Shadows’, ‘Paint It, Black’ (whose title’s initial comma was later removed, and then reinstated), ‘Let’s Spend The Night Together’, ‘Jumpin’ Jack Flash’ and ‘Honky Tonk Women’. These songs’ subject matter included the inanity of American radio advertising, psychiatric disorders, teenage pregnancy, existential nihilism, one-night stands, recovering from the use of LSD, and bar-room ‘dancing girls’.

In 1967 the British establishment hit back at the Stones. There were drug arrests, suspended jail sentences, editorial leaders in the Times – the rock ‘n’ roll circus had come to town and was packing in eager audiences.

In 1968, following a brief experimentation with LSD and psychedelia on Their Satanic Majesties’ Request,  they made a return to blues and R&B for Beggar’s Banquet, covering ‘Prodigal Son’ by Reverend Robert Wilkins.  By the mid-70s they were largely a spent creative force, and by the turn of the millennium they had become a stand-alone multi-million dollar global entertainment industry, recycling their past in concert as a travelling greatest hits machine, releasing desultory albums that no-one beyond their keenest fans wanted to hear, yet becoming revered as the sexagenarian surviving heroes of the erstwhile counter-cultural ‘revolution’, and a much-loved British institution.

It all seems a far cry from ‘Honey Bee’ by Muddy Waters.

He was soon to come across the work of an outstanding musician who was to inspire him for the rest of his life – Robert Johnson, the legendary Delta singer/guitarist whose tragically short lifespan was nevertheless long enough to enable Johnson to produce some crudely recorded but quite astonishing and perennially influential performances.’

Clapton would join the Yardbirds in 1963, whom he would then leave for John Mayall’s Bluesbreakers in 1964, and in 1966 form Cream with Jack Bruce and Ginger Baker. Each of these musicians shared a love of African American folk music – blues.

Unlike the Beatles, whose eclectic influences comprised other forms of black American music than blues, including liberal doses of 1950s rhythm and blues (especially Chuck Berry and Little Richard), rockabilly (especially Elvis, Carl Perkins and The Everley Brothers)…and the songs and performing style associated with Motown, virtually all of the most influential British London ‘beat’ groups of the 1960s took electric blues as their initial inspiration. In general principle those who were able to write original material that built upon the standard 12-bar format of classic rural and urban blues, by incorporating this with the harmonic structures of the European classical tradition, following the example of the Beatles, went on to form the pop bands that created the most enduring popular music of the 1960s. Of these, arguably the most notable were the Rolling Stones, the Kinks and the Who, all of whom were able to write songs whose originality and longevity could be compared to those of the Beatles. Those British groups who could not quite match such innovative power, and whose longevity suffered as a result – the Animals, the Small Faces, the Pretty Things and Manfred Mann – either repeatedly revised their format or floundered as the 60s drew to a close.

Perhaps the most celebrated example of this compositional process is ‘Yesterday’ – an acoustic guitar ballad accompanied by a string quartet. Other songs demonstrating such harmonic sophistication, and eclecticism in execution, included ‘Ruby Tuesday’ and ‘As Time Goes By’ (the Rolling Stones), ‘Dead End Street’, ‘Waterloo Sunset’ and ‘Days’ (the Kinks), and ‘A Whiter Shade of Pale’ (Procol Harum), plus material written by the Gibb brothers song-writing partnership, and performed as the Bee Gees: ‘I Can’t See Nobody’ and ‘To Love Somebody’ in particular. Few of the other groups mentioned wrote songs that would cross over so successfully into other demographics – material that could be ‘covered’ by artists working in diverse areas in the manner of the Tin Pan Alley pop ‘standards’: ‘Yesterday’ is reputedly the most-covered song in pop music, having been recorded by over 3,000 artists, including Daffy Duck and Placido Domingo (though not together). Of those mentioned above, ‘A Whiter Shade of Pale’ is the second most successful in this regard, having been recorded by over 1000 artists.

In The Beatles, Popular Music and Society, Jon Fitzgerald outlines three of these groups’ scale usage:

The songs by Lennon-McCartney, Jagger-Richards and (Ray)Davies employ a very similar profile of scale usage. These writers clearly favour complete major scales over major pentatonic and hexatonics, and they use blues inflections and/or mixolydian scales in approximately one in three songs. Jagger-Richards are more inclined towards melodies which incorporate the flattened seventh but not the flattened third. On the other hand Davies favours both the flattened seventh and third scale degrees; more than half his songs involve either mixolydian, minor pentatonic or blues scales, and only one in three features complete major scales.

An extract from an MA thesis on social anthropology, a look at blues, white rock bands and cultural appropriation by Keith Rodway.

6 Responses to Extract: “From Muddy Waters to The Rolling Stones: Blues and Cultural Appropriation”