Fake News and the Orange Fuhrer 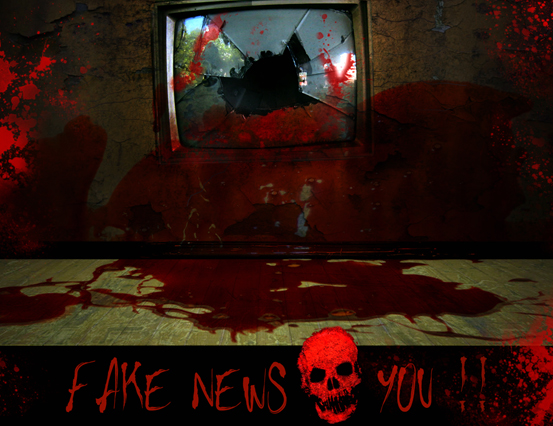 Edgar M. Welch showed up heavily armed
At the Comet Ping Pong pizzeria.
He was ready to liberate some phantom children
Whom he believed were being held there –

Held in the restaurant as sex slaves for Hillary Clinton,
Then the candidate for US President.
After his arrest Welch told the papers,
“The intel on this wasn’t 100 percent.”

Someone quite similar has just been elected
To the office of the United States President –
Someone armed, thin-skinned and unpredictable;
Peddling fables that are unsubstantiated.

Trump is a serial swindler and predatory sex pest;
He’s a pathological liar who’s convinced
That the outside world is unable to survive
Without endless self-opinionated tweets.

His very appearance suggests something fraudulent:
He combs his long hair at the back of his head to the front
Then crowns his orange face with a yellow pancake,
Made from lacquering his hair into a matted lump.

He’s in hock to unsavory Russian oligarchs.
He abuses the Presidency to pay his debts.
His White House promotes his daughter’s tacky jewelry.
He regards America as his marionette.

He’s a big fan of waterboarding as a torture
(“What do I care if the bad guys get snuffed?”).
But hopefully the world may one day decide
That Trump has tortured it for long enough.

While he talks gibberish and twists man’s moral compass
A sickened outrage is all it’s possible to feel.
Some understandably pin their hopes on an assassin’s bullet
For the fake news of the fake President is so unreal.

This bipolar president in a multipolar world
Is now speaking of a nuclear High Noon.
Must we really go to hell in Trump’s hand-cart
To the sound of a mad tycoon’s loony tunes?

The mad President latches onto unproven news
To make himself look decisive.
He won’t admit Syrians to the US, but he’ll bomb them
Thus making himself the foulest object of derision.

After feigning emotion about “beautiful babies murdered”
Trump launches fifty nine missiles in a “measured attack”.
He murders nine civilians and four children
In the countryside of al-Sha’aryat.

In the War Room of Trump’s Florida White House,
Seated in Trump’s signature golden chairs,
The baby-killers gather round their leader
And his son-in-law – his top advisor.

Without consulting the UN or his Congress
Trump sends off his war planes.
The horsemen of the apocalypse speed off
Unrestrained by any legal reins.

Trump spares no time to study the real news,
Namely that the US Pentagon
Trained those in opposition to Assad
In the use of the chemical Sarin.1

But Trump wishes to target Assad
As he thinks it’ll make him popular;
As will his challenging Assad’s ally, Russia,
The US’s old Cold War enemy.

It was a way too for Trump to rid himself
Of the ‘Russiagate’ allegation,
Namely that he’d colluded with Russian hackers
To win the American election.

In a follow-up to his strikes Trump kills a woman
Together with her six children
But he’s making America great again
With any fake news he can get his hands on.

The idea that Trump can affect mankind’s future
Has to fill the whole world with sorrow.
He’s been called a child, a moron and someone
Who shouldn’t be in charge of a wheelbarrow.

Signing executive orders without reading them,
This maniac President is unpredictable.
He’s killing people to boost his poll ratings
Or to distract the media from a scandal.