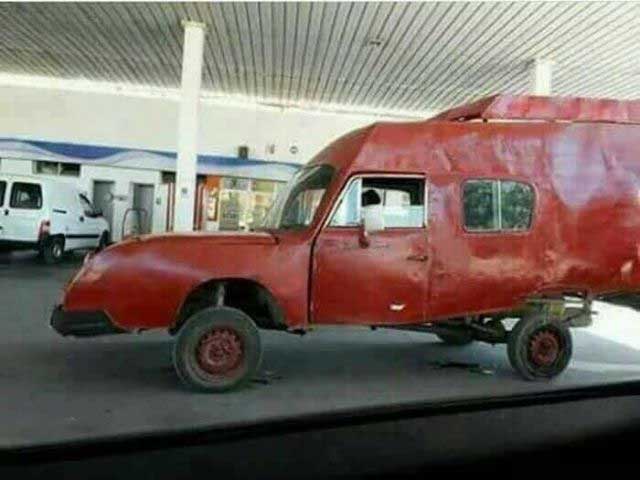 The future of British car making is secure despite fears it would implode after Brexit.

Delighted bosses today unveiled the first British-made model to roll off the production line since the country voted to leave the EU.

And experts say the gleaming red family car – pictured above – is evidence brilliant British craftmanship is here to stay.

It has all the hi-tech gadgets that drivers have come to expect from so-called industry leaders in Germany and Japan.

Top of the spec list is air conditioning, which is activated simply by rolling down the window (electric windows not currently available).

It also has the latest engine stop-start technology to rival anything Audi or Honda can produce.

When the Fiesta Farage pulls up at a junction, the engine stops – not for any fuel-saving reason, but because it has broken down.

And it handles superbly, taking corners like they are not there (it simply ignores them and goes straight on).

Motoring journalists were in awe when the Fiesta Farage was launched at the East Anglian Motor Show yesterday.

And they believe the car – already given the sporty FF nickname – will be a new fixture in Waitrose car parks, where nine out of ten cars are Audis.

Lorraine Fisher, 34, who writes a motoring column for The Spectator magazine, said: “Doom mongers who voted to remain in the EU tried to claim Britain going it alone would badly hit key industries like car manufacturing.

“They said standards would fall and it would be like returning to the bad old days of British Leyland.

“But they will be choking on their words once they get behind the wheel of one of these beauties.

“Not only does the car look gorgeous with a beautiful finish, it handles like a dream and should also come with cheap car insurance.”

The Fiesta Farage, the first British-made car since the Trabant was reintroduced to Norfolk, starts at just £29,000 for the base model.

But if you want an engine and four wheels, you will have to stump up an extra £8,000.