FRIENDS TO THE FLAME 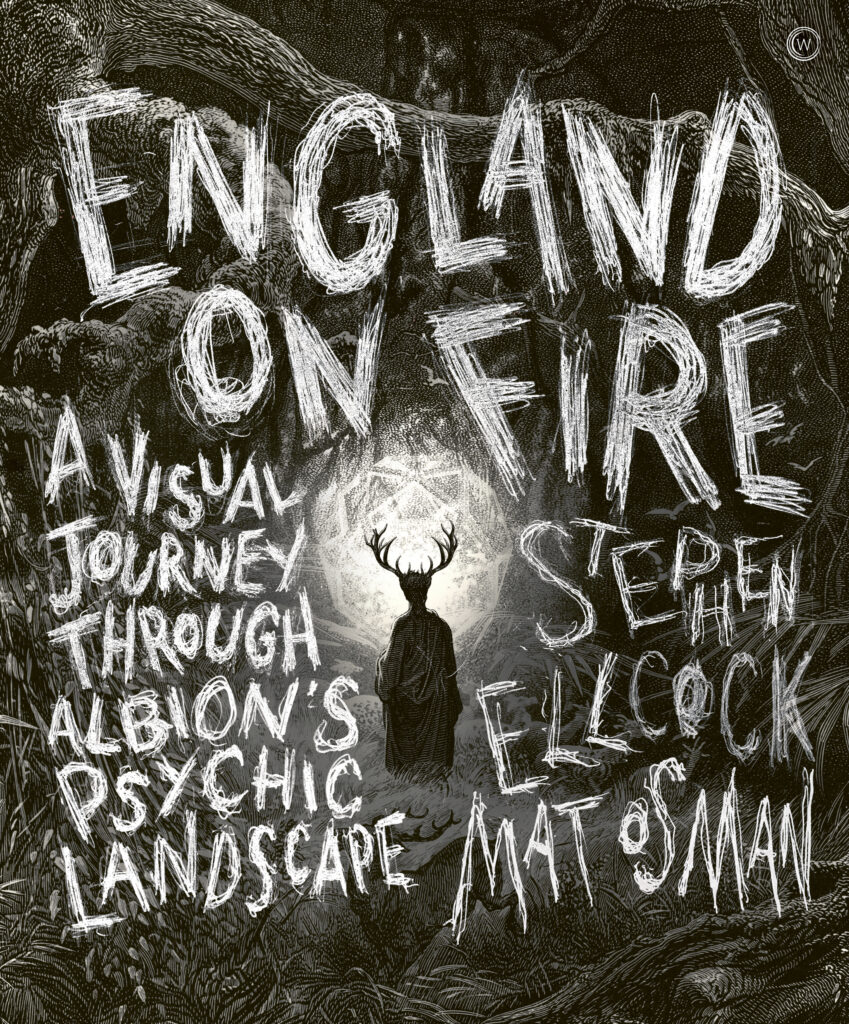 On ENGLAND’S ON FIRE by Stephen Ellcock and Matt Osman (Watkins, 2022)

Sumptuous Art smothers flame sparked by Osman and Ellcock
As the beauty within this book bridles against the marrying charge
Of the mind, as England, aghast at all that’s befallen is here
Invocated and celebrated too, for all time. As a visual journey,

This book’s quest is to chart England’s psychic landscape,
Which both authors have travelled through image curation,
Suede, Tarot, sacred soil studied and social media’s ghostly stare,
And all to find the lost streams of a tear stung past leaking

As England becomes Shakespeare’s shipwreck, ‘salt raw and
wave beaten,’ as the midnight shore meets fate’s scheme.
England becomes animal with this visceral and near versed
Description; ‘breathless into the hills,’ it scampers, like a wolf

With a wound, or fucked fox, as motherless children at play
In moon stained, timeless ruins make word art beside
Paintings that even Pandora would keenly contain in her box.
George Frederick Watson’s ‘Sower of the System’ observes,

As does John Martin’s ‘The Deluge’, while images from
‘The Tempest;’ from Rackham and Kiff crash like waves
Onto and across every page, which come alive as you
Turn them, as if in writing and curating Stephen and Matt

That begat them, before weeds and wildness induce
A former Eden in England in which Nature’s spelling
Reveals how each starting myth was begun. Ellcock follows
The shapes,  from arterial branches to Wifi networks;

From ‘whorls of hair,’ storms brewed in teacups, and ‘rushing
downhill into winter: England’s homescreen,’ His vision surveys
And sanctifies frame and footstep, with the beauty of John
Henry Dearle in his eyeline there is both riot and rabbit

And a touch of the attendant stars snatched in green.
The images captured here are those all Gods would favour.
From Tacita Dean’s Gouache photo, ‘Crowhurst,’ to William
Henry Fox Talbot’s Oak Tree. The great Bill Brandt carves
A swoop in a doom dark hill, his lens glooming just like

An overlord’s judgement on land and survival as well as
Those ripping the rivulets of the free. Drawn by the scent
Of flowers and song, Ellcock follows ‘Rebellious Nature’
To Tyburn, where England’s shallow grave achieves

Headstones and where by those dead beds, Ellcock’s
Ghost marked torture boy blooms and leaps. The boy
Is now our guide, even if we are interlopers, with England
As a ‘marooned ark full of older, odder beings,’ He charts

The dark’s chaos in order to sow what death reeps.
Fuseli’s Mandrake and Dadd’s ‘Crazy Jane’ each bare
Witness, as does Julie Goldsmith’s haunted and haunting
Baby Shelley, De Quincey in childhood and Ann of Oxford
Street. Her tender sprites mark our gain as we feed

On William O’Keefe and Nicola Tyson’s bird screeches,
Wwhile WS Hobson’s ghost photo reveals the thrill
And threat we will meet. A Max Reeves Golem Scarecrow
Completes this psychic-panorama, as both glazed

And gruesome, what sprouts from earth echoes roots
Which stem from the core of the country we live on.
Modern life is scar now and acne, and it is these sacred
Acres that give rise to protections we continually crush

Under boots. And so the Tyburn Boy takes us on,
From Marble Arch to Stone Circle where coded England
Makes dashes from lintels and dots from stone rings.
A pair of ‘dress up druids’ appear espousing the battery

Charge Stonehenge hinges, as if the setting of the stones
Conveyed meaning, in the wake of myths moving
Between the crumbling crowns of dead kings. But by
Dragging them ‘across the rubble of England’ their lasting

Position is rendered as writing, or scoring perhaps.
But from whom? Aliens? Gods? Or Merlin’s (Alan)
Garnered Sleepers? The remains are clues. Clues are totems;
Suspects watching keenly as time’s detective Draws closer,

Not that a final reveal ever looms. From Austin Osman
Spare, to Ben Edge, to Ithell Colquhoun, and Jackie Morris,
From Derek Jarman, Barbara Hepworth, and Jamie Reid,
The evidence retains energy as each time spent stone

Becomes tower, and text and image and travel combine
In a torrent of stimuli to exceed all drugs, all drink,
As looking becomes the narcotic to quell and fuel freely
As book and stone charge us, just like the druid described

Battery. The Way is revealed as Oxford Street becomes
All streets. The Boy at TK Maxx shows how echoes
Of carriage and cart can be heard. This is seen in Grimshaw’s
‘Evening Glow,’ and Bill Brandt’s scored line through nature.

In Paul Nash’s thatched engraving and George Barret Jr’s
Beautiful Hastings green. England’s ways wash like waves
From the purity of the paintbrush, from Spencer Gore,
Roger Fenton, back to Odiricus of Rome’s Westminster

Abbey scheme. This book is time travel at once and
In reading it one moves forwards; into a future informed
By the past’s dare and dream. Myths, Magic and Ritual
Break through, as the Tyburn Boy tells his-stories.

Warding off the dark, he speaks clearly of the immigrant
Song we all sing. We are all bastards here, all foreign bonds
Bound together; from St George and the Dragon, to Beltane
Birthing May Day, with even Saturnalia sounding the much

Concrete framed Punch and Judy booth is cloth totem,
As C. Turner’s ‘Witch surfing on a sieve’ storms in
Teacups, while Pinkie Maclure’s  Green Man searches
For the wilderness plan on light screen. And yet

Enchantment is all as the Tyburn Boy tells us.
‘England is a cuckoo grown huge among its sickly
starlings.’ The changeling land is glimpsed briefly as he
Blows through a dandelion clock for our scribes.

But while they ride butterflies and vampire bats,
They dream of us; here in the grey world we are
The star stuff illuminating night’s vibe. Cows eat
KFC, amidst the nitrous cannisters left in skate parks,

We can easily picture how each special spirit’s
Displayed. Separated winds weave, as light and lines
Lace together. Stephen and Matt observe closely
And through their loving look, maps are made.

The dark and bright worlds combine, in search
Of lost inspirations,  and no doubt resurrection,
Enabled here by these pages, which each become
Jewel and jade. Aubrey Beardsley, Paul Kindersley

And Lina Iris Viktor, all fielding images from
The Other, which Enclosure now stores. As the locked
Room of the heart is set in the terrain the heart bleeds
For, be it Ravilious’ White Horse on fleshed hillside

Or, Balthazar Nebo’s ‘Allegory of Fortune’ whose
Depicted world rider appears in the sky to keep score.
People sprout from the land in Leah Gordon’s plant
Portraits. Joseph Wright’s cottage on fire, contains

In dark oils life’s last light. All is enveloped and
Enclosed in this vital volume which feels in the hand
Like a gospel, made from stone and seed and foresight.
Arcadia is thereby attained, not daunting our Dantes,

Whose dual descent has remained horizontal as they
Move between time to verse vision in prose that sears
Through the sulphur, exposing the threat England faces
As its hothouse flower is cracked in Greenhouse glass

And death’s lime. From current bathers in streams
To Joanna Kirk’s Flower for the Future, each page
Is water dousing the dare of the flame. At Beachy Head
They draw up and see the Pirate ship we’re becoming,

Then each settlement is uncovered and the trap door
Beneath every street  finds its frame. The book’s language
Is art and provides its true landscape. It provides for
Each painting and digs beyond Heaney’s pen.

As Art fills the eye  you will also feed from what’s
Written. Encounter each image. And negotiate
As you do so to align with what it is it defends.
You can see your future right here, thanks to these

Sentence soothsayers, who provide through selection,
Fragments to make complete worlds, from planet
To paint and a proper vision for England, residing
In the art made within it and not in the dumbshow

Of politicians and culture who act up as adults
But remain at heart boys and girls. The growth is here
In this book and in the flames its two men are fanning.
Through care and curation the canary is calling,

Breast burning and buried. whilst both locked
And released from the mine. The answer’s in art:
Oxygen to true innovation. And drawn for our nation
And from it too for fresh times. Ellcock elevates

Everything, from contemporary to classic image,
While Osman provides the book’s bassline. In moving
From Suede to the sacred, what is first raised by fire
Will, when you feel the fabric of this ecstatic endeavour,

Teach you all how to savour, as well as how

to scorch the sublime.

View all posts by David →
This entry was posted on 14 May, 2022 in homepage. Bookmark the permalink.