From Earlsfield to the Eye: Sinclair’s Saints Meet Curran’s Carepentry 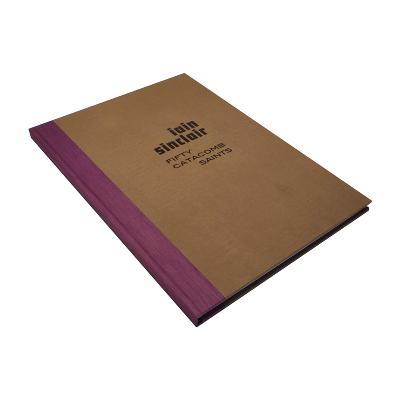 The known and unknown through word paint. Surfaces Undulate,
Phantoming Mould’s Mechanisms, as in five sections these poetic
Portraits transpose; one part Eden, one here, as the paragraphs
Scratch at perfection, exposing the failings that the commonplace

Can’t disclose. Chris McCabe’s  eloquent postscript performs
An authoritative autopsy of these anthems, that resound through
Ghost places, auch as Abney Park Cemetary, where Sinclair
Witnesses, while listening to the leavings of figures possessed 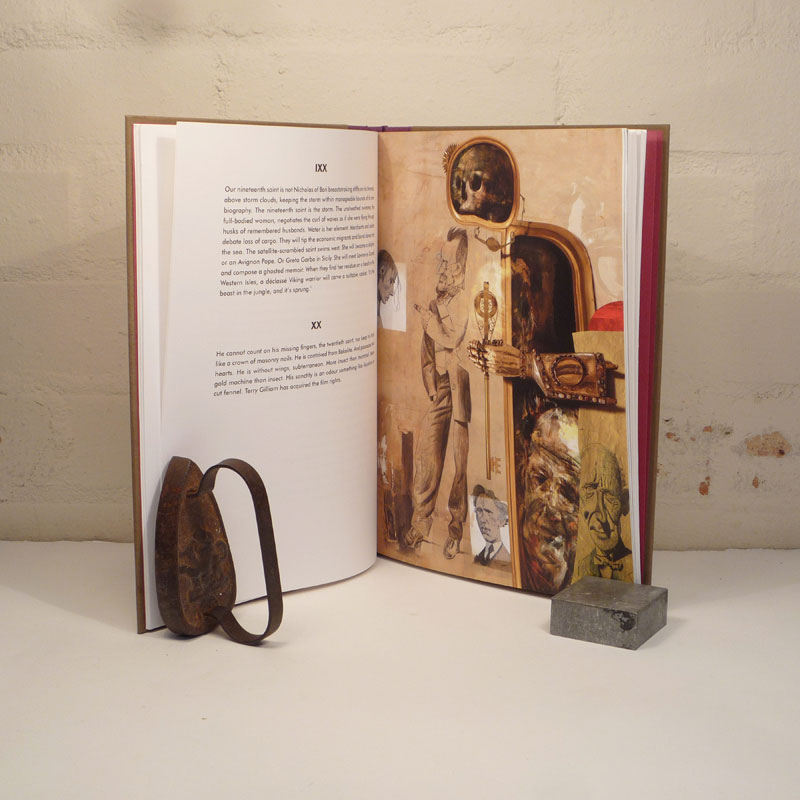 Of more presence and purpose than the present day’s pedantry.
Catacomb Saints, or the Katakombenheilige baggage is weighed
Down by catholic corruption as the Church of 16th Century Rome
Stole dead icons and put them on sale to salve sin, inventing

Both story and Saint for the God-gullible,  as if, from
The graveyard what the flesh cannot find, the soul wins.
‘The smile of the first Saint is hard black sugar,’ Sinclair says,
As, ‘Drifts of Alaskan snow are coded with runes of yellow Wolf piss.’

His dense sentence symphonies music through as each image
Annunciates grandly, while each one word riot reveals both
The poet’s command and his kiss. Sinclair searches for such
Saints everywhere, with the second one churched and coastal;

Witnessed, arms spread in a window under ‘distant stars
still uncounted’ in a place where levitation is leavened
As accompanying sparrows bristle and burn in a bush.
In reclaiming the wrong of a former age, Sinclair’s Timelord

Echoes Eliot pre The Wasteland, as well as a Bunuellian
Babe in Saint’s raiment due to the work and the willing
Of a supple prostitute’s poise and push. The Fourth is
A homeless ‘boneless tarpaulin hump cooked without spices on

the broken boards of his chosen dinghy;’ a fallen Lucifer
By a lamppost, who, in a turn of phrase to transform you
Is seemingly ‘older than wood.’ Anthracite rinds, ruffled lakes
Are part of the terrain his shape measures and it is these

Flint impressions that give spark to the flame of gain’s
Good, as we start to see what this book conjures forth,
Under the care of publisher Michael Curran, whose
‘Carepentry’ binds and fashions what no larger printing

House ever could; proof of the true artisan, which
These days we can only carbon copy with coffee,
Whilst here, with hydraulics of the primitive kind,
Faith’s declared, as Curran, a former carpenter carries

Each precious page for the poems just as Christ carried
The message of both the Christian curse, and its care.
Meantime, Sinclair works (and walks) The wilderness
Machine for this printing, as publisher becomes poem 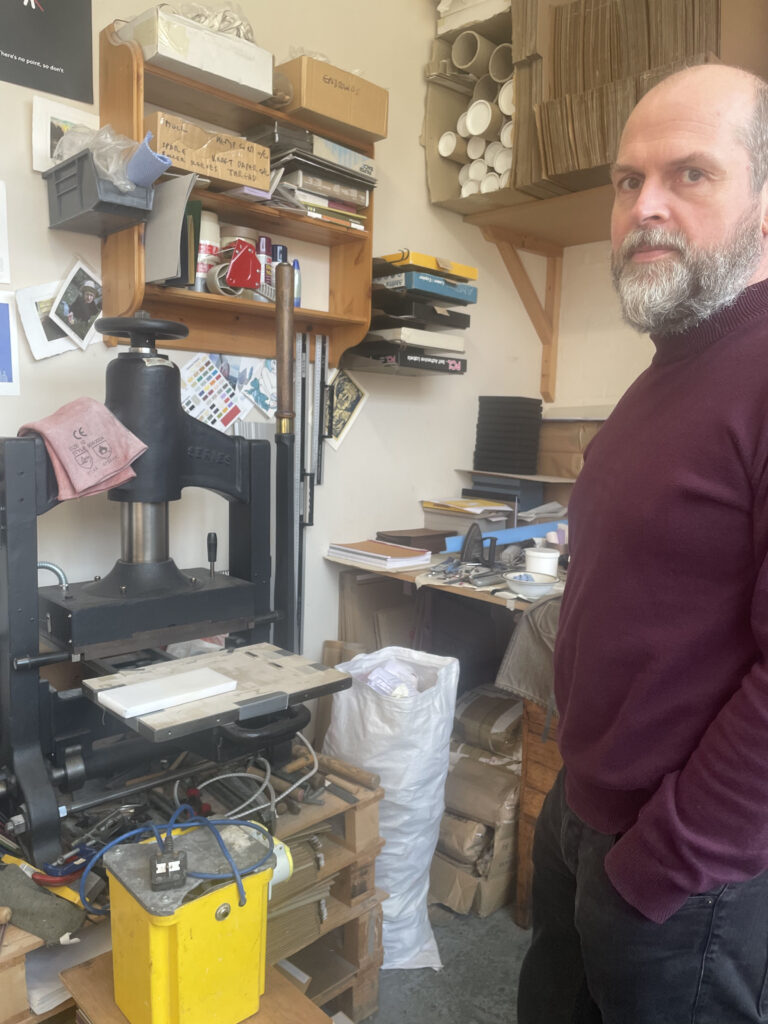 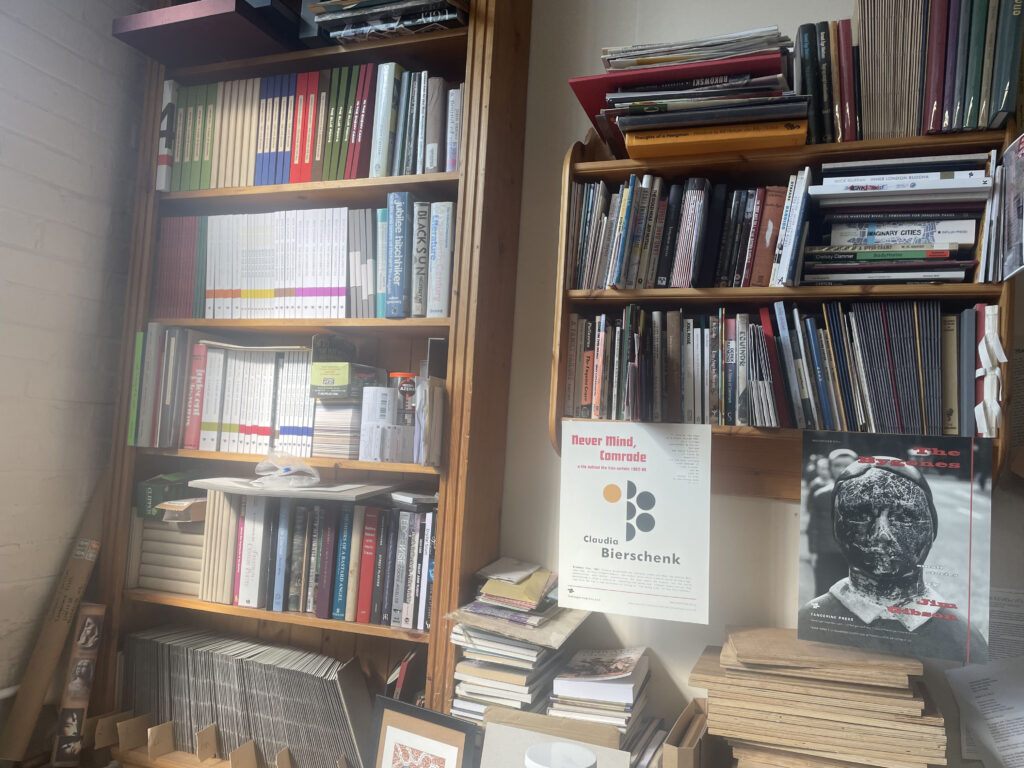 And what he publishes becomes creed; for there is a way
To live by these words and by the wisdom revealed
Across image, as Palermo meets both pueblo and parsley
In this word-swirl of magick and Iain Sinclair’s sainted

Screeds. Books begat their own culture and here,
A proper climate is created, containing ‘rainbow nimbus’
As ‘ovaries spring emerald moss,’ in paragraphs made
To prize; at once graspable, gruesome, solid, and yet

Also riven with beauty, as Curran cranks at the lever,
So as to make sure all’s embossed. Dave McKean’s
Drawings enchant as he illustrates Iain. They seem
To be made of gold and metal, even when set down

By pen. But each portrait performs as they glare
And glisten straight at us, making the printed page
Bubble, as if the paint and ink were excited
By the special approach Dave defends. And so the saints

Shimmer on, from a Mexican bound DH Lawrence,
To Charles Olson in Yerma writing to Robert Creeley,
To a charcoal portrait by Frank Auerbach; a proper
Catacomb scrape, or finger marked, smeared autopsy,

The ashes applied from cracked fires as the medium
Itself leaves a mark.‘The sea tonight is a shivering spider’s
hammock in an oxidised crittal window,’ is proof enough
Of the pulse and the poem whose Sinclairian craft

Curran serves, as Iain’s eye envelopes the poetics
Behind chosen moments, with each one’s tenancy
Now made mythic in a modernist  word world
Where it manufactures the mystic for what even

Those who disbelieve might deserve. ‘An irish sailor
cannot abide the convulsions of the sea,’ while ‘red Vincent
in painter’s LadyBird legend’ is cyclically ignorant,
As he word walks the Medway, upto  Childish’s

While Margaret Thatcher medusas as a ‘corvine
Bishop parches at Hastings groyne.’ Cyclops trades
His gold teeth, as the one eyed Raoul Walsh part watches,
Aping Iain’s book named for Jack Elam and the single

Oracular stare past words joined. In other images;
Fools dream of cheese, while Vorticists smoke enamel.
The secret ministry of frost is an emblem of spiritual agency.
Rare salts breach coarse pores, held by fishermen’s twine

For dreams floating, while England is just poor people
And Dickens whilst under the pariah Uriahs for whom
There should be no clemency. Such visions astound.
And there is the sound of search on these pages, to which

Curran listens as he makes each dream Tangerine.
Curran truly cares for these works which occur outside
And despite cold commission, allowing Sinclair
To reconnect to the culture hrom which his first

Chapbook artfully manned his first schemes.
There is then a way to read what’s set here as a new
Form of Bible. Not a Gutenberg, but one greater,
Because it is both book and tree; still part of the skein

That was skimmed from pulp to press and word anvil,
As one man sits down to write it and a second one
Remains standing in order to purvey poetry –
Of the highest stamp, as well as the hardest.

For this is writing as challenge, satisfaction and seal:
The full meal, which has been prepared by three
Cooks as they curate craft and kitchen to feed
Inspiration’s bright fire and quickly advance

The pale real. And this is only half way through
The book – as it is not my place to contain it –
But to simply supply a taste and a hunger for what
Iain Sinclair, Dave McKean and Michael Curran

Now mix; from Earlsfield to your eye, and from
Jack the Ripper’s Whitechapel, these non-scarlet
Tracings are a Draculean bite and drug fix.
You should dream of this book, for there is a sense

Of Shangri-La to its pages. I was myself privileged
To visit and catacomb in with the papers, as Michael
Kindly invited me to its preparation , so that I could
Sit and take notes, write and see. It felt like that scene

In Citizen Kane where Thomson reads Bernsteins diary.
And so it proved. Its stayed with me. As each word
Strikes I’m made saintly, which in a day full of demons
And at an imprisoning time still feels free.

Hunt this book out. Marry someone who now owns it.
Chant its name a la Borges and let it retain regency.
These words rule the waves broadcast between visions.
The Saints are served. Now, the earthbound stare down

The static to aspire to fresh frequency.

View all posts by David →
This entry was posted on 12 March, 2022 in homepage and tagged David Erdos, Ianin Sinclair. Bookmark the permalink.