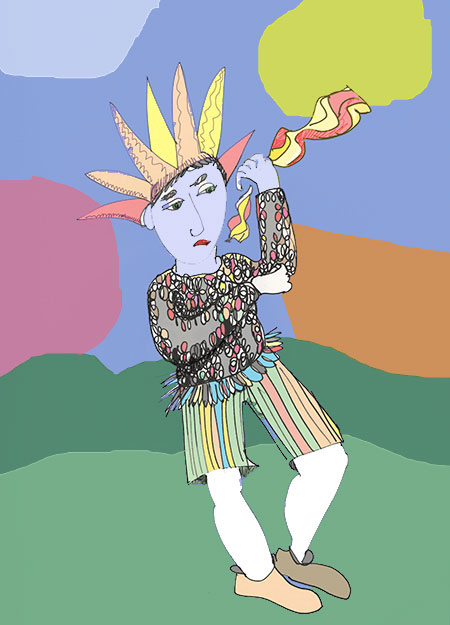 Caesar, when that the traytor of Egipt

Theresa, when grasped by the tiny hand of the tyrant,
presented on a plate the guts of the NHS, and smiled,
as his long red tie tickled his glans, though she sweated
beneath a grand’s worth of leather trousers, unaroused.

I jetted trans-Alpine to our ‘European allies’ with friable promise.
If only I could rope Remoaner Reginald Pole to the pole,
slop inflammable beard balm over his hipster bush, my eyes
watering at the garlicky aroma of barbequed traitor, and

disgorge my stomach as he blisters! Duplicitous spider am I:
her fake furs and my fake news brushed smooth and receptive
to time and season, de-briefing, and briefing, on fake leather couches.

No other way to say this, so I don’t: We must quit loving!
She grabs me by the man-pussy and I roll over into deceit’s
thick web: I’ll tell anything, promise everything.

Look at the glowering greed in their eyes.
Many (almost most) weep to hear the Trigger triggered
while talk of ‘Henry VIII powers’ taxes the dirty mind
in a Kentish paradise of ‘villages and hamlets’ where
guys in slacks sip bitter and compare the legs
of Mrs May and Nicola Sturgeon.

Between misery and wealth, principle and ambition,
few are glad, and the Many have no Plan B (or A): but
soft Regrexit for Hard Brexit as repealers unspin.

Espy through Edenic cobwebs of gardening leave
spun across the complaints and appeals procedures,
those frost cravings delivered to Bruxelles on spurs of fire.

Brought to such extremes thought freezes
though its bearer stoops unthinking into flame.

If honesty bubbles on the hob unboiled
If mad policy tempered by my diplomatic tweaks
breeds festering slough thwarted desire
If you think less of the electorate than of the elect
If the Brexiteer’s battle-bus with its cashback payback
U-turns on a blind corner (as IDS pleads to camera!)
If every thought (Quiet Wyatt!) cartoons on my brow
as my croaky voice now gruff now falsetto (and false!)
blurts or tweets the alt. facts bare-faced for you
If Bojo’s ‘piccaninny’ show is hardly worth blacking up for
If wailing sirens on Westminster Bridge burn sorrow into anger
If feverishness for athletic tricks freezes out my old mistress
If I’m destroyed by love riding hard
the fault is mine the irredeemable convenience yours
.
9th April 2017

Tweet
This entry was posted on 11 May, 2017 in homepage and tagged nick victor, Robert Sheppard. Bookmark the permalink.