FROM THE LIGHT OF LOSS 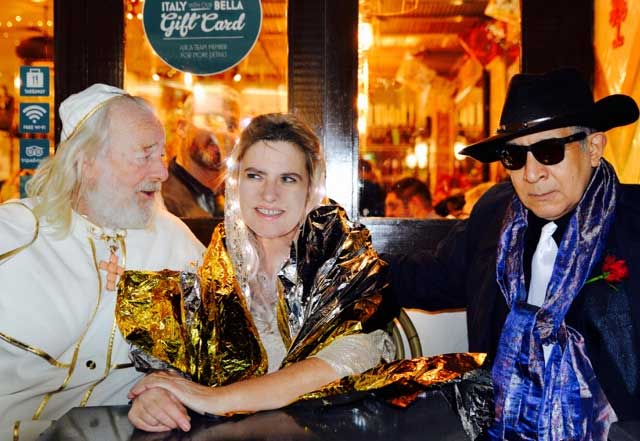 Delilah Jay takes a deep breath and walks into the late Soho Day.

Fighting for the rights of those used by overpowering forces,

She becomes Virgin Mary, dressed in light and gold, as God’s wife.

The point is to prove the line of intrusion,

Drawn by those loved and followed,

In her case a Crimelord, as evidenced by her banner 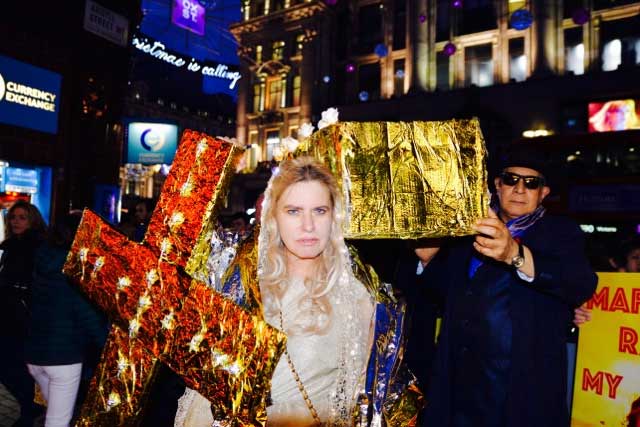 If not the body, the soul, that she  displays now in London.

An Art as Action performance in which she demonstrates that past bind.

In which a lost dalliance has created defiance, for which she walks now

In protest against the eyes that averted, may very well choose to stay blind.

Bedecked in light and the cross that represents all who suffer,

Be they discarded or holy, or even both, she strides out.

From The French House Pub, whose past contains the starred fallen,

Along Frith Street and over, towards Oxford Street’s frenzied shouts.

It is Christmas and look, here comes a reminder of love that was sacred,

Ruined at once by the men, who take a woman’s life into theirs

To suit their own cause and quickly satisfied pleasure, to then reject them,

Without any visible line of defence.  A son came from this, most unholy union,

Echoed now in the shimmer of golden light and cut stars,

A child soon removed from his natural mother, just as Mary’s was,

Given over to an uncertain crowd and time’s bars.  Delilah protests her loss,

As she turns her entire self into statement.  Defined as loss, she now glowers

With all of the light from above.  As London darkens, she shines

Amidst the clammer and clutter of the self centred unseeing,

Who, removed from all others help to create a world in which love

Is a force to be mourned rather than celebrated, as this procession proves;

Jay’s cross burden, drags on the road like past, leased. It is Christ’s Calvary,

As well as the child taken from her, ghosted again in the pillow that represents

And an imperious Papal figure, showing the unwholesome workings of Rome,

Here then, is the Italian Curse, underlined by its two constitutions;

Of Crime and Faith. All who follow allow some form of strain in their home.

Delilah has none. Expelled from hers by this lover, she has taken to the roads

Of all countries in her glamour caked camper van. With her partner, Laurence,

Her dogs, her books, her model past, she now journeys, reminding all

Who bear witness to beware the frightening limitations of man.

Who cannot care for too long about the real things that matter.

As what they brought close quickly challenged their suspicious need to stay safe.

Just as the Devil still hides, painting his plans on the darkness.

And God too, delivers his coded messages without place.

Those who roam seek the truth. And art is concerned with such journeys.

Today on a packed street in London, a wholly active truth glistened out.

Amidst the tourist traps and the glitz and the commercial sheen

Placed above them, thousands of people bore witness to one woman’s message.

It was a sacrifice for all Mothers who, despite distance, call for what’s vanquished.

In reclaiming love, the heart’s loud.  Her ironic procession showed this; 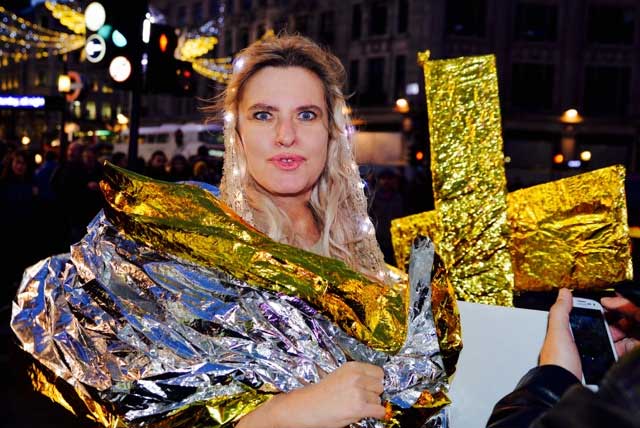 It revealed the trespasses, that those who walk through us inevitably

Leave behind. There are scars on the heart but they mark the soul also,

Delilah Jay shines light on them in her walk today and her life.  She was consort

To a king whose golden house is closed to her.  But just as the night came to claim her

Her inner resolve became bright. So she walks and she shows how we cannot let

Those in power, be they voted in or on pulpit or masked in the dark have their say.

And all children. A one woman action for which we should praise the conjoined

And personal bible of Laurence McGibben and Delilah Jay.

View all posts by David →
This entry was posted on 15 December, 2018 in homepage and tagged Chris Gaffney, David Erdos. Bookmark the permalink.