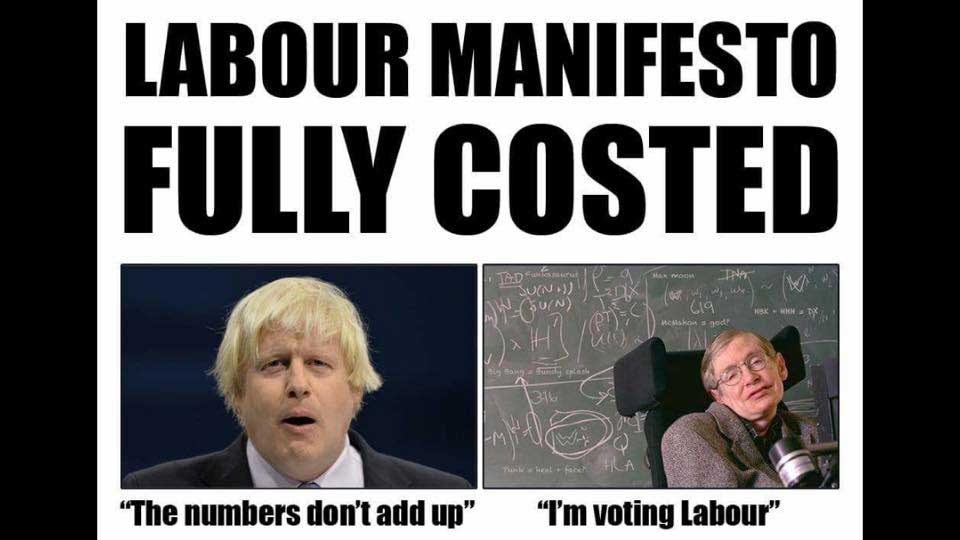 Yesterday in a thoroughly unsurprising turn of events Conservative thinking once again found itself at loggerheads with logic when Stephen Hawking, widely renowned to be the world’s most intelligent man, publically announced his support for Jeremy Corbyn and The Labour Party.

Top Conservative and untrained American aristocrat Boris Johnson, who recently argued Labour’s economic strategy did not ‘add up’, waffled like an excited baboon trying to steal a banana, ‘Well, yes. See here now. I’ve never heard of any these chaps on your list for a start, or most of the places now I come to think of it, but I know … for a fact, that… er let me see… that lots of eggheads out there currently support the Conservatives and their election direction. Oh yes. Let me see now. In the blue corner, so to speak, we have, firstly and probably most arguably, Katie Hopkins, a person whom I feel we can all agree is… er… known yes, ah ha, for her mental dexterity, if not many other… things. Next, number two if you like, I’d would mention Gary Barlow or as I like to call him ‘the thinking man’s mistro’. Yes, I rather like that one myself. But, of course, lastly, and by no means… er… least, and he knows that I mean that sincerely, it’s my old friend from the Pimlico lido himself; the musical genius Simon Cowell. Now let me tell you all something here and now; everyone single one of these brainiacs is a successful millionaire just like me so, in turn… What was I saying? Ah yes. They must all… er… yes… be clever. Which, I feel. by itself, is enough, so to speak to, let me see now, to… er… make even the most ardent Marxist out there turn blue this June and vote for us; the Tories.’

Steven Hawking, PHD CH, CBE, FRS, FRSA theoretical physicist, cosmologist, author and Director of Research at the Centre for Theoretical Cosmology within the University of Cambridge, commented from his wheelchair, ‘There is nothing complicated about the theorising that led me to my decision. This is something so simple everyone can understand. Voting Conservative is purely illogical. That is why I advise you to do as I do on the 8th June and vote Labour.’

Theresa May booed and heckled with shouts of ‘vote Labour!’ on trip to …

View all posts by Ethan →
This entry was posted on 8 June, 2017 in homepage and tagged Ethan Harrison. Bookmark the permalink.

One Response to Fully Costed?