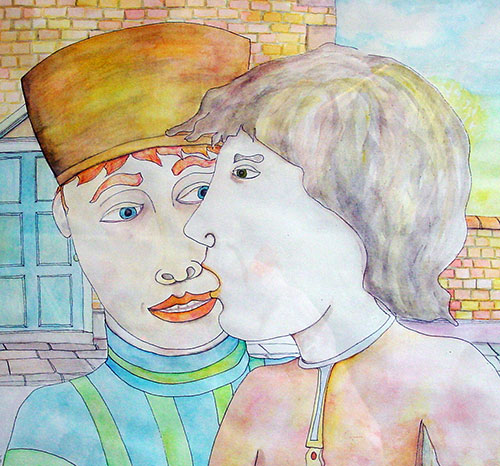 I shopped around for printers – comparing prices, like they say you should. In the end, though, I just went across the road.

500 for forty pounds. Bit pricey, perhaps – I could’ve got cheaper. I paid for the convenience, I suppose – just over the road. They were really nice, as well – really helpful – and they’ve got an office dog.

Some of you, at least.

You are, though – you’re going to die. Walking around like that in a world all your own. Wandering the streets, heads down, gazing at your phone – listening, as well – great earmuff earphones cancelling the world around you.

I mean, no matter your fellow pedestrians – let them watch out for you. Half of them aren’t even on the phone!

Building sites likewise – the fear of cranes and falling girders. Is getting crushed your problem? No – it’s up to them to ensure “best practice”; it says so on the hoarding.

And as for getting mugged – well, chances are they wouldn’t even want your phone – it’s weeks since Apple launched it.

You needn’t even fear the traffic.

Not, at least, the normal, everyday traffic.

But what of the abnormal traffic? What about those men in the vans – the ones who come with carnage intended?

They want you dead – and you’ve no idea when they’re coming. No idea at all. They won’t be creating a Facebook event.

They can come at any time and any place – and where will you be? There you’ll be, wandering along, in your mobile cocoon, entirely detached from the world that surrounds you.

Yes, you are. You won’t see them coming. You won’t hear the screams to warn you of the danger.

But it doesn’t have to be.

That’s why I made the cards. My intentions were good. I spent money on this thing.

Behaviour has to change, and someone needs to take the lead. So I did – I took the lead. A pocketful of cards, and every time I saw someone in danger – walking along, plugged in, plugged up, plugged out – I’d stop them and give them a card.

Perhaps they should have said a bit more, those cards. A bit more specificity.

“You’re going to die,” I ought to have said, “as a result of sensory self-deprivation”.

Bit of a cardful, though. It would’ve diluted the message.

But then, they didn’t get the message, so…

No. No. They didn’t understand.

The Police didn’t, either. Didn’t want to understand.

My lawyer says play stupid. A statement of the obvious – we’re ALL going to die, that’s what I meant.

You are. YOU are going to die.

But not at my hands. Far from it.

I just meant to help.

I meant no harm, only good.

I never meant to threaten anybody.

How could they think otherwise?

Tweet
This entry was posted on 8 November, 2017 in homepage and tagged nick victor, Robert Cohen. Bookmark the permalink.

One Response to Good Intentions