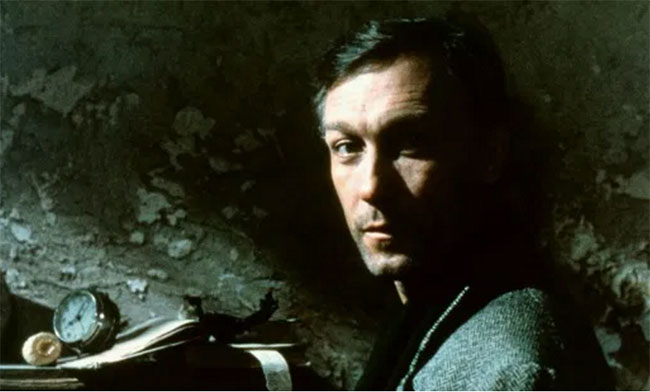 Sickening beauty falls at his feet
everywhere he goes he tires of it;
wishes he could be exiled
like the motherland from Sosnovsky
in an ancient Roman spar.

where the man with wet shoes
walks on water, fully clothed in half candle-light,
or sits troubled, ankle-deep
over a sulphured bicycle wreck. Yet, he’s the one
they cast out.

In this un-natural half-light Andrei’s reflection evaporates,
his solidity dissolves between the plumes of mist;
between daydream, night vision and the subconscious chasm
memory attempts to net with logic; he understands
– for the first time – light is chosen
by shade or blind. It isn’t enlightenment
where life is found.

Obscurity is where he fumbles
to discover beyond sight substance not bound
by light – in their anti-clockwise interior
pitter-patter parallelogram, raindrops
scurry across the floor to their beaded cantata
– he nods involuntarily,
lets the bed bars envelop his thoughts.

Part of him stretches toward them
in the same room, Maria, Eugenia,
both beyond his stretch. Their impotent yearning
resolute as recompensed Madonnas. One resigned
one exasperated – when so much love is barely sufficient
to comfort one another and
bridge the divide.

All the way back to Moscow he swore
he saw Sacha’s shadow slip into skin, through the bathroom window
and settle his visceral body across the quarried veins,
at the side of the bed they felt each others’ hearts
rebound. Home is there,
just beyond fingertip,
each time he closes his eyes, home,
where everybody goes to die.

The Russians couldn’t take it
from Sosnovsky; nor from Gorchakov, his child chasing Sacha
through the puddled track – reflects through mud planting their fleeting feet
firmly in the ground. Intuitively they turn
toward him, follow his eyes, not needing
to know where he is. Because of them
he knows poetry is untranslatable, worthless
when read.

He stops trying
to place his finger on the transient
immortality of souls met through madness and music
just in time to do something meaningless
with his life.

Let the fire in his belly
and flooded basement extinguish
the littered streets that once sheltered,
to dismiss in his mirror image the sane man’s intuitive fear
drowning cherubs in the bottom of his plastic cup.
Light a half-candle for the rich, cup it, keep the flicker
alive… alive amidst the breath-taking sulphur
until it is burned at both ends.

This is his only way
back to her fathomless
grace, that lilting soliloquy,
the only beauty that disturbs him,
embracing the sanctuary
of home.

Author of non fiction – ‘A Chance For Everyone: The Parallel Non-Monetary Economy’ (2020)

Tweet
Tweet
This entry was posted on 19 June, 2021 in homepage and tagged Kendal Eaton. Bookmark the permalink.