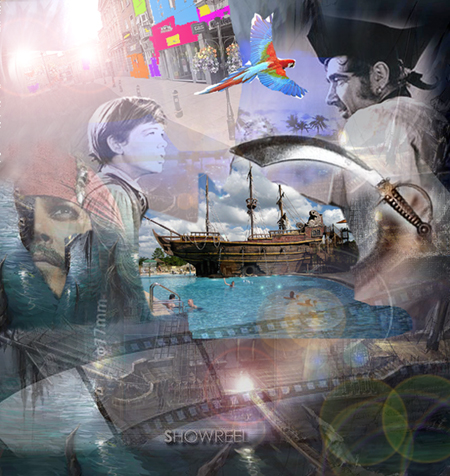 Entered my dreams.
Silver’s gnarled hand pierced my cranium
Stretching down into the dark to snatch at my soul.

I’d curl up. Cowering. Sweating.
Ensnared by a dream-film
Whereby my world was being transformed:

A transgressive pirate had come to life
Upon a screen, then sneaked into my psyche,
And from then on, in waking hours, I’d imagine

Disabled people with crutches
Queuing for prescriptions outside Boots,
As having parrots on their shoulders

And their being about to cackle, ‘Aarrgh Jim Lad’,
And to call out ‘Pieces of Eight’ and to sing, ‘Fifteen men
On a dead man’s chest’ whenever I’d pass.

I was nine years old.
Silver’s Robert Newton would now be
A hundred and ten,

And yet in dreams he can still trip up my enemies.
On random nights he’ll slyly stick out his wooden leg
To tackle the unwary. An ancient, hoary ally

Who still lays them low with his airborne crutch
Aimed at their necks, felling them in a trice.
He grins, and maintains his perfect balance.

Flickering celluloid from the Nineteen Fifties
Has transplanted him into the mind’s eye
Where he now lives – a household-god, cutlass flashing.

“Always be yourself,” it’s said,
“Unless you can be a pirate
Then always be a pirate.”

Films pretend to be more important
Than real life and lay claim
To heightening awareness,

Although most are flim-flam
And all their treasure fairy gold –
Not ‘Treasure Island’,

Where authority exists to be disobeyed
And a small child’s grim reality is nudged aside
By a far grimmer, spine-shivering Captain Flint.

Through a dream in the dark, a security leak from the future,
And that hypnagogic state between sleeping and waking
Where things make sense and glow with incandescent light.