This is a beautiful book. It has a lovely textured cover with embossed lettering and a laid-on photograph, thick semi-glossy paper and is one of those books that smells glorious too. It’s also kind of weird: there’s no title or half-title page, let alone an index, it’s straight on with the photographs, which are mostly on the right hand page (only) and have no captions or titles. I like that but it also leaves me wondering who some of these people are and where they are hanging out.

That list in the previous paragraph are just the people I recognise. There are plenty of anonymous and unknown punks and alternative types in these soft-toned black and white images. I like that they aren’t all hard edges or high contrast, also that there are crowd shots and some other photos seemingly taken from the hip that capture boots and wine glasses or empty stages.

It all seems familiar and both unfamiliar and historical. My first trip to Manhattan was in 1980, and although I remember how grimy and dirty it was I can’t claim to have known where to hang out or see this music. I was broke, and staying in midtown West; I spent most of my time skateboarding around because it was free. There were kids dancing and rapping on big sheets of cardboard in Central Park, and lots of beggars and hustlers selling stuff on the streets: shoplifted books, knackered LPs, worn out clothes and bric-a-brac.

Nowadays NYC is all cleaned-up, the bars are pricey, people say it all happens out in Brooklyn now, not Manhattan, and most of the East Village is gentrified and safe to visit. You can still walk for free and enjoy the view, but it’s harder than ever to avoid being a tourist.

Gary Green’s photos are inclusive and generate a ridiculous sense of camaderie, a desire for a past I never knew beyond seeing Blondie and Television play in London, and hunting down and buying obscure releases from the later, artier end of downtown music, in places like The Knitting Factory, Other Music and Downtown Records. It’s from a time, and one of the places (because London and other cities were like it too) when anything seemed possible: you could form a band and play a gig, rebel in your own way, and afford to pay rent (or squat if you had to). The abandoned corners of the city, complete with graffiti, cigarette ends, broken bottles and scuzzy bars and cafes, were there for the taking.

Back then, when midnight came around, the day was just beginning. This is an uplifting book that looks the past straight in the face and returns its gaze. It is beguiling, seductive, informative and a definitive document from those times. I haven’t felt so inspired for a long time. 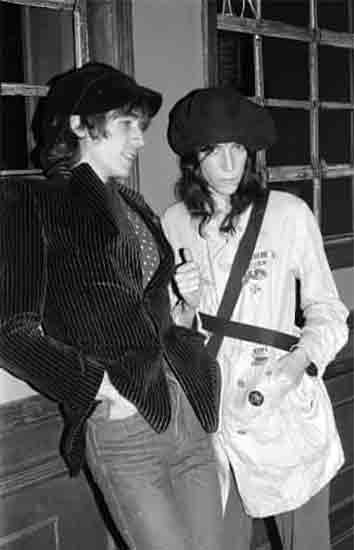 View all posts by Rupert →
This entry was posted on 6 June, 2020 in homepage and tagged Gary Green, Hanging out Downtown, Rupert Loydell, When Midnight Comes Around. Bookmark the permalink.

One Response to Hanging out Downtown