Despite the United States of America’s self-mythologizing
Its megalomaniac Empire began its career
By eating the freshly killed corpses of those whose country it was:
The settlers made their State from transgressive horror.

Upon landing, the Pilgrim Fathers – the colonists’ Special Forces,
Some religious fundamentalists from Europe –
Ran out of food, but judging the indigenous people to be “savages”,
They arrogantly spurned their offers of help. 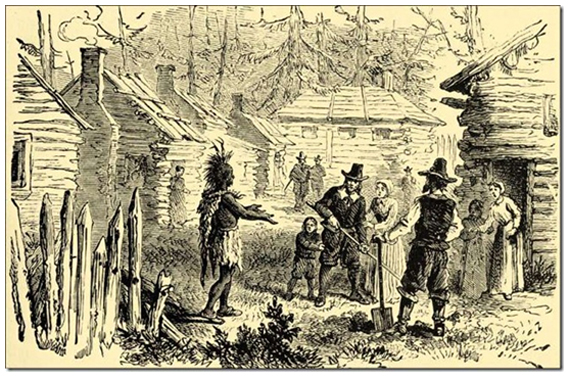 Instead the settlers hunted the local game to extinction,
And, having no idea of the proper crops to plant,
Were unprepared for what they called the “starving time”.
In 1609 they faced famine, as well as drought.

They ate their horses, their dogs, their cats and their mice;
They made stews out of the Mayflower’s rats.
Having fished out the rivers, they sought nutrition in leather,
And in desperation chewed their own boots.

One settler named George Percy would leave an account
Of the Pilgrim Fathers’ life in Jamestown:
“…notheinge was Spared to mainteyne Lyfe and to doe
those things which seame incredible,

As to digge upp deade corp[s]es outt of graves
And to eate them. And some have Licked upp the Bloode
Which hathe fallen from their weake fellowes…”
Percy claimed his fellow Americans “could not wait

For their fellows to die before drinking their blood.”
And he recorded that the “Extremety of hunger”
Forced them “secrettly in the night
to Cutt downe Their deade fellowes

From off the gallowes and to bury them
in their hungry Bowelles.” [1]
The US venerates its Pilgrim Fathers as brave pioneers,
But the country was created by zombie cannibals.

The settlers being incompetent at growing any food,
Regarded the Indians as a source of protein,
And those they killed in conflict didn’t stay buried long.
The settler, Captain John Smith, described the scene:

“Nay, so great was our famine, that a Savage we slew,
And buried, the poorer sort tooke him up againe
And eat him, and so did divers  others.. One another  boyled
And stewed him with roots and herbs.” [2]

The early Americans’ passion for eating Indians was widely known:
In a letter from Don Alonso de Velasco to the King of Spain
He describes how they  “eat the dead, and when one of the natives died ﬁghting,
They dug him up again, two days afterwards, to be eaten.” [3]

Again, one Robert Beverley tells how, “They eat the Bodies of the Indians
They had killed; and sometimes also upon a Pinch they wou’d not disdain
To dig them up again to make a homely Meal of [them] after they had been buried.” [4]

Early records show that the first Thanksgiving was held to celebrate
Some settlers’ escaping from the native population –
From some Pecquod Indians angered at their burial sites being robbed
By settlers stealing Indian flesh for their delectation. 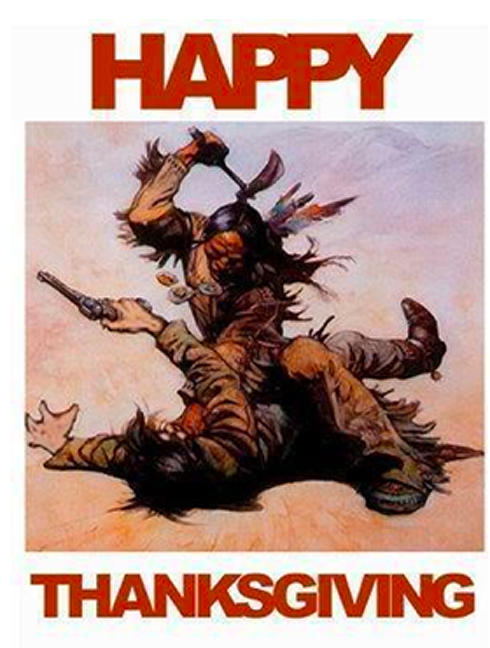 To justify the United States stealing someone else’s territory
Its early spin doctors would misrepresent the Indians
And, just as the US’s terrorist Empire now calls others terrorists,
The Native Americans were falsely claimed to be cannibals

The US hasn’t lost its taste for devouring human flesh:
From its thousand bases worldwide
Their horrific Empire’s killed thirty million since world War Two
Then enjoyed their valuable resources on the side.

Every year America comes together to celebrate
Its good fortune at Thanksgiving meals.
It eats tons of white flesh smeared with crimson sauce,
And is certain its God’s blessing how it feels.

Thanks to years of PR the Pilgrim Fathers belong not to history,
But to a quasi-religious ideal.
Established in wartime as a national holiday, Thanksgiving
Now spawns a patriotic fervor that’s unreal.

But to a less gulible cultural pundit it’s “nothing
But a toast to genocide.” [5]
A day for indulging in American exceptionalism,
And in an overweening national pride.

America eats 45 million turkeys on Thanksgiving
(Its President spares one in a facetious ritual).
Thanksgiving day is spent eating, and drinking, and eating
And the gross-out prompts a modest proposal.

Modern America’s callous division between its rich and its poor
Has led to 49 million of its citizens being in poverty,
Yet were it to honor its own traditions, it might dig out its rich,
And it might cook them, then eat them with impunity.

[1] George Percy, A Trewe Relacyon of the p[ro]cedeings and ocurrentes of Momente w[hi]ch have hapned in Virginia from the Tyme S[i]r Thomas Gates was Shippwrackte uppon the Bermudes An[n]o 1609 untill my dep[ar]ture owtt of the Cowntry w[hi]ch was in An[n]o D[omi]ni 1612; first published in 1922; original mss. in the Elkins Collection of the Free Library of Philadelphia, transcribed by Mark Nicholls, and published in the Virginia Magazine of History and Biography, 2005; cf also, Rachel B. Herrmann. The “tragicall historie”:Cannibalism and Abundancein Colonial Jamestown, William and Mary Quarterly 3d ser.,68, no.1,January 2011DOI:10.5309/willmaryquar.68.147

[3] Letter dated in London, June 14, 1610; cited in Alexander Brown, The Genesis of the United States: A Narrative of the Movement in England, 1605–1616, Which Resulted in the Plantation of North America by Englishmen, Disclosing the Contest between England and Spain for the Possession of the Soil Now Occupied by the United States of America . . .(Cambridge,Mass., 1890), 1: 392.