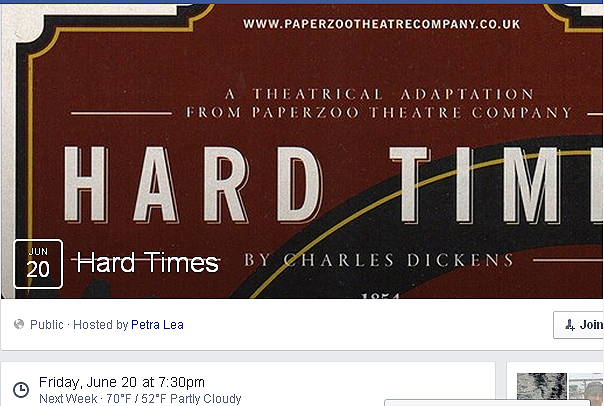 The Electric Picture House Artists Co-operative are excited to be hosting a production of Charles Dickens’ Hard Times by Paper Zoo Theatre Company.

The production tells the story of Thomas Gradgrind, pillar of the community and headmaster of The Gradgrind School for Boys and Girls, who teaches the children of Coketown, including his own, nothing but facts. Self-made cotton manufacturer, Josiah Bounderby, represents the wealthy industrialists who came to prominence in the 1850s. He may have money but he has no humility. Rachel Wood and Stephen Blackpool are the salt-of-the-earth mill workers ground down by the harsh realities of life, and Cissy Jupe embodies the wonder of imagination and a creative life as the poor daughter of a circus clown who shows Gradgrind the futility of his system.

HARD TIMES is the sixteenth production staged by Paper Zoo Theatre Company. Previous productions have included Samuel Beckett’s ‘Waiting for Godot’, ‘The Tempest’, ‘Much Ado About Nothing’ and ‘Twelfth Night’ by Shakespeare, and an adaptation of George Orwell’s ‘1984’ produced in conjunction with The National Media Museum, and featuring John Hurt as the onscreen Big Brother.