How He Wrote Us into Existence – A Fiction 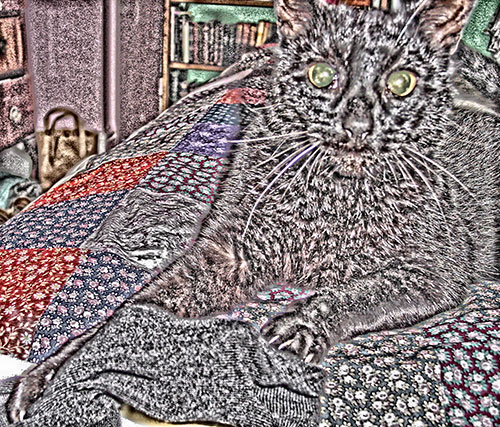 Poet ends his tale. I have been nursing a notion that it would disappoint us after the dramatic expansion, and it does what I have been dreading and perhaps perversely wishing for, with perfection.

We listen to him; the sirens passing outside represent either some medical emergency or some death; while listening to the story of an old-boy love throttled I wonder why a hearse should hoot and speed down the empty streets of the quarantine days; will the dead body it ferries escape and re-run the life it suffered? We listen to the monotone of Poet. Sirens do not add or subtract any note from his soapy opera.

The poetry scene Poet fell in, sprawled like a killing field of love; the spirits rotted, being discarded and shovelled into a shallow grave; people still pursued love; the messages and texts sent or received might have reminded you of Ouija, talking boards, communication beyond life.

Poet, in order to calm down himself, made himself believe all was one, and everyone was everyone else, and all amounted to nothing; for one moment his heartbeats blinked and collated a Zen spread sheet, and then he lost his composure again.

Lately, he had been dwelling on the house of his broken dreams, and since he met the woman we call Green he had weaponized analysis of his so-called relationship with Red. His heart incorporated his own deductions in the narrative it perceived. In a way, he sat on a chair and lifted it too.

His heart acted and indulged in inaction at the same time. He came out of love for Red, shivering, skinless, and with his nerves raw and open, but he did not fall in love with Green. He still wrote poems, but he did not save those for any future manuscript. He took a pilgrimage to the hills Tagore often visited and wrote some of his poignant works but chugged rum in his economy-class hotel room with one rectangular window overlooking the opaque continuum of the heavy rainfall because Poet visited the mountain during ‘off-season. Poet imagined clotting his relationship with his father and dialled his father from a phone number the old man could not have in his contacts.

Hello would trail the silence, and silence would chase the shot of Hello. Rain followed Poet back to his city, his once beloved and now abhorred city, and he felt being nomadic. He had no home at his house and no energy to navigate the world unseen in search of new friends, friendly new romance, or a memorable piece of literature.

The state of fugue seeded camaraderie with someone he chanced upon during a visit to the courthouse where Poet stood as a witness to a fellow writer who was accused of scrivening and publishing indecent materials. The lawyer on behalf of the complainant descended from one of those original founder families the city loved to hate, and after the hearing of the whinge, the lawyer extended his hand to Poet, said that he was Pandava, and although he represented the complainant he did not share the same credence. The lethargic vine of Poet’s being accepted Pandava’s truss. Soon Poet discovered Pandava’s rigid decadence inherited from his family. It was as old as the city and that much outdated. Most people of the city, bless their souls, did not share Pandava’s prejudices, greed, and politics. Still, what did Poet care; he listened without hearing; he talked without believing; he convinced Pandava about changes in his soul, and hid his indifference well.

Poet has always been a poet, not a moralist. He cherished his aberrations, savoured his imaginations regarding Pandava being punished for his dogmas and convictions. He murmured ‘yes’ to everything Pandava said while chuckling inside, fancying that the revolutionists hanging Pandava from lampposts. The creed and ideology of the ‘revisionists’ would be vague. Poet could never discern who his ‘people’ were.

By this time Poet began believing in the ephemerality of the relationships, even amity, the most of all – friendship. The ship was sailed; he stood alone in the dock and alone on the deck waving goodbye at each self, and at the helm and the stern – unaccompanied – gybing the vessel in the treacherous water. Hello, drowning, my old friend.

Near the northern end of their city, the two met, often in one minute cafe to sip bitterness liquefied, and nod at its rather a Spartan decor and its lime mortar grouting walls; every sip, like a foghorn, cleansed Poet’s black thoughts a bit, albeit the cloudless heart lasted no more than a few minutes; and for no reason Poet murmured, “The election may indicate the change, but its results will never change my heart.”

“I find no logic behind not supporting a progressive righteous government.” Pandava let the coffee sprawl all over his tongue and waited for the coating to work out its virulence and for the sweet tide of his saliva.

“It is the right choice.”

“Enough of the puns. I can be a friend of a person who has some particular political lenience, but I can never befriend his fascism.” Poet said, and although he was not drinking whisky, he felt the level of intoxication needed to speak freely.

Like an inebriated person, he uncorked his words with extreme caution inside and wildly outside. Did he realise he talked with himself and argued with the woman in Red? He is a poet. The more he talked more he lost his footing and reasoning. He doubted his phrases, his faith seemed faltering, and he panicked. On the other hand, several observations gained clarity in his mind. For example, Red behaved as if she was leftist in the company of the intellectuals, worked at a capitalist organization, was proud of his father’s liberal attitudes, and acted sarcastically about politics when she was with Poet alone. She echoed the sentiment of people at large. Poet could always tolerate people at large, but his failed romance could not find absolution for Red, and Pandava assembled Red in front of him on that serene autumn afternoon.

The lawyer accused him of being a hypocrite, and he received the adjective quietly, warped his neck to watch the road streamed by the café without any door, and his fingers drummed a passive-aggressive rhythm on the old wooden table. Someone curved a symbol of heart on the surface. Time obliterated the initials in its chambers.

Why, Poet asked himself, he felt empty when he needed words to bolster his opinions. Why did he picture unnecessary details of another time and someplace else when he needed to pay attention to now and here?

Granted, every row about politics seemed rehearsed, already heard, and argued by two sets of third parties. All stories, especially about love and creed, appeared as binary. The endings are either a Y or an N.

Poet heard his own bleary voice, “You see, P, everything is about the narrative. Your fascists want to write theirs, and in it they call the villain an anti-hero. We want ours’, mostly because we have seen a wrong story kills billions.”

He ordered another cup of coffee; dwelled on his affection for silence – the stillness of a moor ornamented by a thousand tiny dictions, and imagined every room, piazza, theatre, restaurant, café and soirees metamorphosing into a verdant glen as he entered; he told the lawyer that he abhorred silence, and that hush made him uneasy.

That very night, his muscles flowed like a mushy tributary. His hand streamed near his cell-phone, circled its blinking light and cascaded ahead from the edge of his bed. Moments later, it returned to the phone. He could see the messages, but he could not answer Red.

His thumb swiped up all the messages; it no longer understood the rite. He stumbled at a flurry of messages left by Green. Eventually he opened the second message as the first one always vomited excuses or greetings; Green had some trigger happy fingers.

Green sent one poem by a poet he did not know, but the poem won an obscure award nonetheless. ‘Recognise this?’ she wrote.

Poet did recognise the poem; Red sent it to him for editing; Poet said that it hardly needed any editing, and although his ego found several points for fine-tuning he praised Red for writing such an intriguing piece.

It took several hours before realising the truth. Poet opened his computer. By the wee hours of the dawn, he found nine other works of word by word plagiarism. He took his caffeine tepid. He was surprised that he was not surprised by Red’s crime or angered at being used as a tool to change the stolen works just enough before submitting to various magazines. He felt nothing; not even the fear of an innocent involved in an elaborate con. It was a full-stop, a mark of period. He typed to Green, ‘Do whatever you think right.’ He never followed the uproar in the social media.

Four months dissolved before Poet began to write again, but his pieces failed to pass the hurdle of publication. Two more months, and pandemic engulfed us; Poet appeared at our door seeking for a group therapy for his split-personalities.

View all posts by Kushal →
This entry was posted on 22 January, 2022 in homepage and tagged Kushal Poddar, nick victor. Bookmark the permalink.