With lyrics based on ‘Alice’s Adventures in Wonderland,’ it became a touchstone of psychedelic rock 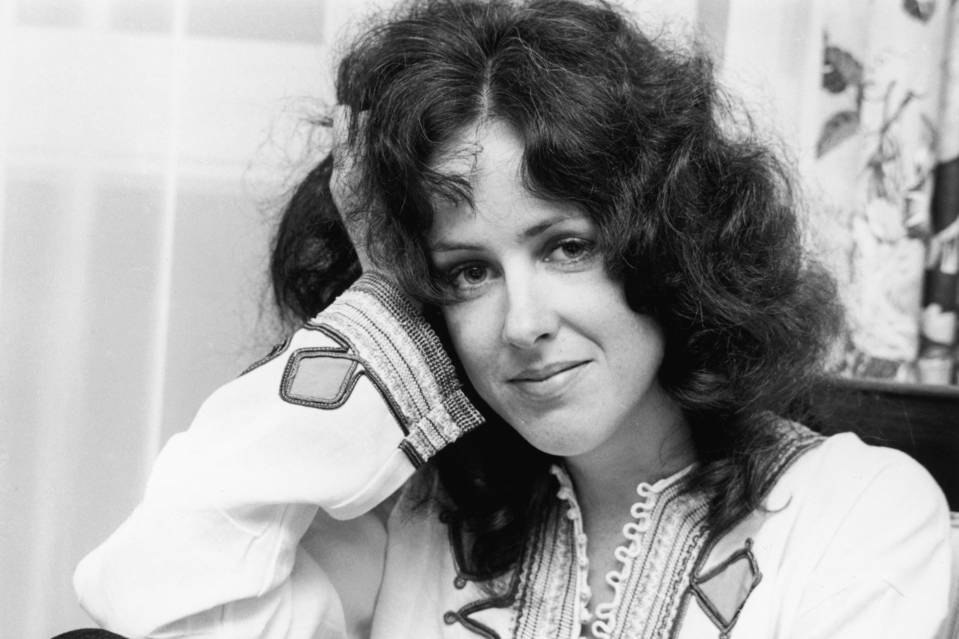 When Grace Slick wrote “White Rabbit” in late 1965, she never imagined the song would pave the way for psychedelic rock and inspire several generations of lead female rock singers, including Pink, who covers it in the new film “Alice Through the Looking Glass.”

Released originally by Jefferson Airplane in February 1967 on its “Surrealistic Pillow” album and then as a single that June, “White Rabbit” peaked at No. 8 on Billboard’s pop chart. The brooding bolero has been interpreted by dozens of rock and jazz artists and was inducted into the Grammy Hall of Fame in 1998.

Earlier this year, Ms. Slick, 76, spoke about the song she composed on a red piano, and her trippy lyrics based on “Alice’s Adventures in Wonderland.”

Edited from an interview:

Grace Slick: In the summer of 1965, I was living with my husband, Jerry Slick, in Larkspur, Calif., about a half-hour north of San Francisco. I was 25 and working as a couture model at I. Magnin in San Francisco while Jerry was making short films. We didn’t have much money.

At I. Magnin, I had to change into expensive clothes every 10 minutes and walk around as rich old ladies felt the fabric and asked what the dress cost. If a woman bought the dress, the store would make one up for her nine sizes larger than I was.

San Francisco was saturated with music then. Haight-Ashbury was a draw for kids, and bands were there from all over the country. In September ‘65, Jerry and I went to the Matrix to hear a new band—Jefferson Airplane. Signe Anderson was the Airplane’s lead singer, and as I watched, I decided that singing might be way more fun than modeling.

So we started a band. Jerry had a set of drums and his brother Darby knew how to play guitar. Our friend David Miner could sing and play guitar, Bard DuPont played bass and Peter van Gelder played sax and flute. We named the band the Great Society—sort of a snarky take on Lyndon Johnson’s social program.

That fall, I found a small upright piano for $80 at a warehouse in San Francisco. It was painted about 90 coats of bright red and was missing around 10 keys in the upper register. I didn’t play way up there anyway—the notes were too pingy—so I bought it. Jerry and I put the piano in our living room.

Our first gig was at North Beach’s Coffee Gallery in October ’65. I quit my modeling job and started writing music for the band. I didn’t really play piano—I’d write lyrics and bang around until I came up with chord progressions.

The more the band gigged, the more media coverage we got. In an interview with the San Francisco Chronicle, I argued in favor of marijuana and LSD, and somehow the article got back to my parents. It was painful for them, I’m sure, but I didn’t care whether they minded. Parents were criticizing a generation’s choices while sitting there with their glasses of scotch.

They also seemed unaware that many books they read to us as kids had drug use as a subtext. Peter Pan uses fairy dust and can fly, Dorothy and her friends in “The Wonderful Wizard of Oz” cut through a poppy field and wind up stoned and fast asleep.

I loved “Alice’s Adventures in Wonderland.” The stuff Alice drank and ate made her high [tall] or brought her down [small]. There were all kinds of drug metaphors in there. The ’60s were very much like that.

One afternoon in December or January, while Jerry was out, I started writing a song about Alice and all the drug-use metaphors in the story. I wrote the lyrics first. As I wrote, I’d read them out loud to be sure my voice could form a cadence [Ms. Slick sings slowly to illustrate: “One pill makes you larger / And one pill makes you small / And the ones that mother gives you / Don’t do anything at all”].

When the lyrics were done, I took the sheet of paper to the red piano and worked on the chords, writing the names of the ones I liked over the phrases. I wrote the song in F-sharp minor, a key that’s ideal for my voice. Minor chords have a certain darkness and sadness.

The music I came up with was based on a slow Spanish march or bolero that builds in intensity. I’ve always had a thing for Spanish folk music. Back in 1963, Jerry and I were living with Darby and his girlfriend in San Francisco on Potrero Hill. One day we took acid and I put on Miles Davis’s “Sketches of Spain.”

With the chorus—the Alice lines, like “Go ask Alice, when she’s 10 feet tall”—I shifted to major chords for a release and to celebrate Alice’s courage following the white rabbit down the hole. Once down there she didn’t have a Prince Charming. She had to save her own ass while going through all the insane hallucinogenic stuff.

I identified with Alice. I was a product of ’50s America in Palo Alto, Calif., where women were housewives with short hair and everything was highly regulated. I went from the planned, bland ’50s to the world of being in a rock band without looking back. It was my Alice moment, heading down the hole. “White Rabbit” seemed like an appropriate title.

When I finished the song, I made copies by hand of the lyrics and chord names for the band. I sat at the piano and sang and played the song for the guys. Then they followed on acoustic instruments, to keep the noise down.

We first performed “White Rabbit” in early ’66 at a dive bar on Broadway in San Francisco. Each night we’d play four 30-minute sets for a handful of drunk sailors at the bar, or our friends would drop by to listen.

We didn’t cover other bands’ stuff. That was a fast way to wind up playing at the Holiday Inn forever. The challenge was to write what you felt. At the dive bar, if the drunken sailors weren’t aware we were playing, our original songs were probably in pretty good shape.

Within a few months we went from dive bars to opening for the Grateful Dead, Quicksilver Messenger Service, Janis [Joplin] and other artists at local auditoriums and theaters. We performed “White Rabbit” at places like the Fillmore, Longshoremen’s Hall and the Matrix.

At one point, we made a series of demos at Golden State Recorders for Autumn Records. [Label co-owner] Tom Donahue had Sly Stone come in to help us. We were so bad that Sly eventually played all the instruments so the demo would sound OK. 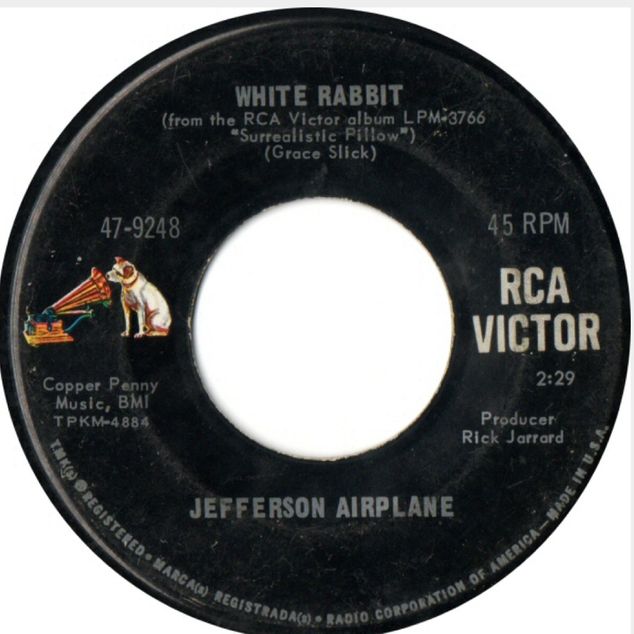 By the summer of ’66, some of the guys were talking about leaving the Great Society to study the sitar in India. I figured the band’s days were numbered. In October, Jack Casady, the Airplane’s bassist, came up to me at the Carousel Ballroom, where we had opened for the band. Jack said Signe was leaving to raise her baby daughter and asked if I wanted to replace her.

Initially I was shocked but it took me about two seconds to say yes. Down the rabbit hole, again. Jack, Marty Balin, Paul Kantner, Jorma Kaukonen and Spencer Dryden were way ahead of the Great Society in terms of musicianship. Jerry was in film school by then, so he didn’t mind.

When I joined the Airplane in October ’66, I brought over “Somebody to Love,” which Darby had written, and “White Rabbit.” Audiences liked the songs when the Great Society had performed them. They were a good fit for Airplane.

On “White Rabbit,” the Airplane was better at designing an instrumental idea. There was never a specific guitar solo for “White Rabbit.” In concert, there might be a jam in the beginning but my vocal always ran about 2½ minutes.

People in the audience thought I moved around on stage like a panther. I’m actually a klutz. The reason I moved so carefully was to avoid tripping and breaking my neck.

In November ’66, we recorded “Surrealistic Pillow” at RCA in Los Angeles. After we recorded “White Rabbit,” we all went into the control room to hear the playback on the monitor speakers. I was blown away. I wasn’t aware I sounded like that, with all that power. I was impressed.

I always felt like a good-looking schoolteacher singing “White Rabbit.” I sang the words slowly and precisely, so the people who needed to hear them wouldn’t miss the point. But they did.

To this day, I don’t think most people realize the song was aimed at parents who drank and told their kids not to do drugs. I felt they were full of crap, but to write a good song, you need a few more words than that.

After the “White Rabbit” single came out, RCA told us each week where the record stood on the charts. I didn’t pay much attention. I didn’t set out to write a hit single and I felt that radio only liked “White Rabbit” because it was short and they could get more ads in.

Looking back, I think “White Rabbit” is a very good song. I’m not a genius but I don’t suck. My only complaint is that the lyrics could have been stronger. If I had done it right, more people would have been annoyed.