How Salvador Dali Melted My Time 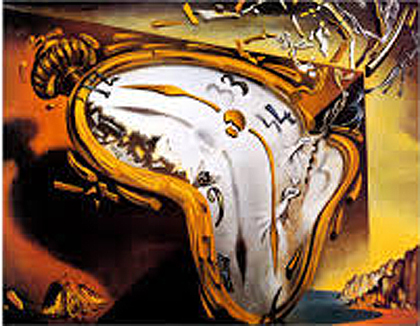 The Argentinian pop artist Marta Minujin moved to New York when she was twenty years old.  One day she was roller skating down the sidewalk on Fifth Avenue, and she passed the St. Regis Hotel just as one of its occupants, Salvador Dali, stepped out.

“Hola!” he cried as she streaked by.  Hearing her native tongue, Marta stopped, and they became friends on the spot.  She saw him frequently, and one day in 1974 she invited me to tag along to meet him.

Marta is famous in South America for her massive projects.  At the pinnacle of the military junta’s tyranny in Argentina, for example, Marta persuaded the country’s largest baker to give her 50,000 loaves of pan dulce–sweet bread–which she tied, loaf by loaf, to a steel frame, donated by an iron works.  The frame was a copy of the famous Obelisk in Buenos Aire’s central square, and built right next to it.  She called it the Edible Obelisk, and she invited the citizens of city to come and devour it, which they did.

I was staying at the time with Claudio Badal.  Claudio was Chilean bohemian, a witty, mercurial, natural aristocrat who spoke four languages fluently and lived rent free in a workroom over a girdle shop on 14th Street at Union Square.  He was one of the principal organizers of the Central Park Peace Rallies and Be-Ins that shook New York in the sixties, which made him a familiar in every quarter of the city.  And when Salvador Allende was assassinated by a military junta sponsored by the CIA, it was Claudio who organized the defiant tribute to him held in Madison Square Garden. He was an old friend of Marta’s as well.

Claudio taught me how to live without money.  His rent was paid by a friend who used the room to paint cheap frames for department store displays, which meant that Claudio had to leave it on weekdays from 10 to 5.   He had a bunk bed, an electric tea pot, a couple of cups and chairs, and a sink.  The toilet was down the hall.  He’d lived in the building for ten years when I met him.  One of his neighbors was the actor/writer Taylor Mead.

Claudio’s only other possessions were some books and a stack of old National Geographics that he’d picked up off the street.  I leafed through one of the magazines that morning while Claudio made tea.  I paused to study a striking color photo of a young Yugoslavian woman in native dress, holding a bushel basket of freshly picked oranges which she pointed toward the camera.  Something made me glance at the cover to check the date:  October 1958, fourteen years previous.

We spent the day in Central Park.  At Bethesda Fountain, Claudio bought a dollar joint from a street dealer, which struck me as a dubious thing to do.  But it smelled great when he lit it.

“It’s good, isn’t it?” he said matter-of-factly, as though it were a new cheese from the deli.  We were walking south along the grand allee in the center of the park.  I asked him how he ate in New York.   “I go to Max’s Kansas City at happy hour and eat the chicken wings,” he replied.

At the far end of the allee, a half a mile away, we could see a man walking on ten-foot stilts.  He’d drawn a circle of spectators around him.  As we drew near, Claudio ventured that it might be Peter Schumann, the founder of the Bread and Puppet Theatre.  Claudio had worked with him when he began the company in Coney Island, and I had just worked with his draft-resisters’ branch in Paris.

“Hi, Claudio!” Schumann called from the top of his stilts, some sixteen feet high.

“Hi Peter,” he replied and, indicating me, said, “This is Richard.  He just came back from Paris.  He worked with your group at L’Epee du Bois.”

“No fooling,” Schumann said.  “Good show.”   He gave me as much of a wave as he could, while balancing on his stilts.  It was an awkward angle for a conversation, though.

“Bye, Claudio,” he said, as he turned and walked away with giant strides through the trees.

“Weren’t you close friends at one time?” I asked, as we continued our walk.

I met Marta at the St. Regis at 6 PM, and we went to the cocktail lounge to ask for Dali’s table.  We were taken to a small, round, marble table in the corner, where two young men in blue jeans were already waiting.  They were both artists–one a conceptual artist, the other a painter–and both from Pittsburgh.  They explained that they had started calling Dali on the phone some six months before, and after five months of it he relented and granted them an audience.  Each of them had a green plastic garbage bag on the floor by his chair.

Dali came down after a while, gave Marta a grand embrace and double kiss, and sat down next to her.  He was elegantly dressed in gabardine pants, a burgundy smoking jacket, a ruffled shirt and silk kerchief.  His famous moustache was waxed to the nines, and he had so much make-up on that it was hard to discern his skin.  Marta introduced me as her friend, and he offered me a limp hand with a distracted air.  Then he turned to the boys from Pittsburgh and asked them who they were.

They introduced themselves and reminded him that he had told them to come that evening.  Dali responded with a marked change in tone.

“Why wouldn’t you stop pestering me on the phone?” he demanded.  He turned to Marta.  “For six months they called me, night and day, on the telephone!”

“You could leave me alone if you want to know what else to do!” Dali interrupted imperiously.

“We just wanted to show you our work,” the other one said, pulling his garbage bag off the floor and into his lap.  He pulled a large black artist’s notebook from the bag, about 14 x 20 inches with perhaps a hundred pages, and placed it on the table in front of Dali, who looked upon it as if it were infected.  He leafed through a half dozen pages.  From where I sat they looked pretty good; neatly rendered pencil thoughts and drawings, in the tradition of Leonardo; the current rage in conceptual art.  Dali handed the notebook back.

“You know the garbage strike is over now,” he said.  “You can put this out on the sidewalk and they’ll take it away for you.”

The poor man smiled uncomprehendingly at first, then flushed beet red, cast down his head, and fought back tears.  Dali threw his head back, widened his eyes, and turned to glare at the painter, who lifted his own garbage bag on the unspoken command.  He pulled out a single framed oil painting, and held it on the table to present to Dali.  It was an excellently rendered, hyper-realistic image, about 20 x 24 inches, of a smiling, attractive young woman in native Eastern European dress, holding a bushel basket of oranges which she pointed outwards toward the viewer.  The oranges were exploding from the basket, propelled by an unseen force.

It was the same picture that I had studied that morning at Claudio Badal’s, exact in every detail, except the oranges were launching toward the viewer from the basket.

“Hey, I know that picture!” I blurted out, incredulously.  “It was part of a National Geographic article on Yugoslavia from 1958.  I just looked at it this morning!”

The man’s face fell, along with all his hopes, at this revelation.

Dali looked on in haughty, vindicated triumph, as if the exposure was a routine matter.  Silence descended on the table.  After a minute the painter put the painting in the bag and placed it on the floor.  Then Dali turned to Marta and talked to her in Spanish for some time, while the rest of us sat mute.  Their conversation was eventually interrupted by the arrival of Gala, Dali’s wife, who squeezed into a sixth chair around a table made for two.  Like Dali, she was old, well dressed, and wore so much make-up that it gave her face a lurid countenance.  He proudly introduced her to Marta, whom he described in English as “the most intelligent woman in South America.”  Then he broke into Spanish again to ask Marta a question, evidently about me, because he then said, “And this is the artist Richard Squires, her good friend and collaborator.”  I shook Gala’s hand as she minced a grimacing smile toward me.  Then Dali sat in silence for a moment.

“And these are a couple of flies,” he said, with a wave of the back of his hand toward the two men from Pittsburgh.

I once ran into an acquaintance from Virginia around midnight in Washington Square.  She was on her way home to her flat near the Cloisters; I was heading to my place in the Village.  The next morning, at the corner of Broadway and Canal, I met her again as she emerged from the subway.  Although extraordinary, that event obviously falls in the realm of random coincidence; delightful, mysterious, but not really meaningful, aside from the magic of long odds in numbers.

But the Yugoslavian orange picker strikes me as something more than coincidence.  A lot was riding on which of the magazines I picked up from the pile on Claudio’s floor that morning.  And a lot was riding on whether I read the story on Yugoslavia in the magazine that I picked.  How many fourteen-year-old copies of the National Geographic were even in existence on 14th Street, or in Manhattan, or in New York City that day; and how many people besides me actually saw that picture?  I think I must have been the only one.  If you plot its probability, it veers sharply toward infinity.

There’s a Sufi aphorism of The Tapestry that helps me understand it.  Men are like individual threads in an enormous tapestry.  They are normally focused on their private, filamental lives, oblivious to all but the threads they happen to directly cross.  But on rare occasions they can see the larger pattern.  Such epiphanies tend to occur in times of idleness and leisure, when attention is diverted from its normal fixation on habitual concerns.  It’s possible then to take such an interest in a photo of a maiden that you check the cover of the magazine for a date.  You may not know it, but you’ve glimpsed the tapestry.  The shuttle disappears, the completed work emerges, and the correlation of a magazine photo in a workroom and a painting in a cocktail lounge cries out for attention.  You’re released for a moment from the loom of time, where life unveils itself in sequence.  You experience simultaneity.

I had no desire to play the damning voice of truth for an irritated master like Salvador Dali.  Even copied for the most part from a magazine, and closer to Magritte than Dali, it was quite a good painting.  But the man defied a universal standard of behavior to gain his audience, and saddled himself with a karmic burden for doing so.  Maybe it’s possible that Dali–great-souled genius that he was–had reached a level of realization from which such karmic debts got paid when rendered.  Even if it meant that someone whom he didn’t know would need to see a certain picture in a certain magazine on a specific day, in a room above a girdle shop on the other side of town.