If you don’t stop to think, it’s easy to label Mark Dunford’s paintings as realist depictions of landscapes and still lives. But if you slow down and look properly you will realise that they are not realistic at all. They do engage with how things look, or are perceived, but they are as much about the act of seeing and re-presenting as what is or may be out there.

The paintings evidence their construction: there are pencil grids and crosses, measured intervals and spaces, overpainting, simplification, angles and approximations. How does the light fall on this hill, how does the shadow or difference in tones create a line or shimmer over there, how to deal with the difference between daylight and dusk on the subject being studied?

This, of course, makes the work sound academic and dry, which it isn’t. Dunford’s paintings are vibrant and colourful, but they are as much about colour, form and light as the hills or flowers, trees or fields, fruit and flowers which are the ostensible ‘subject’ of the work. Dunford has considered when to simplify (areas of flat colour), when to accentuate the construction of the work, when and where to use a certain colour as light and colour change minute by minute.

Dunford takes many months, sometimes years, to paint each of his works. The book makes clear that each flower in a certain picture is a composite from several flowers over the time it takes for Dunford to capture the essence of it. In a similar way clouds or wooded areas, the water in the creek, the gardens and distant fields are configured in a certain way for maximum effect, recognition and engagement. Dr. Elizabeth Reissner suggests in her essay that ‘Dunford’s paintings are embodied responses to the world’ and that they are as much about being in the world as what the world looks like.

That is, they are far more than a reproduction or description of what is depicted. They are about the act of looking, the way light illuminates and changes, how clouds and water move, the contrast of near and far, what we can see or imagine we see, what we choose to focus on (how we ‘look’), how we feel about what we see, and about the transformation of all that into a two-dimensional approximation, selection or version.

Dunford knows in the end his work is pigment and oil placed on board or canvas, is only one interpretation of the world, a personal and tentative one. This allows him to continue making new versions, to keep looking and painting. The creek in the village he lives in, with its fields and woods beyond, its gardens, washing lines and ancient buildings, is one ongoing subject; flowers and fruit are another. Like all good artists Dunford is inquisitive and interested in the world around him, wants to understand the form and nature of what he sees and where he lives, and uses everything he can to make work that evidences his thinking and wonder. 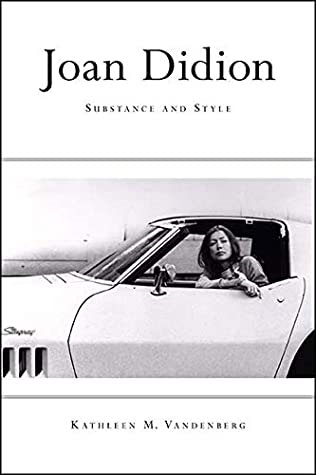 One of the intriguing things about critiquing writing rather painting is that what is discussed is often a by-product of the writing, is not what is planned (let alone named) by the writer. It is something critics, readers and academics bring to the work once it has been published, to try and understand it. Whether they write novels, poetry, non-fiction of something else, authors are unlikely to decide that now is the time to use anaphora, asyndeton, anadiplosis, apposition or any of the other terms that Kathleen M. Vandenberg names in her study of Joan Didion’s work.

Much of what Vandenberg has to say about Didion’s writing and use of language – often discussing the use of rhetoric – is interesting and useful, but the endless dropping-in of technical terms (and, no, I don’t know what many of them mean either) does not add anything to the general discussion, which is best summed-up in the ‘Conclusion’:

Beginning with her time at Vogue where ‘in an eight-line caption everything had to work, every word, every comma’, she [Joan Didion] evolved into a writer keenly aware of how she composes sentences, revising them constantly, retyping her own sentences, finding and refining her rhythm, working with the way ideas and words echo across a text.

It’s clear that Vandenberg understands Didion’s writing in musical terms, and indeed much of the book plays with ideas of phrases echoing within a text, how sentences and ideas ebb and flow, speed up then slow down, reiterate and emphasize, catch the reader up in their swell. The technical terms feel like an addition here (inserted I suspect for a PhD submission) rather than being a natural part of the book.

If you can bear to either stop and look up lots of long words or skip over them, like I did, there is a fascinating study of Didion’s writing here, especially useful and welcome because it focusses on the text and not Didion as author or biographical subject. What is the language doing? How does it work? How does it coerce, persuade and engage us as we read it? And to what end? Colum McCann uses language in his new book, Apeirogon, to explore how war works, specifically in relation to Israel and Palestine, occupation, terrorism, resistance, fighting and detainment. He does so by telling a story built of facts, allusions, fictions and asides, in numbered sections, which rise then fall from 500, the central section and story of the book. Rami and Bassam are the recurring constants, two fathers whose daughters have been killed by ‘the other side’, both choosing to try and free themselves and others from the traps of political spin, war and death.

McCann stays away from authorial intervention, preferring to offer real-life events and incidents alongside the day-to-day lives of his characters, leaving the reader to engage with the story on the level they wish, to interpret the tesserae of images, quotes, reports, asides, facts and fictions as they see fit. By making the conflict –  which we often perceive as abstract, political and a given – personal and individual, by zooming in to a human level, McCann makes us think again about people.

Here there are no goodies and baddies, let alone easy answers. Here are individuals and families being evicted, starved, beaten, shot at, killed, tortured and abused. Here are individuals and families eating together, praying, shopping, talking and dying. Here are people who are mostly powerless, trying to survive in a situation they did not choose or cause.  Here are characters who choose to resist and try to change things, not through armed resistance or politics but simply by telling their stories to each other and anyone who will listen.

McCann offers no answers, and he has not changed my mind about illegal military and political occupations and invasive regimes, or how religion and power corrupts, or the basic fact that violence doesn’t solve anything. What he does do is show the reality of living in certain situations and how grief, violence, poverty and imprisonment leave their marks on people; and – more importantly – how personal actions and individual stories can and might change things for the better.

View all posts by Rupert →
This entry was posted on 22 May, 2021 in homepage and tagged Apeirogon, Colum McCann, Into the Light, Joan Didion: Substance and Style, Kathleen M. Vandenberg, Mark Dunford, Rupert Loydell. Bookmark the permalink.

One Response to How Things Work: Painting, Writing, War