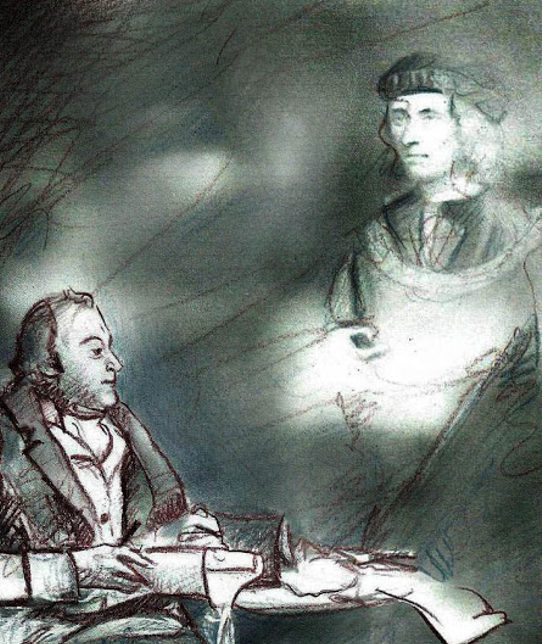 “My business is not to gather gold, but to make glorious shapes
expressing god-like sentiments.”
William Blake

Blake would often receive visitors in the nude
Declaring that God Almighty was his tailor;
That he and his wife Catherine were Adam and Eve
And that clothes were a sign of man’s failure.

Timbs was keen to unearth examples of “eccentrics”,
Those he called “the motley-minded and the grotesque”,
And, determining that Blake fell into that category,
He wished to use Blake to feather his own nest.

Having prevailed upon William Blake’s good nature
And gained admittance to Blake’s inner sanctum,
He asked Blake if it was true he saw the souls of the dead
And that he claimed to hear angels singing anthems?

At Fountain Court, Strand (Blake’s lodgings), Blake replied
“The spirits of the long departed mingle here with one another:
“Moses, and Pindar; Virgil, and Dante; Milton and Homer.
“I once even had the devil and his mother.”

“Do these persons have themselves announced?”
Enquired Timbs or “first send in their cards?
“They come entreating me to produce their portraits,” said Blake,
“And I happily satisfy the vanity of the bards.”

But suspecting Timbs to be hiding a cynical sneer
Blake decided to take him for a ride:
He told him not to sit where he’d just planted himself
And said sharply, “That’s where the ghost of my pet flea resides.”

Then Timbs was made to feel even more uneasy
As Blake moved him around the room,
“No, no. That’s no good. That chair’s for Richard III.
“He’s to sit there today, should he be coming to town.”

“Richard III?” gasps Timbs, sensing a profitable scoop
And now feigning belief in Blake’s inner world.
“How remarkable! Of course I know you have the power
“To see visions of both the living and the dead!”

“Richard III?” Timbs repeats, “tell me now where do you see him?”
Blake answers, “Quiet. It’s his first visit.”
“But where is he exactly? How do you know his name?”
Blake replies firmly, “My spirit…”

“…My spirit recognizes him, but I can’t tell you how.”
“He’s opposite to you, on the other side of the table.”
“What is he like?” insists Timbs, overcome with curiosity.
“Stern, but handsome: at present I see only his profile.”

Then Blake narrows his gaze as if to adjust his focus,
“Ah, now I have the three-quarter face.
“Ah! now he turns to me. He is terrible to behold
“But he’s more than welcome in my place.”

“Could you pose him any questions?” says Timbs, beside himself.
“Certainly,” says Blake, “What would you like me to ask him?”
“The murders!” blurts out Timbs, “the murders!
“The murders he committed during his lifetime!”

“Your question is already known to him,” Blake shrugs,
“He and I converse mind to mind.
“We speak by intuition and by magnetism, you understand.
“Richard and I have no need of words.”

“What is his Majesty’s reply?” beseeches Timbs,
“This…” Blake cups his ear as if striving to listen,
“Only it is somewhat longer than he just gave it to me,
“For you would not understand the language of spirits.”

“He says what you call murder and carnage is all nothing!
“That in slaughtering fifteen or twenty thousand men you do no wrong!
“For what is immortal of them is not only preserved,
“But it passes, you understand, into a better world.”

Timbs’ jaw drops, appalled, and he edges away from Blake
As if regarding him as a monster, while Blake continues,
“And the man who reproaches his assassin is guilty of ingratitude,
“For by this means he enters into a more perfect state of existence.”

“But do not interrupt me; he is now in a good position,
“And if you say anything more, he will go.”
Blake then laid out his pencils and brushes and began
To draw a portrait of Richard from head to toe.

But Timbs is unable to believe what Blake has been saying –
It’s as if the saintly artist has turned into Charles Manson –
Aghast at Blake’s replies he beats a hasty retreat
And later spreads the rumour that Blake was taking opium.

But Blake had effectively got rid of his vampire visitor
And was never to be troubled by Timbs again –
The kind of person that Burroughs warned against:
Someone more of a succubus than a man.

“If, after spending time with a person,”
William Burroughs used to say,
“You feel as though you’ve lost a quart of plasma,
“Avoid that person; otherwise pray.”

In 1865 John Timbs published his ‘Modern Eccentrics’
In which he included William Blake;
Spitefully charging him with an hallucinating insanity…
England’s uncrowned King and God’s rake.