Posted on 1 February, 2020 by Rupert Loydell 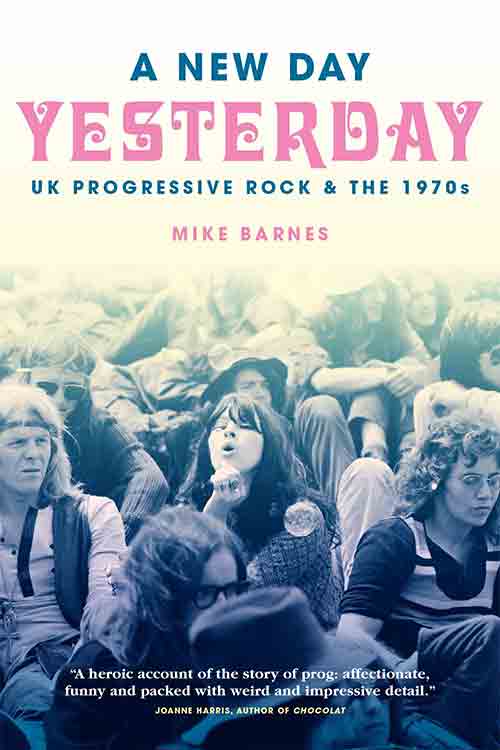 At over 600 pages this feels and reads like an encyclopedia. Mike Barnes has consistently championed progrock, contrary to the whims and abuse of fashion, and he wrote a great book about Captain Beefheart, so I was looking forward to reading this. But, you know what? It’s extremely dull, and needed a good editor (as well as a proofreader – I haven’t seen so many sentences without closing punctuation or random application of double and single quote marks for a long time).

The main problem is that Barnes has no argument to make, no particular axe to grind, and nothing new to say. Anybody who is interested in any of the bands he focusses on will already know what’s regurgitated here, and most of the featured bands are the obvious ones: Yes, Genesis, Hawkwind, Van de Graaf Generator, King Crimson, The Moody Blues, Gong, Camel, Soft Machine and Greenslade are all here, along with the dreadful ELP and – for some reason – Jethro Tull, who I’ve never ever come across considered as remotely progrock!

What is on offer here is the obvious stuff that’s been told time and time again, and there is precious little about the bands I don’t like (ELP, Curved Air, Gentle Giant, Jethro Tull) to make me change my mind. Barnes doesn’t critique the music, and doesn’t make a case for or against progrock: it’s simply there. There are a few digressionary chapters about topics such as fashion, journalism and festivals, but they are clunky and feel like add-ons. The chapter about sex and attitudes towards it is embarrassing in the extreme and feels complicit in the sexism he discusses.

Barnes’ book starts to become almost interesting in the final chapter, where he argues that bands such as Magazine and This Heat were where prog re-emerged after the brief interlude that was punk (a thesis I’d concur with), but the chapter is a vague conclusion, the comment another aside, and it’s all after the 1970s anyway, so he doesn’t follow through. Instead he woffles on for a few pages about The Enid, one of the most awful bands I have ever had the misfortune to hear, before the book fizzles out with a quote from Tolkien, who until then he’s been at pains to dissociate from progrock.

I’m really not sure what this book is doing or who it’s for. It’s a fairly comprehensive survey of the bigger progrock bands but that’s all; and for me that’s not enough. It doesn’t offer the reader any minor or obscure progrock bands to investigate, it doesn’t explore links to other music such as jazz-rock, krautrock or classical in any depth, it doesn’t offer a critical context or even a personal opinion, and it doesn’t suggest how prog mutated or informed more recent music. It’s not even a joyous celebration, it’s just turgid and long-winded. If it was an album it would be a quadruple live album of drawn-out versions of the band’s favourite songs, complete with loads of overlong guitar solos and a drum solo hidden away on side 6. And no-one needs that.

If you are interested in progrock, I’d refer you to two previous books: Edward Macan’s Rocking the Classics. English Progressive Rock and the Counterculture (OUP, 1997) and Bill Martin’s Listening to the Future. The time of progressive rock 1968-78 (Open Court, 1998), which are both informative and enjoyable reads.

View all posts by Rupert →
This entry was posted on 1 February, 2020 in homepage and tagged A New Day Yesterday: UK Progressive Rock & the 1970s, Mike Barnes, Rupert Loydell. Bookmark the permalink.