I Want to See the Bright Lights 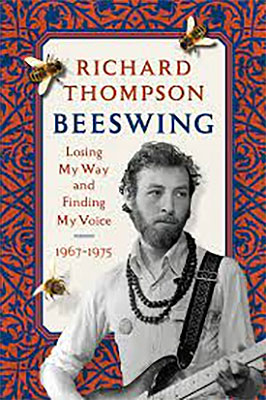 Richard Thompson has had an exciting life: critical acclaim for many of his solo, band and duo albums, a motorway crash that killed his girlfriend and other members of his band, helping give birth to folk-rock, an early English musician convert to Islam, living out the disintegration of his first marriage on album and stage. But you wouldn’t really know it from this cool, distanced and uninvolved autobiography which focuses on a specific eight years of his career, with some additional reminiscences about growing up.

I’m not one for gossip and sordid details of what did or didn’t happen, but this book is so self-restrained it’s hardly there. Thompson’s idea of intimacy or creativity extends only as far as thinking something really affected him is that he dreamt about it, and the ill-advised inclusion of retellings of those dreams in an appendix. Another appendix includes the full lyrics of a few tracks which are touched upon in some detail in the main text.

So the bare bones of Thompson’s story are here, his family background, how he met the friends and musicians he would form Fairport Convention with, dry documentary reportage of how and when albums were made, a generalised report of life on the road, and a cool and uninvolved (and uninvolving) account of why Sufi-ism seemed the right path, and his relationship with Linda Peters, who became Linda Thompson, his musical and personal partner.

There are some entertaining moments, but most of these are already established stories in the rock pantheon. Fairport ‘getting it together’ in the country, variations on how they moved towards hybridising folk songs and rock, and a lorry driving through the front wall of the Angel pub the band and family all lived in together. Thompson mocks himself for being a grammar school boy, but it has to be said (and I came out of the grammar school system too) the whole book comes across as a bunch of earnest and dull well-educated young people who never really argue or have musical disagreements.

Whilst a musician’s biography is always an adjunct to the music itself, it can of course stretch toward discussions of motivation, influence and creativity. Although Thompson namechecks a few musical influences and who he saw in concert, there’s little sense of struggle, celebration or exploration here. Only despair and grief are touched upon, when a van veers off the motorway, killing and injuring member of the band, precipitating changes in personnel and musical direction.

Thompson mentions the notion of being honest and finding a way to inhabit his previous songs if he is going to continue to sing them, going so far as to say ‘music without emotions is a heinous crime’, an idea that if related to ideas of confession or truth I’d heartily disagree with. But it’s strange to say that and then remove oneself from one’s own autobiography. Reworking traditional folk songs and playing covers of often obscure contemporary songs may allow for a distanced approach, but much of the music produced by Richard & Linda Thompson, especially the live versions recorded as they were breaking up, is gut-wrenchingly emotional and raw. Some kind of commentary would have been interesting.

But perhaps what I wanted was a critical book about Thompson’s music? I’ve never been much of a Fairport fan, but his duet and solo recordings contain some astonishing guitar work and songwriting, so I’m disappointed that the story in this book pretty much stops just as Thompson’s career gets interesting. Thompson doesn’t really explain how he found his voice, his writing methods, what he thinks about music, fame or his place in the world; in fact the book is sadly a bit of a non-event.

View all posts by Rupert →
This entry was posted on 10 April, 2021 in homepage and tagged Beeswing: Fairport, Folk Rock and Finding My Voice 1967-75, Richard Thompson, Rupert Loydell. Bookmark the permalink.