I WAS ELTON JOHN’S PIANO-POLISHER 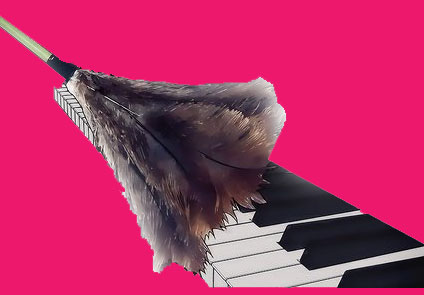 before streaming, people had
upright pianos in their front room, no-one
has space for a front room piano any more
except Elton John, he has a big white room
just devoted to that one white grand piano,
overlooking the lawn where his peacocks strut,
and there was a time, I’m now free to confide,
when I was paid to clean and polish that piano,
it constituted my fulltime employment role
and I took my duties as Elton John’s
piano-polisher very seriously indeed,
I would clean the white keys one day
then the black keys on alternate days,
stooping low to polish each claw-leg in turn
allowing no speck of dust to sully the high-gloss
sheen of that immaculate well-tuned Steinway,
I was proud to be the Rocket Man’s piano-polisher
proud to play such a very small part in Elton’s career,
but, I hear you ask, why did the sun have to come down
on such fulfilling employment? come close, I’ll tell you,
it wasn’t the polishing I objected to, it wasn’t the
white keys or the black keys, no, it was having to
wear the French Maid’s outfit while wielding the
feather-duster when I was polishing that finally brought
my career as Elton John’s piano-polisher to a close…

View all posts by Andrew →
This entry was posted on 28 August, 2021 in homepage and tagged Andrew Darlington. Bookmark the permalink.