If I Can Dream: Elvis In Concert 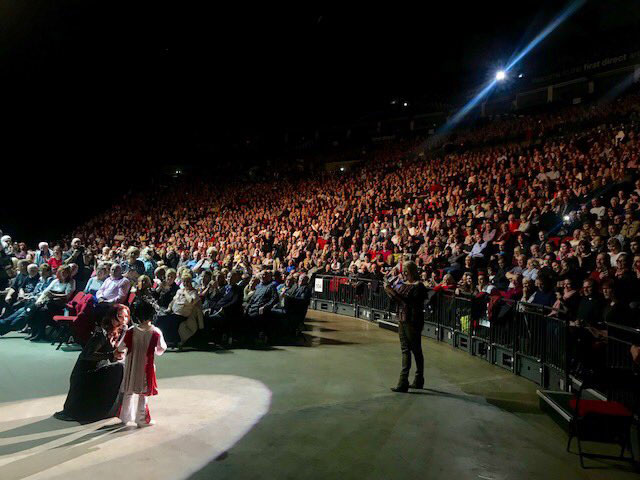 at ‘The First Direct Arena’, Leeds

Priscilla confides how she first heard Mickey Newbury’s acoustic “American Trilogy” on her car radio, and knew it was right for Elvis. But he always chooses his own material, and resents interference, how to bring it to his attention? So she buys a 45rpm copy, and allows him to ‘discover’ it himself. He plays it seven times straight, memorising it. I immediately resent the bombastic overblown arrangement he subsequently dumps on the single that climbs to a UK no.8, 7 July 1972. But watching Elvis do it now, on the big screen above the busy Royal Philharmonic Concert Orchestra, I reconsider. Clumsy, unsubtle, but the one-time Memphis Flash sweats a near-autobiographical slant onto its down-home Dixie themes. A glimpse of what’s within his psyche. And when he gets to that ‘all my trials, Lord, soon be over’… well, it resonates.

There are a million impersonators leeching comfortably off the Presley legacy, enough slicked-back quiffs and bejewelled jumpsuits to form their own autonomous republic. By contrast, this is no facsimile. This spectacle is as close as we’re gonna get, forty years down from that terminal Graceland bathroom incident. ‘No Elvis, Beatles or the Rolling Stones in 1977’ gloat the Clash. ‘I don’t think so’ retorts Priscilla. Souvenir programmes cost £15. One woman has Elvis tattoos all down her arm. Another wears a ‘Mrs Elvis Presley’ T-shirt. I wear the Sun Records top I bought in Memphis.

Elvis is dead. He’s not secretly living under an assumed identity in Brazil. He doesn’t work down your local chip shop. He wasn’t abducted by Area 52 Space Aliens. He’s deceased. I know for sure. I visited his grave at Graceland. And yes, I confess, it choked me up.

Elvis once gave ‘thanks to my friend Little Richard. I’ve never met him. But he’s my friend.’ When an interviewer had the temerity to call him ‘King Of Rock ‘n’ Roll’ Elvis points to Fats Domino instead, and says ‘no, he’s the King Of Rock ‘n’ Roll.’ He never gave a one-to-one in-depth interview. But at a Press Conference he was asked ‘is it true that you’re just a country boy at heart?’ He says, ‘well, I’ve got this belt,’ standing up to reveal a wide gold precious-stone-encrusted belt, with bling enough for an entire Rap crew. Which is no answer, but all the answer you need. If a simple country boy won the lottery, he’d buy pink Cadillac’s, a house for his Mom, and a belt exactly like that one.

Yet he was blessed – and damned, by enough charisma to shift planets from their orbit, a more potent superpower than the entire Marvel pantheon. Tonight, when he sings “A Big Hunk Of Love”, he gets to the line ‘you’re a natural-born beehive, filled with honey to the top’ and gives an amused shrug that says ‘who the hell wrote this dumb stuff anyway?’ When he does “Are You Lonesome Tonight” in a clip from his Las Vegas residency (‘Baccarat Around The Clock’), he adds the ‘do you gaze at your bald head, and wish you had hair’ line. He goofs with “Don’t Be Cruel” and fluffs the words to “Hound Dog”. When he does a “Suspicious Minds” that brings the stadium to its feet, he throws in a ‘I’ll dry the sweat from your eyes’. He does not treat these songs as sacred texts.

A muted trombone plays intro to the finger-popping “Fever”, originally from his 1960 ‘Elvis Is Back’ first post-Army album, part of a purposeful push to broaden and deepen scope, shifting demographics upwards. Remixed as a duet with Michael Bublé on the first of three Royal Philharmonic Orchestra CDs in 2015, here it strips back to just Elvis as he lip-smacks a big wet exaggerated kiss to ‘thou giveth fever, when we kisseth…’ Twin flutes play into “Can’t Help Falling In Love” from the 1973 ‘Aloha From Hawaii’ concert. It subsequently charts for UB40, the Stylistics and Andy Williams, but Elvis does the one you remember. Then Leiber & Stoller’s smouldering “Don’t” – burning with frustrated sexuality in an arrangement also from the 2016 ‘The Wonder Of You’ RPO collaboration. As Priscilla tells it, it reveals remarkable maturity for the twenty-one-year-old Elvis. Then, from the third revisioning CD – 2017, strings and chorus shimmer around “Blue Christmas” illustrated by home-movie footage of Daddy Vernon as Santa, Lisa Marie and a ten-foot snowman on the Graceland lawn.

By contrast, “In The Ghetto” – written by Mac Davis, comes illuminated by a run of sepia childhood photos, and narrates how generational deprivation is a perpetuating social trap. If his later politics tend towards the dubious – photographed with a smiling Nixon, well, wasn’t the Elvis story living vindication of the American Dream, dirt-poor white-trash poverty to unimaginable overnight wealth? When “Trouble” from the 1968 TV Comeback Special segues into “Guitar Man” there’s a collage of those insurrectionary vintage clips that rip the tired complacent 1950s to its very core and imprint his surly sneering insolence across the decade, the Jordanaires, the ‘Jailhouse Rock’ grid, Scotty & Bill, DJ Fontana, the Dorsey Brothers TV show, the incandescent Tupelo Mississippi-Alabama Show news-footage from 27 September 1957.

There were always four Beatles, to check and balance each other. There was only ever one Elvis. With all the sycophantic Memphis Mafia his celebrity could buy. The original black-&-white movie clip of “Love Me Tender” blends into stills of him with co-stars Ann-Margaret, Dolores Hart, Debra Paget, Juliet Prowse and Ursula Andress. Those Pop proto-video movies that were sent out to tour the world when he did not. 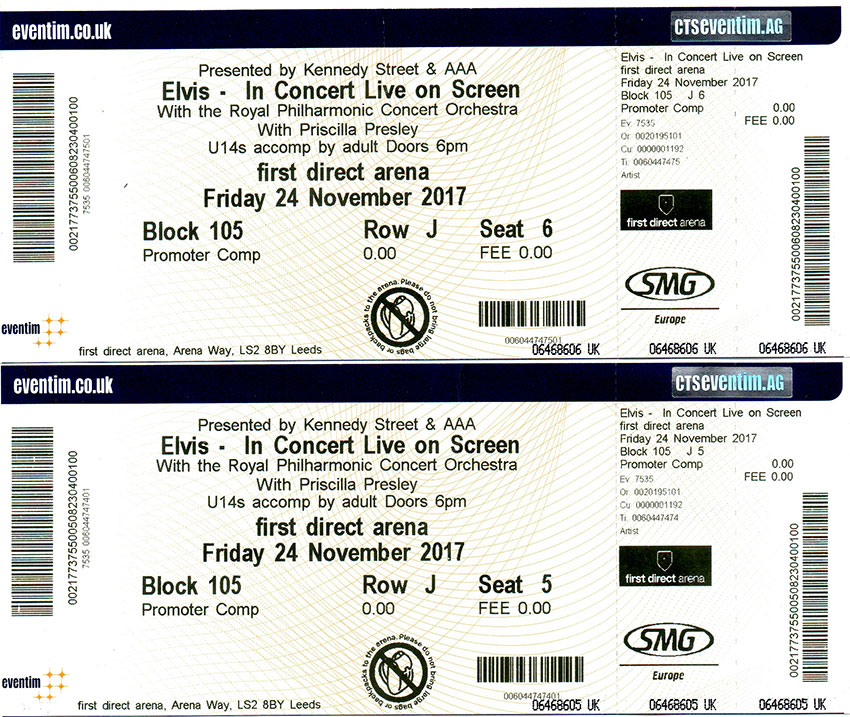 Priscilla explains the “It’s Now Or Never” history, how it took just twenty-minutes to add lyrics to “O Sole Mio” (earlier adapted for Tony Martin’s “There’s No Tomorrow”), and how it was ‘on the charts’ for five weeks in America and eight weeks in the UK. Of course, she means it was no.1 for those weeks, not just on the charts! Although stilted and hesitant tonight – despite her commendable role in three ‘Naked Gun’ comedies, a Wimbledon Pantomime, ‘Dallas’ and Graham Norton chat-shows, she’s the astute curator and architect of this re-imagining project. Bringing Elvis here, to freezing gridlocked Leeds. Maybe if Elvis had listened to her more, and to Col Tom Parker less, things might have worked out more positively? Challenging, testing and pushing him. Yet “Blue Suede Shoes” brings the orchestra up and jiving. “Memories” gets the glow-phones swaying aloft… just like it’s a real gig. Not a virtual one.

The close-down is “If I Can Dream”, which is as much a glimpse of what’s within his psyche as he ever committed to vinyl. ‘We’re trapped in a world that’s troubled with pain, but as long as a man has the strength to dream, he can redeem his soul and fly…’

Elvis is dead. But tonight in Leeds, he flew, he flew. 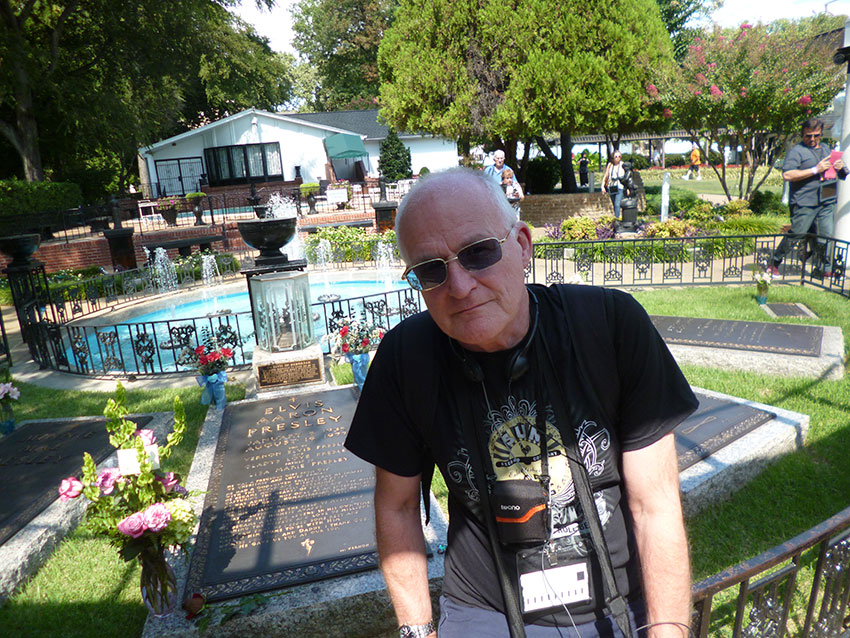 Tweet
This entry was posted on 6 December, 2017 in homepage and tagged Andrew Darlington. Bookmark the permalink.