In Conversation with a Dying Friend 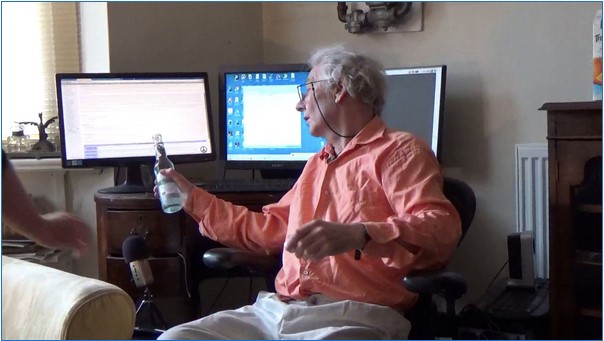 “Death… the most awful of evils is nothing to us, seeing that when we are,
death is not yet, and when death comes, we are not.”

A friend rings me to say that he’s dying.
He says he wants no one to know.
He wants to “crawl off like an animal.
“To hide under a stone. Just to go.”

He adds, “But I know that I’m going nowhere.
“That my atoms will just disappear.
“There’ll be a moment when I’m me, and then not.
“I know that there’s nothing to fear.

He says he liked what used to happen in Crete:
“Have you heard of the Cretan custom?
“Since when you die you’re dead for all time,
“They don’t want you to be spoken of again.”

“I’d also be happy at not being mentioned.
“I don’t wish to be dug up or disinterred;
“So, please, not even a fleeting reference –
“I think I’d rather be left undisturbed.

“As I’ve been practicing Zen Buddhism for years
“I’ve been aware of my dying every day.
“I know exactly what it’s like and I’ll go quietly.
“No nonsense about having a last say.” 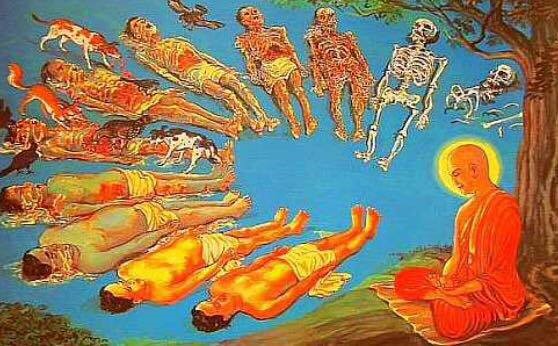 Although he spoke of his death with indifference
And in the most matter of fact way,
I welled up with a tear and felt a frog in my throat
Only for his coolness to shoo them away.

I was on the point of saying it’d be quite a wrench
For those he’d be leaving behind,
But somehow I felt that this would be interfering
Given his fatalistic frame of mind.

Then, as if telepathically, he blurted out, “Look
“I’ve got eighteen tumors on my lungs.
“There’s nothing that can be done. It’s spreading,
“That’s why I’m giving away all my things.

“Yesterday the doctor showed me the scans
“And asked me how I was feeling.
“He said, ‘you know it’s sooner rather than later?’ I said, ‘Good.
‘I’ve no wish to shuffle about drooling.’

Mike had also to contend with a heart condition,
A pig’s gland once being used for a by-pass,
Prompting Mike to say when offered bacon
“Do you think I’m a fucking cannibal?!”

He was now told no more bypasses were possible
And asked me, “You know where I can get any heroin?”
I said “No” then to divert him I floated a whim
That the NHS should be given Afghanistan.

There was more such jokey banter about geopolitics
As if he was loth to be estranged from the living,
But we were uneasily self-conscious given the knowledge
That his ‘now’ was now overlapping with heaven.

While he was speaking I realized I was being given a lesson
In how to understand dying and death:
A friend was staging their own dress rehearsal of how
To behave before drawing your last breath.

He put the ‘phone down and then he rang back
To tell me the cancer was biting his brain:
“I don’t think I told you but it’s affecting my thinking.
“Forgive me if I’m telling you this again.”

I agreed it had the ring of truth then I thought,
‘Oh Mike, don’t let this be happening to you.’
As if reading my mind he said, “Death’s incomprehensible
“But, believe me, there’s nothing you can do.”

“I’ve got a plastic bag and if the pain’s too much
“I’ll put it over my head.
“Then I’ll fill it with a squirt from a cylinder of helium.
“It’s painless, apparently. Which isn’t so bad.”

I wanted to remonstrate by saying that suicide
Was always a case of mistaken identity:
‘The person you kill can become someone different.
‘You’ll be terminating a future serenity.’

But I knew he’d simply say, “that’s all bollocks.”
He said he didn’t regard dying as a problem:
“I’ve done it hundreds of times while meditating –
“I’ve swatted that odious little hobgoblin.” 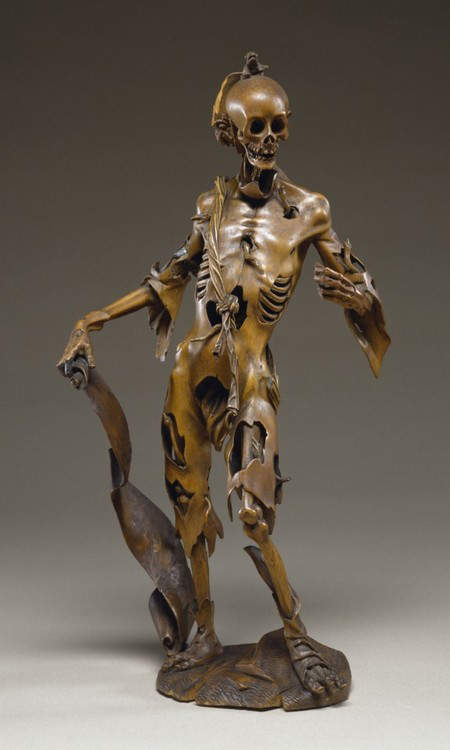 He was seeing death as a person now, as a figure,
Like those German carvings of living ghouls
Which have, “I am what you will be. I was what you are.
“For every man this is so” – incised on boxwood scrolls.

“Have you ever seen that picture of death pissing?
“It’s called Death Urinating. It’s by Max Klinger.
“It’s of a skeleton holding its cock’s cartilage and it’s aiming
“A streak of piss into a lake or a river.

“And I’m being pissed on torrentially by death at this moment
“But I’m fucked if I’m going to let death know it –
“So suck it up death, you fucking prick. I’ll fuck you.
“I’ll fucking fuck you, you nauseous shit.”

“There. I’ve got that off my chest. Now where were we?
“What were we talking about? Death?  Oh no!
“I want to talk about life. But now I can’t. I’ve been sentenced.
Okay so I flirted with death but now I don’t want to go!”

I felt he was angry with me for not being in the same boat –
Not just yet at any rate – then he continued his conflicted tirade
“Who said , ‘I’m always angry when I’m dying’?
“Well I’m angry with this predator death. Death’s got it made.

“Because everyone’s a customer, aren’t they? so he’s doing pretty well.
“The dead outnumber the living by a factor of what?
“Millions? Billions? Trillions? By now it must be gazillions.
“It makes you think that death… death should be shot. 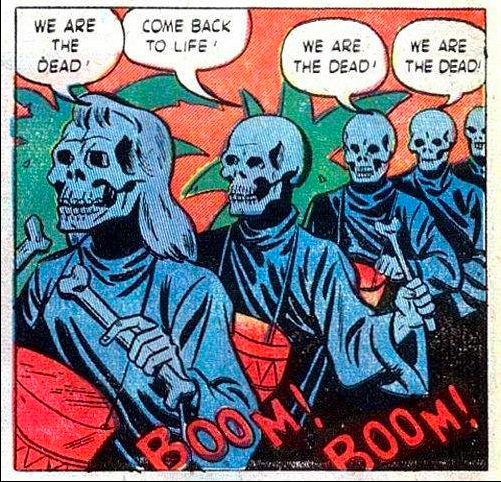 “According to the Greeks you’re given a happy day
“On your penultimate day just before you die.
“So I’m wandering round now with a bottle of gin.
“No protein, I’m just getting totally high.

“But look at death. Just look at the way it’s depicted.
“Who wants to be seduced by that creeping zombie?
“Who wants to be lured into a state of non-existence.
“Shouldn’t death be more selective, more of a nimby?”

Changeable as the wind my friend had become reconciled
To death when it seemed a bit more remote
But now, when it was more immediate and imminent,
He was fighting it, fighting it laughing, and with all that he’d got.

“You know what? Thanks to nano-bio-info-cogno-synthetic technology
“I’m going to download myself into your computer
“Then pounce out at you while you are checking your email –
“A pioneer of cyborgian neo-humanity from beyond the grave.”

“Thanks to that I can by-pass this alien implant
“That bleeps incessantly and keeps us awake
“With its doom-laden voice saying ‘You’re programmed to die’ –
“The Garden of Eden’s wicked snake.

“The serpent is paradise’s party pooper.
“The serpent’s a nightmare symbol of death.
“Then there’s the ourobouros – is that death eating itself?
“Oh God, none of it makes any sense.” 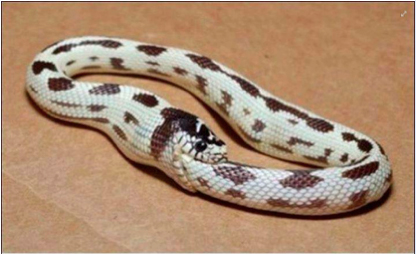 He was lurching in fiendish confusion around the room –
Clutching the phone, and the gin and a joint.
He was turbo-charged by a volcanic lifeforce despite himself.
Saying, ‘I want to live’ but then adding, ‘what’s the point?’

“What’s the point? because we’re all utterly doomed.
“You know why we have nuclear power?
“It’s to ensure we’re supplied with weapons grade plutonium.
That’s depraved. Isn’t that totally depraved?

“The industry doesn’t give a fuck about the waste.
“I’m glad I’m not going to be around much longer
“There are things that I just don’t want to see:
“Kids with vampire marks on their necks –

“Because they’ve had their thyroid glands removed.
If such a vampire circus is the high watermark
Of our civilization, Then we’re disintegrating.
Fuck me. What a lark. What a fucking lark.

“You remember the old Metropole in the Edgware Road?
“The music hall? I feel like I’ve been invited to watch an unmagical cabaret:
“To watch a ghoulish someone sawing their leg off.
“And that someone is me. It’s me. It’s me.”

Three days later Mike’s nephew, Nicky Victor, rang.
“I’ve got some bad news –  Mike’s committed suicide.
“He put a mask on and gassed himself. He knew what he was doing.
“He left behind a list of the people whom he loved.”

“The police came in droves because a gas cylinder was involved.
“They took his sudden death to be a terrorist incident.
“The fire brigade came as well,” Nicky laughed at their over-reaction
And yet they were right, for death is life’s insatiable terrorist.

On the floor were several scrumpled drafts
Of his final message to the world:
“This morning I awoke with the certainty
“That it would be my last.

“I have rarely spent a more pleasant morning…
“No thoughts of the future or of the past…
“Just fleeting images of those I love. I have gone nowhere…
“An appropriate place for the imaginary. (Signed) Mike.”

7 Responses to In Conversation with a Dying Friend