Posted on 1 November, 2017 by Heidi Stephenson 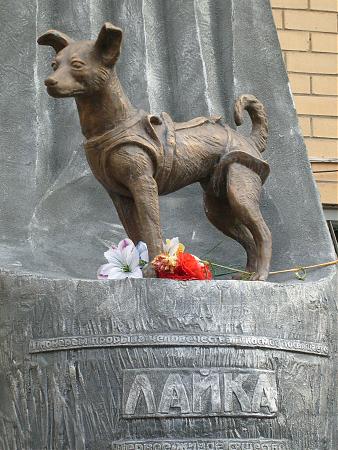 “The more time that passes, the more I’m sorry about it…
We did not learn enough from this mission to justify the death of the dog.”

“We can only pray in this time of aloneness and suffering for Laika, for Curly, that’s her real name*,
that God will be merciful and speed the end. This voiceless cry of mercy as this satellite spans the earth,
should be long remembered as a symbol of the torture the animal world must go through.
And I don’t mean to be facetious at all, but this needs to be remembered,
there’s a female up there, circling Mother Earth.”

The words of a Humane Society spokeswoman in 1957

* Her real name was Kudryavka, “little Curly” because her tail was expectant and curious, like a piglet’s.
The Soviet Chief Designer decided “Laika” (little barker/howler) would be easier for the US press to pronounce.

“Am I the first human in space, or the last dog?” 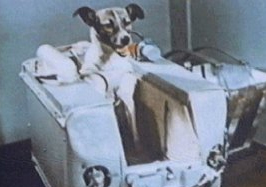 5 A starving stray is captured on the streets of Moscow, along with dozens of other female strays.  (Females are deemed more compliant.) They are sent to the Institute of Aviation Medicine to be torturously ‘trained’ for the Cold War’s International Space Race. Khruschchev wants a space spectacular to stun the Americans with Soviet prowess.

4 The cosmo-dogs are forced to undergo horrific experiments as the conditions of space are simulated. They are strapped down in centrifuges and spun at high speeds to mimic the high acceleration of take off and G-force (many do no not survive); they are immersed in icy water for long periods of time; they are subjected to excruciatingly high levels of noise (ear drums routinely burst); they are denied food and water and made to eat protein capsules; they are restrained in ever smaller spaces and denied movement; they are isolated.

3 Laika is chosen as she is young (just 3 years old,) photogenic and has a calm, trusting, stoic disposition. There will be only a few hours of basic life support on board her tiny space craft (the size of a washing machine drum inside, just 80cm x 64cm) as the scientists’ only aim is to prove that a living being can survive being sent into zero-gravity.  Laika spends her final 3 days on earth on the launch pad, strapped down in her coffin, in sub-zero temperatures.

2 On the 3 November 1957, Sputnik 2 launches from the Baikonur Cosmodrome in Kazahkstan, fuelled by exploding kerosene, and Laika is sent on her terrifying, one way, (and non-consensual) mission. She is the first living being to be shot over 1000 miles up, beyond the Karman line, into space. Her pulse rate soars to over three times its normal rate during the launch (260 beats a minute) and is very slow to decrease, an indication of the extreme stress she is suffering.

1 After 7 hellish hours the sensors recording Laika’s vital life signs are dead.  Because of a computer malfunction and some thermal insulation tearing loose, the temperature in her tiny cabin rises to over 40 degrees. Water boils at 36 degrees, (body temperature,) at an altitude of just 61,000 feet. Laika is 966 miles up! She suffers ebullism. The membrane in her mouth, her eyes, her nose starts to bubble; her internal organs, the blood in her veins. She boils alive.

Sputnik 2 orbits another 2,570 times, with the dead Laika on board, before it re-enters the earth’s atmosphere, somewhere over the Caribbean, and burns up on 14 April 1958.

The sickening suffering and scientific ‘sacrifice’ of our fellow beings continues today:

View all posts by Heidi →
This entry was posted on 1 November, 2017 in homepage. Bookmark the permalink.