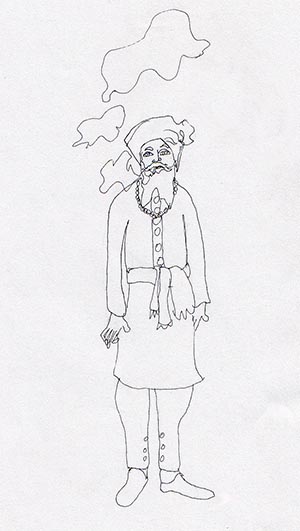 The man who goes straight

Smith an incongruous fellow is in Madras and while there is keeping this diary.

One evening I go looking for grass. It is now dark but the streets are still crowded, the pavements choked by a mass of people slowly moving past the brightly lit booths that line the waterfront. I stroll the whole length of the esplanade without being accosted, then when I have just begun to think this is not the night I am approached by a youth of about twenty. He asks me if I would like to buy some hashish. I say no but that I am interested in some grass.  ‘I can get you some for forty-five rupees,’ he says.

I laugh and turn away as if the figure is preposterous.

‘Alright, I will just get my boss.’ He calls something out and an oldish fellow with a stubbly grey beard joins us. They speak together for a moment then… ‘Come.’

The old fellow and the boy lead on, threading a way through the crowd and I follow them along the pavement to the end of the line of stalls. Here the street is not well lit and soon we descend some steps to a tunnel beneath the railway lines. The tunnel is dark and I wonder if I am going to get mugged, but they walk slightly in front as if to give me confidence. Their conversation is easy and there is no menace in the atmosphere.

At the other end we emerge into a quiet street and half way along they stop.

‘Give me twenty now and the other ten when I return,’ says the youth. ‘My boss will wait with you.’

I give him the note. He holds it up in the light of a street lamp. ‘See… Twenty,’ he points the figures. I agree and he steps away into the shadows and is gone.

The old fellow and I sit on a low wall to wait; he brings out a packet of beedies and offers it to me. ‘India smoke,’ he says. I take out a packet of cigarettes and suggest that he may prefer one of them. He would, and we light up, each from our own matchbox.

It is dark, the stars are like stars, there is a breeze coming in off the sea, it blows away the heat and flutters the clothes of the beggars who lie on the opposite side of the road, an occasional skeletal hand rising to adjust the assorted rags which cover them, their bodies trembling to the vibration of juggernauts on the highway below. People go to bed early here, I think.

We sit swinging out legs and puffing the smoke. He asks what country I am from. ‘London,’ I say. ‘Ah,’ he grunts and we exchange knowing looks.

Soon the boy returns and hands me a small packet. I give him the ten, and then because they have both been so civilised, another five. ‘Extra,’ I say.

He puts the five in his shirt pocket. ‘For me,’ then… ‘Here boss,’ he flutters the ten towards the old man who takes it with an easy smile.

‘My name,’ says the boy, ‘is Kumar. Some others call themselves European names like Mick and Billy, but I stay Indian. My name is Kumar and I go straight, not this way and that way, but straight.’

His hand cuts an imaginary Appian Way through the night.

‘This I get you is not a mix, it is Kerala. One smoke and your head will…’ He makes a slight hand gesture, I don’t get whether he is describing butterflies or trap-doors opening and shutting. I go for the trap-doors and we exchange knowing glances.

‘My name is Kumar and I go straight,’ he says again.

‘Come anytime to Parry’s Corner and you will find me.’

We shake hands all round and I walk away from them down the lamplit street until I am out of sight.

View all posts by David →
This entry was posted on 23 October, 2014 in homepage and tagged dave tomlin, grass, India in the day, Indian gentleman, nick victor, scoring, the hippy trail. Bookmark the permalink.