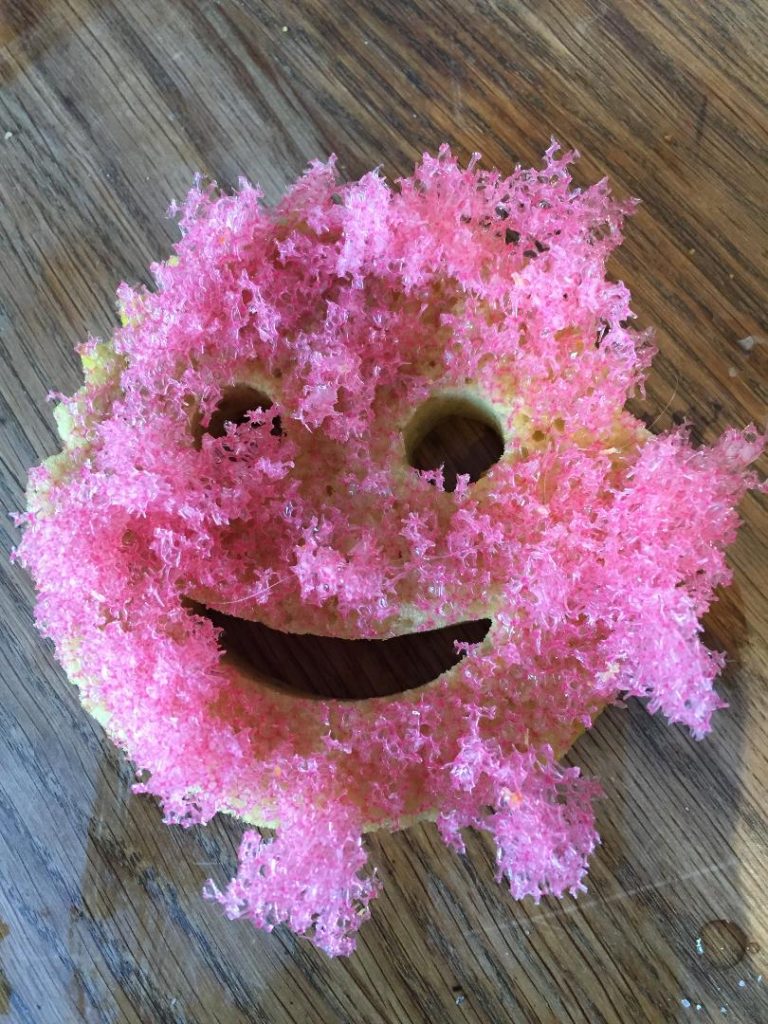 This is my pot scourer after a fortnight’s heavy duty, smilin’ through the frazzle  like its owner. But it’s a different atmosphere this week for us iso-lonas.  We’ve enjoyed the sunshine and tried baking bread, told each other how much fresher the air smells, found the psychic silver linings in our cocoons where self-hygge (Danish for comfort and contentment) rules.   I am in my home with more than one room, neighbours who shop, allotment with seeds in the ground, books to read, stuff to write.  Sure, I’m having a good virus.  No woman is an island and all that.  And I’m getting in touch with my inner Billy Blake.  If there’s all the world in a grain of sand – think how much there is in a house,  or a flat with tetchy kids, or a bedsit, or hostel, or – at least street sleepers are in hotels rooms.  Makes you think doesn’t it?    It might just be impossible to shut the Chancellor’s  Pandora’s box.   I’m starting to see him as the stargazer on Plato’s Ship of Fools – the only one looking up at the bigger picture, the only one fit to be captain in a dysfunctional crew.  It’s serious out there – catastrophic.

Looking out of my window, towards the Edgware Road, I watch buses with adverts on the side gliding by like weird moving pop art exhibitions, but with no-one to see them.  The electric cacophony of Times Square in New York shimmering for no-one in a Ballardian dystopia.  Doesn’t this show us the absurdity of capitalism?  Yet I lurch at the sight and sound of an ambulance.

Anxiety is generated in the gap between how things are and how we want them to be. But fear and anxiety are immuno-suppressants and we don’t need them.  Rationing media to knowing what we need to know is important, but listening to stuff half asleep means that trouble can seep into the brain. Like an interview on Radio 4 this this week with a man describing the death of a loved one.  After that, Johnson’s twitter feed, trying to sound Churchillian through his fever, spluttering about how important testing is, how vital to get the kits, how marvellous our NHS staff are, we’ll get them PPE  soon (I thought he slipped and said PPI), waffle this and waffle that, a weak echo of  ‘Our Finest Hour’.    Testing times indeed.   But anger is different – it can energise not enervate, and the anger at the  obfuscation and prevarication by this government is palpable.  That the neo-Darwinian notion of herd immunity was even in their minds makes me see Red.  You too?   I, for one wish our PM a speedy recovery, so that he can see his shambles of a government fall when Covid-19 is done.

Interesting that the removal of choice (staying in) can be liberating for the individual yet a disaster for Neo-Liberalism.  Good. Good also to discover new music.  Download some Christina Pluhar and her L’Arpeggiata ensemble’s covers of  Purcell, Handel and Monteverdi.  Good too to read some fine, poetic prose about anything other that’s what going on, at bedtime. I’m enjoying Stone Upon Stone, by Wieslaw Mysliwski about a Polish farming village before WW2.  Sets me up nicely for the allotment next day.  Yes, the days are full of purpose for isolates, as well families doing their best, health workers in the eye of the storm, oldsters realising they have neighbours and public workers appreciated like never before.  Then there are the writers, artists, comics, and musicians still sweating it out.  I hear that the Edinburgh festival is cancelled this year, but at least it’s ta ta to the tattoo.  (thanks to John Hegley for that one)

View all posts by Jan →
This entry was posted on 4 April, 2020 in homepage and tagged Jan Woolf. Bookmark the permalink.