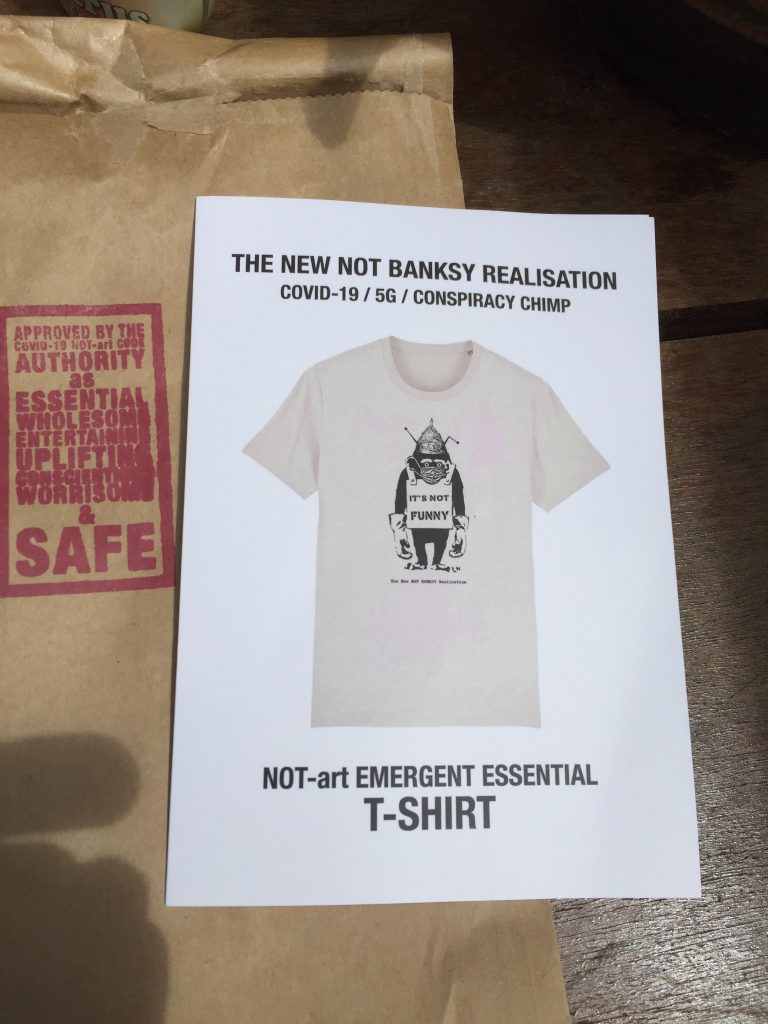 My new T-shirt arrived in the post today.  I shall also treasure the inner safety envelope as a fine example of an early phase Covid lockdown woodblock print.  For although we’re dicing with death, the lads down at L-13 Light Industrial Workshop can still entertain; Lord love ‘em.  There is also a healthy irreverence for Saint Banksy, a chip off the old block (geddit?) and since he’s a saint I’m sure he doesn’t mind.  The best satire seems to be found off piste, or among the piste off. As indeed they are at L-13 under their gleeful exteriors.  For humour and irony will help see us through this bad Covidian dream.  Or is it a good nightmare? a wake up (screaming) call?   But I wake up hitting the routine.  Exercises, meditation, tea with the London Writers Salon  (zoomsters saying what they’re doing – doing it – then saying what they did).  Breakfast, e-mails, walk, coffee with a phone call.  Writing, lunch, snooze, writing, tea, allotment jobs and watering.  Then wine and dinner, live streaming or dead TV, more wine and dessert. Book. Bed.  In all of this there might be a SD walk with another citizen of the locked down.

But back to the London Writers’ Salon. I’ve just discovered them on line; they’re great and mostly young, so don’t go on about conjunctive clauses. I’d furloughed the characters in my novel, as their situation didn’t feel relevant to the one we’re in. But with the support of the LWS, I’ve found a way of giving an elderly Polish painter, working class art handler, and a special needs teacher, an hour’s socially distanced exercise on the page every day.  They have between 8-9am to frolic and ponder in Tate Modern in 2003 where a citizen’s arrest of the PM for the crime of war is being planned. This is not a spoiler by the way.   Next week all my characters will be allowed to meet in the same space, unless somebody transgresses, and they all have to stay in again.   Must admit, I’m finding the tone of the government’s advice quite funny (though I know it’s not) like a head of year from a public school speaking to an unruly year eight class in a Dagenham comprehensive.  Imagine having to stay behind with deputy headmaster Gove?

Imagine too, Julian Assange’s lockdown day.  I’m sure he’s become good at them, he’s had so many. Practice makes perfect, isn’t that what they say? Perfectionism used to be seen as a virtue, but now perfectionists are looked upon with suspicion; anal at least, creepy at most.  But perfection is where danger lies, because there can be no capacity for change.  When nothing changes we are becalmed, unmoored – adrift.  And Julian Assange has become ill.  Locking a man up and throwing away the key for journalism that exposed the truth about American war crimes after the invasion of Iraq is an infringement not just of human rights, but also investigative journalism.  Julian revealed the truth, and for that has had the utmost cruelty inflicted on him – solitary confinement.  Investigations into alleged sexual misconduct have been withdrawn, but muck sticks, and many are simply happy to see him remain locked up as a ‘sex pest’ or have him extradited to the US as a traitor. This would almost certainly mean life imprisonment and an early death.  We are killing him, and but a for a handful of truth defending activists no one would know or care.  So next time someone asks, how was your day in lock down, spare a thought for Julian Assange.   Here’s another image for a T-shirt.

View all posts by Jan →
This entry was posted on 30 May, 2020 in homepage. Bookmark the permalink.