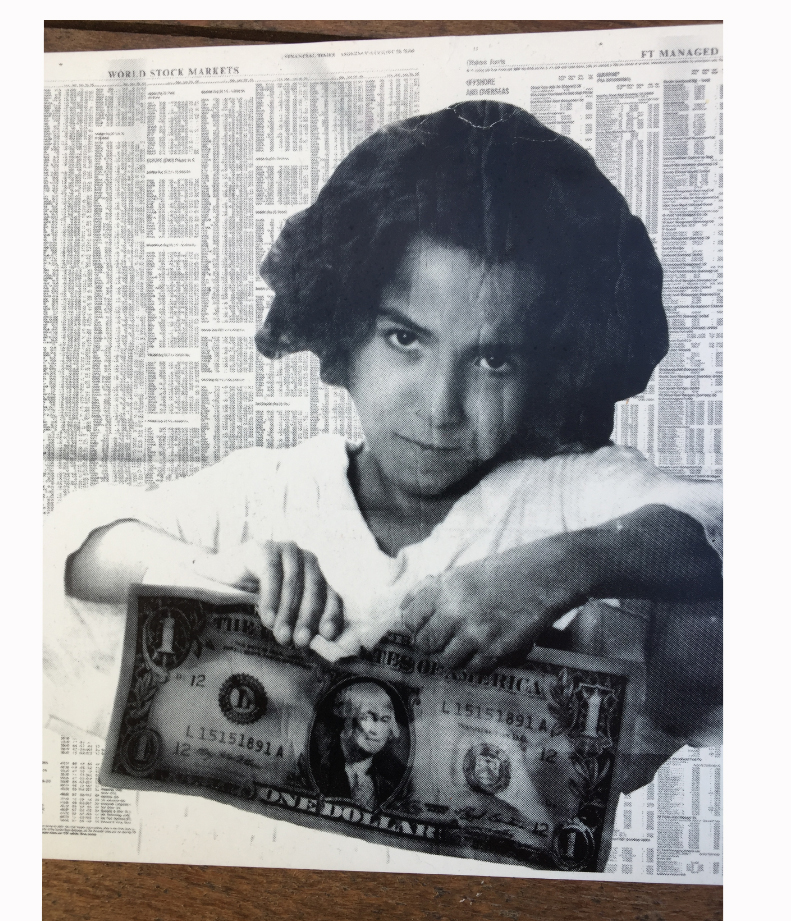 I can’t credit the image as I found it in on the pavement on the Caledonian Road last year; a small photomontage. I thought it so good I took it home and stuck it on the wall.  The anger and clarity in those eyes, the image of youth tearing into that powerful symbol of the USA. On the back is stamped ‘Reclaim the Streets.’  Anyone recognise it?

‘I cant breathe.’  A breath-taking slogan – and I don’t mean to be slick with words.   A man’s breath was taken away by a policeman, and it took him nine minutes to die.   At the rate of sixty breaths a minutes, that is a slow 500-second death.  George Floyd used three of them to say ‘I can’t breath,’ and a few more to repeat  ‘please’.  So the cop was a torturer too.  The Israel-Palestine News, (June 2) reports that the Minnesota police force received training from the Israelis in knee on neck restraint – a technique used on many Palestinians in the Occupied Territories. What force of hatred can be in a man to do that to another, prone and held fast, whatever he’d done. Not even on the battlefield do men do that. Even if there is inclination, there isn’t time.   This persistence of hatred represents the dark underbelly of much of America – its fascistic leanings.  For if Trump represents the ego of half of a divided nation – those who support his belligerency are the id.  How weird, unsettling and insulting to hear him say at a press conference that ‘George is looking down on us’ as the economy ‘thrives’.  I thought for a minute he meant Washington, but no, he meant the murdered man.

Trump ‘deplores’ the violence – ‘well’ (in the words of Mandy Rice Davies) ‘he would, wouldn’t he?’ But what about the violence of the US military?   Did not Julian Assange expose terrible American violence after the invasion of Iraq?  Trump deplores the looting.  Does not Wall Street loot and plunder? Haven’t our public services both sides of the Pond been looted over the decades?   But yes, best not to be violent – most of the action is peaceful and highly symbolic – inspired by Mahatma Gandhi, whose non-violent protest removed the British colonisers from his country.

Knowledge precedes action.  Even staying informed is action – whereas passive consumption of a curated supply of media information is not.  That so many millions of people are angry and marching, because of a racist murder is heartening.   ‘It woke the giant’ in the words of a retired US army general (not on Trump’s watch, I might add).   People speak from their wounds not their scars.  There seems to be a direct line with slavery and I wonder how long it will take for the eugenicists to crawl out of the woodwork?

View all posts by Jan →
This entry was posted on 6 June, 2020 in homepage and tagged Jan Woolf. Bookmark the permalink.