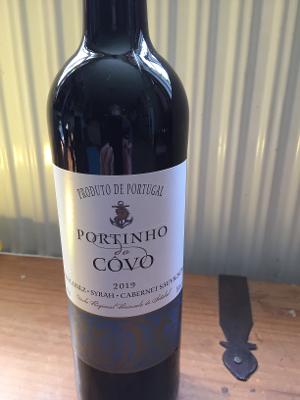 Stay alert!   Tell Trump that it wasn’t the Chinese, but the Portu-geezers what done it.  Here’s a bottle of the stuff, snuck in with my order.  But I’ve been sharp – oh yes.  Poured it straight down my throat after washing my hands twice.

It used to be said that sarcasm is the lowest form of wit, but it actually comes from the Ancient Greek, sarcasmos, the tearing of the flesh – or saying that which is not true.  In lockdown language becomes more fascinating, yet I’m finding our satirists disappointing – contemporary speak for awful. With so much material out there, many of them can only mock the facial features of our Chief Medical Officer.  Really?  It’s all so safe and puerile, very British public school. I understand about unity, national morale – and that this is the only government we have at the moment, but hey.  How about a bit of healthy subversion, like  – they can run up enough military uniforms in wartime but not the right amount of PPE.

I’m working on a submission to my union, the Writers Guild for a group pitch to the BBC for ten-minute film scripts on lockdown.  I’m enjoying ITV’s superb series of shorts Isolation Stories, yet they’re all domestic in their themes.  I’m wondering how political I can be with Auntie Beeb?  But deadlines are invigorating. Ted Hughes said that the deadline was a form of crisis. As it gets nearer adrenaline is released and courage is found.  Cour-age – blood to the heart – flight or write.

So much art comes from community so I was puzzled by a piece in the Paris Review about that famous Iso-lona Rousseau.   Two years before his death in 1778, Jean-Jacques Rousseau set forth his vision for a writing life lived beyond the confines of community

This wasn’t Rousseau, but the critic, and I wondered about the choice of words ‘confines of community’. Maybe it jumped out because I miss it so much.

Watching the  People’’ Assembly on line, I heard sobering facts from John Hendy QC.  Like the halving of state funding for the Health and Safety executive.  That workers going back into this dangerous situation would actually be illegal if the employers insisted.  So the onus is on the worker – which doesn’t break the law. What insidious Government thinking; the whiff of the management consultancy about it. A leading question from the chair Laura Pidcock was – ‘how are they getting away with it?’

I’ve embedded some flash fiction. I wrote it the day after last year’s general election, December 13th  – with no idea what was in store. As satire, it has a certain prescience.

‘- Not the few,’ says the Prime Minister sitting back in his chair, hands clasped   behind his head, feet on the table.  ‘That was an excellent slogan, yes?’

‘You should, Prime Minister,’ says the special advisor. ‘How?’

‘We have a vast aging population,’ says the Prime Minister.

‘Because of that bloody welfare state.’

‘Of course.’  The adviser shrugs,

‘Please.  Numbers, local authorities, state of health, levels of drain on the economy – that sort of thing.’

As the special adviser leaves the room, the Prime Minister swivels his chair to look at the portrait of Churchill glooming down on him.  I won the war but would never have allowed a welfare state, he seems to be saying.

‘For the many, not the few eh, Winnie?’  Says the Prime Minister. ‘I will apply it to time itself.   Voluntary euthanasia will cut welfare costs so the many can have resources currently dedicated to the few. Brilliant.’

Never, old Winnie seems to growl. And the special adviser re-enters the room with his special computer.

Yes, how ARE they getting away with it?

View all posts by Jan →
This entry was posted on 16 May, 2020 in homepage and tagged Jan Woolf. Bookmark the permalink.