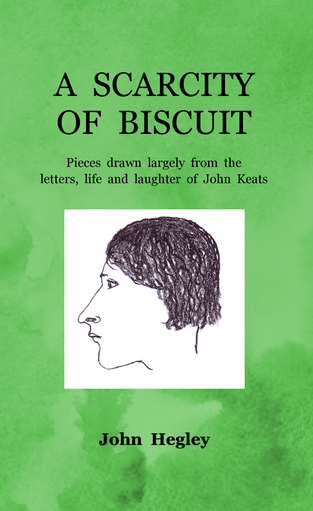 …is an alchemist. Spinning pain into laughter without losing profundity, finding the profound in the mundane (paper bags, spectacles, celery stalks) without whimsy – and sending up the portentous.  Hegley was poet in residence at Keats House, Hampstead London in 2012. The resulting collection A Scarcity of Biscuit is a poetic conversation between the Johns Hegley and Keats, where peosy, letters, musings and the facts and feelings of their lives intertwine.  The contents page reads like a stacked series of haiku; tempting treats like the maps you used to get in boxes of chocolates.  We open with a ‘celerbration’ of celery stalks – here is John Keats from a letter to his bother and sister on 16/12/1818

‘nothing particular happened yesterday evening, except that when the tray came up, Mrs Dilke and I had a battle with celery stalks – she sends her love to you.’

Which triggers this opening poem from Hegley –

You played the way you worked, John Keats
played hard.
With Mrs. Dilke
With celery
en guarde
On the landing
With your landlady
A new event was marvellously made.
With the greenery
a lunging in, leguminous.

…and then four more lines. I can only quote so much under copyright, but it is funny and good, and accompanied by one of John Hegley’s drawings.

We move onto their shared melancholia, and the circumstances that brought Hegley to Keats House

I was down in the dumps and the dark
And then Maureen was there with a spark.
She explained I could come
And be John Keats’ chum
And how meeting that young man would mark me

I have a swimming in my head – And feel all the effects of a Mental Debauch – lowness of Spirits – anxiety to go on without the Power to do so which does not at all tend to my ultimate progression – however tomorrow….

After these expressions of vulnerability – and who has not felt like this?  – is a collection of delights, of ‘interviews’ with John Keats, imaginary collaborations, one of them a poem  Devonshire Raining where ‘words from John Keats’ letters are of the upstanding type.’

My history is blustery
The winds of change came after me.

Her wretched situation though is not delightful.

Had these Cockney Londoners (definition, born within the sound of Bow bells) met at a point in time half way through their birth dates, say in 1872, I imagine they would have been ‘muckers’, beating a path to the door of the young Thomas Hardy for poetry – or the social reformer William Morris for politics.  Who knows?  But they’re good friends in a Scarcity of Biscuit.

Get a copy from – https://caldewpress.com/

View all posts by Jan →
This entry was posted on 23 October, 2022 in homepage and tagged Jan Woolf, John Hegley, John Keats. Bookmark the permalink.