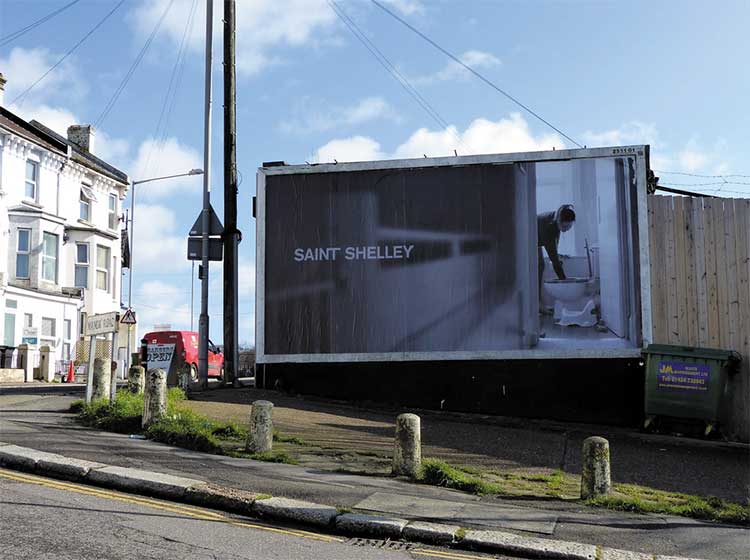 Julia Andrews-Clifford is a photomontage artist based in Hastings.  Her work explores the connection between the personal and the political, the private and the public, the person and the icon – through art galleries, pop-up shows and public installations. For International Women’s Day this year, she created a series of ‘Everyday Icons’, in which ordinary women doing routine domestic work photographed in a high fashion style popped up guerrilla-style on bus shelters and a billboard in Hastings. These anti-ads aimed to show the clash between domestic work and public recognition, especially as it affects women.

Keith Rodway went to her studio in Hastings to interview her, accompanied by her husband Ross. 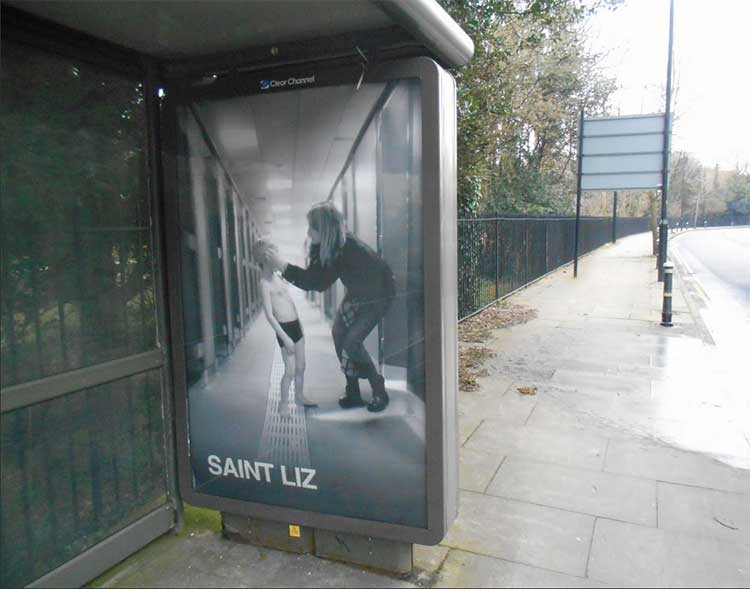 KR – How did you get into doing the billboards?

K – What are your feelings about gallery work?

J – That’s an interesting question. There’s nothing wrong with the gallery aesthetic but it does limit your audience to a certain demographic …obviously it’d be great to get [the work] into galleries as well, and I suppose if I think about it, it’s about the female gaze, looking at women and women’s experience. If that could be represented in the Tate, rather than Picasso’s nudes, that would be fantastic. But, in the absence of me getting into the Tate (laughs) and maybe just getting in to a gallery where there’s a very small footfall, or where people are going into a cafe but not looking at [the work], it becomes just furniture or interior design. With the billboards and at bus shelters, because it’s about advertising, it’s about representation; it’s the right place for it to be.

J – Provoke debate, and in an ideal world give women more representation – ordinary women doing ordinary things – having that hidden domestic life brought into the public sphere – making visible the invisible work that women do.

K – What’s the precise impetus behind wanting to do that?

J – Maybe my own experience of feeling taken for granted as an unpaid domestic labourer, and sometimes not getting the job satisfaction from that because of the isolation and invisibility of it. Even though I know it’s really important work.

K – What do you feel qualifies you to be making these statements?

J – I’m a woman, I’m a mother, I do unpaid domestic labour, I try and balance it with my own creative life and I struggle with that balance. I don’t qualify to speak for all women but I do qualify to speak for my own experience, and I do talk with a lot of mums and a lot of my thoughts chime with theirs. But I’m not really speaking for them, it’s more…Actually it probably is a more personal axe to grind (laughs)…maybe. Though I do think it’s more than that; the impetus comes from turning male gaze dominant representation on its head, and giving a more female slant on things, and having that out there.

K – How would you respond to the charge that the women who you might reach at the bus stop or [the shopping mall] don’t give a fuck about art? Or might find the whole thing patronising and presumptuous? If they did?

J – (laughs) I’d hear that. I can see that might be a thing certainly – you know, ‘so what, I’m too busy getting on with my life making money, making ends meet to be concerned with such a thing’ – like the debate between the suffragettes who were middle class privileged women, as compared to the working class women who didn’t have time for such debates. So I’m totally aware of my privilege in that respect – but it was the same argument for suffragettes, they were arguing for a cause that they thought would help all women and they had the financial stability to do that, and they were well intended – so I suppose I feel similarly in trying to do something  with that privilege.

K – I ask that because once when I was putting up flyers [for an art event] a guy came up to me – I’ve seen him often, I think he’s a street sweeper – and said, ‘that looks interesting, what is it?’ and I said it was for an art show, and I asked him if it was something that would interest him. His attitude completely changed. He said quite emphatically ‘No’ – which I completely understood – why would he be interested? It was a completely honest response, which you wouldn’t necessarily get from someone who might not want to go for other reasons.

J – It is off-putting, which is maybe another reason for not wanting to be in the art gallery, because it’s like an arthouse cinema – with avant-garde art the danger is that its radicalism misfires because it’s a very elite niche audience who are going to see it. I myself used to be intimidated by galleries and arthouse cinemas because I saw them as being pretentious, and bastions of middle-class white privilege. Later, I realised that was a very disabling point of view, and that there is a lot of fun and joy to be had. And with my teaching, it’s a lot about breaking down those barriers, and about making [art] more accessible. That’s not to say ‘Oh, you need to have this art in your life’, but it’s about not cutting your nose off to spite your face, or someone else doing it. Once you get past those barriers there’s a debate to be had for everyone.

K – What would you say to women who are quite happy as mothers and carers, and who don’t necessarily agree with you about the disparagement of their lives?

J – I would say that it’s not about individuals, it’s more about a system, it’s more about unpaid domestic labour than it is about individual experiences…but if they don’t see the problem, then the work falls short, which of course is a disappointment for me but I can’t dispute it. I’m interested in the fact that all these years after second-wave feminism argued that barriers have been broken down, Hillary Clinton did not win the presidency, that there is still entrenched gender division. But of course there will be individuals who, if they experience that, might not object to it. It’s as much about where feminism has got to as anything – and how we can represent women’s experience as equal to men’s  but different, and have value attached to that. And that comes back to the over-worked mum who’s got a full-time job and kids and probably doesn’t understand or appreciate what feminism is because they’re completely overwhelmed.

K – For me the issue is that a lot of feminism stays in the Academy, or where middle-class people gather to talk about what’s wrong with the world. It assumes the right to speak universally without necessarily considering its impact on the lives it presumes to champion.

J – So what’s the point of art, basically? it’s just about getting more female artists, more female advertisers, more female filmmakers- and then you would get a range of voices out there. For whatever reasons, it is still a male gaze – of course it’s changed, and of course I’m generalising, but you talk about people not being interested in art, but I think film is art, I think advertising hoardings are a form of art – it’s imagery that we are absorbing, and I think that’s incredibly powerful. It’s really there where art comes into its own, because people can say ‘oh it’s just a peripheral thing in people’s lives’, but billboards are like…furniture – billboards, films, TV, magazines, newspapers – it’s all being taken in, and that’s what I’m reacting to. It’s about getting different voices out there and if I just make stuff that I’m not even consciously thinking about, but it’s just my spin on things –

Ross – You mentioned the graffiti that appeared on the first billboard…It’s more the fact that there is a dialogue out there, and people are responding to it, interacting with it –

J – When we did the billboard this year a guy living nearby came out and said, ‘Hey, you’re doing it again, we saw the one last year, loads of people looked at it’ – and because he’s got a CCTV camera he saw people stop and look – so we’ve had a little bit of that…kind of nice feeling –

K – The thing I find with what I do, music principally, is that the person listening to it can have a completely different experience from the one you thought they were going to have –

K – You get it down, you mix it, you think ‘That’s it. That’s what it is, everyone’s going to see this, they’re going to see it exactly the way I think they should – but of course often they don’t…So anyway, is there anything you’d like to say to your public – your readership?

J (laughs) No, I don’t think so, I think it’s said with the work. I have invited responses through the Hastings Independent [newspaper] to nominate their own everyday icons – to ask ‘Who do you think is undervalued in the work they do – paid or unpaid’? So I’m aware of my lack of comprehensiveness on this but not much has come up so far. And the whole thing with the ‘saint’ – it’s not just women who are saints. I did do [the billboard] for International Women’s Day but I am going to do something for International Men’s Day in November.

K  – Is this a debate about art, gender, privilege, lack of privilege – all those things?

J – Maybe. I don’t know, I don’t always have conscious intentions with my work.

J – The irony that I need two tall, strong men to help me with getting the work out there is not lost on us! It’s hilarious. 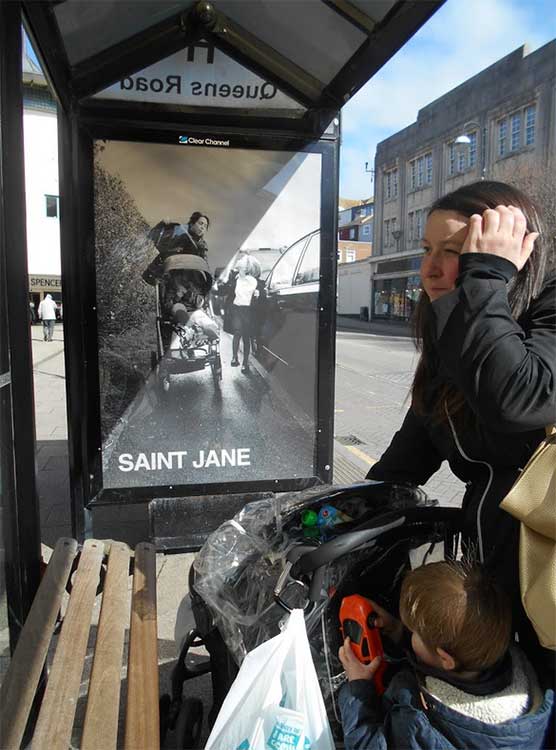 View all posts by Keith →
This entry was posted on 25 April, 2018 in homepage and tagged Julia Andrews-Clifford Interview, Keith Rodway. Bookmark the permalink.

One Response to Julia Andrews-Clifford Interview