Keep the Blood Pressure Up

Posted on 22 February, 2020 by Lawrence Freiesleben

A protest against Woodhouse Colliery There’s a post-modern atmosphere to demonstrations these days – at least compared to my memories of the 70s and 80s. “O.K.” encouraged a local XR organizer during last Friday’s protest against West Cumbria Mining’s proposed Woodhouse Colliery[i] by environmental groups, “Let’s do a bit more shouting to keep the blood pressure up and then take a temperature check and decide what we want to do next.” Anger becomes distanced – both by these consensual bouts of chanting, “LEAVE THE COAL IN THE HOLE”, and by the friendly non-hierarchical discussions between. Yet I can see how essential this is. It would be difficult to maintain an attitude of non-violence in the face of a Government decision which local MP Tim Farron, has called “a kick in the teeth in the fight to tackle climate change”.[ii] It’s also hard not to feel a need to compensate for all the absent supporters we know are behind us: to make each one of us count for a hundred. It may be an inappropriate metaphor, but it’s only ever the tip of an iceberg who are able to attend – which is a shame, since if the whole mountain were present, even only its local faction, it would surely force the accelerated rate of change required. After permitting the inherent criminality of Capitalism and indulging consumer materialism for so long, will this further silence contribute to the human downfall? Outside Kendal County Hall, despite, the supplications of the green brigade and the warning chirping of the colourful canaries, councillors refused to come out to answer our questions. Were they really too frightened of the television cameras – aware perhaps of the stupidity of the claim that Whitehaven’s proposed deep-mining of coking coal at Woodhouse would be “carbon-neutral”!

In reality, Extinction Rebellion have revealed that this: “proposed coal mine will emit 8.4 million tonnes of CO2 each year, equivalent to the emissions of more than one million households.” XR have also pointed out that the extraction of coal is “projected to continue for 50 years – 20 years beyond the date by which the Government has committed to achieving net zero carbon emissions (2050).” 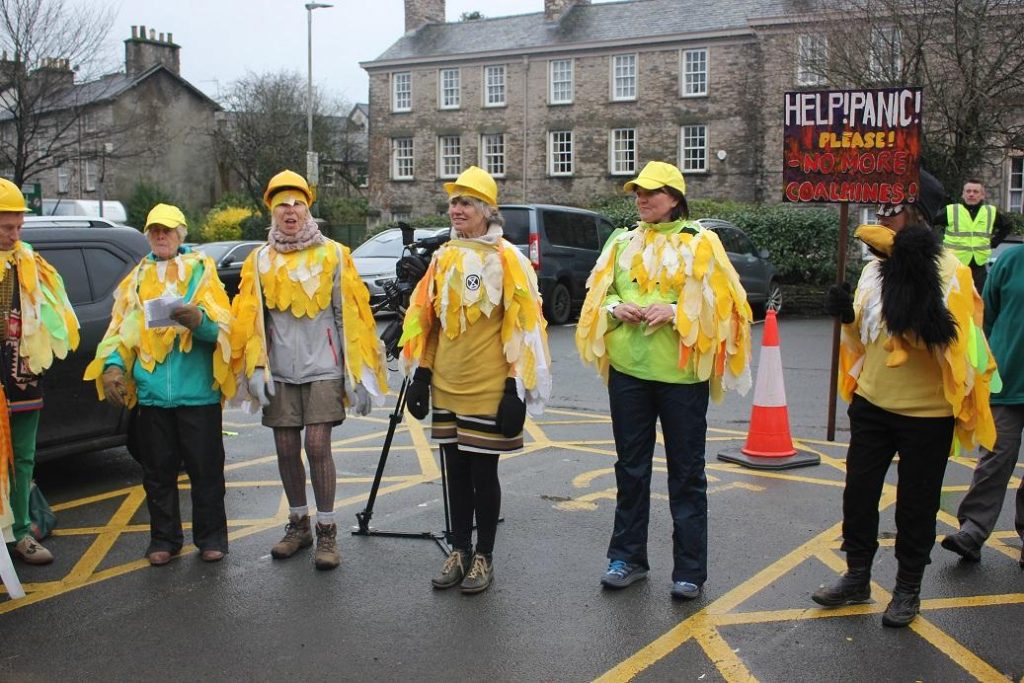 A young woman suggested we should storm the meeting chamber and demand the council answered our questions, and my heart, embarrassed by the velvet glove of chanting slogans, agreed. Clearly however, we knew this would be against protocol. With anger kept observationally distanced, chanting makes me self-conscious. Doing it anyway, I cannot help but laugh a little inside. On the surface, such conflicted emotions can make every demonstration appear as a lifestyle choice. Yet struggling to pace itself for the long haul, struggling for patience, the rage remains real. When the rest of the mountain – concerned about victimization by employers or torn by family commitments – joins in, then the rage may decline. It must be obvious that if change doesn’t come fast, there will be neither employers nor a future for families – unless it be some survivalist dystopia as racked up in No Blade of Grass?[iii] 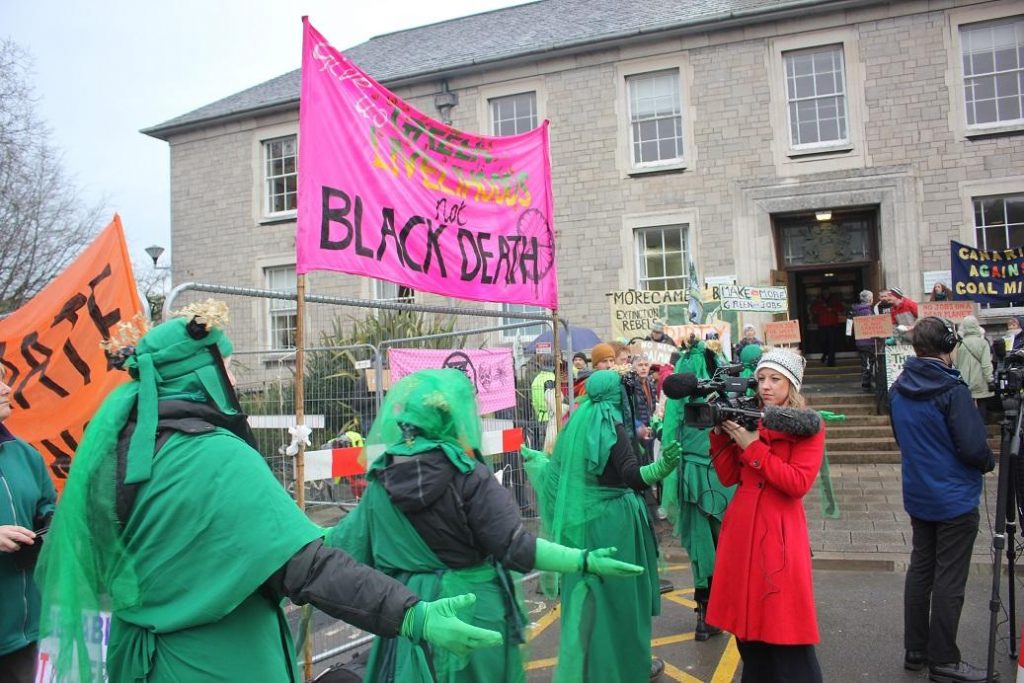 Well aware of the miners’ strike in 1984-5[iv] my sympathies then were strongly with the NUM. Though my personal impression of that time could be seriously questioned by history, to me the battle, albeit lopsidedly, embodied a class war. Arthur Scargill versus the Tinpot Lady. Or perhaps St. George against the Dragon? But it was never that simple . . . and of course the Dragon won. Perhaps many, and not only from the middle-class, breathed a sigh of relief after all the chaos and strife caused by strikes in the 70s? But what all too few foresaw, was the wider destruction that would ensue from the imbalance of power. In the aftermath of Union defeat, a destructive, elitist Government was given free rein. The degree to which the poor and the working classes were tricked by the Tinpot Dragon isn’t in dispute. She didn’t give a toss about the miners or about coal. All she wanted was to smash the Unions. Her trick has been repeated in various forms and many times since – most recently using Brexit and the short-sighted racism lurking within too many of the deprived or ignorant amongst us, to give crackbrained Boris a mandate. On a smaller scale this type of blackmail is being used to promote Woodhouse Colliery, with its promise of 500 jobs. To put this in context, over 1000 jobs might have been produced by building a steel recycling plant a few miles up the coast at Workington[v]. Although this latter scheme had certain problems, and was keyed into Labour’s Green New Deal – a deal whose greenness was fatally compromised by the inclusion of nuclear power[vi] – it perhaps deserved more consideration? Nuclear power by contrast, has always been a highly certifiable form of lunacy. Its long-term potential for pollution should have ruled it out decades ago. We must make do with wind, water and solar power. It’s that or nothing. 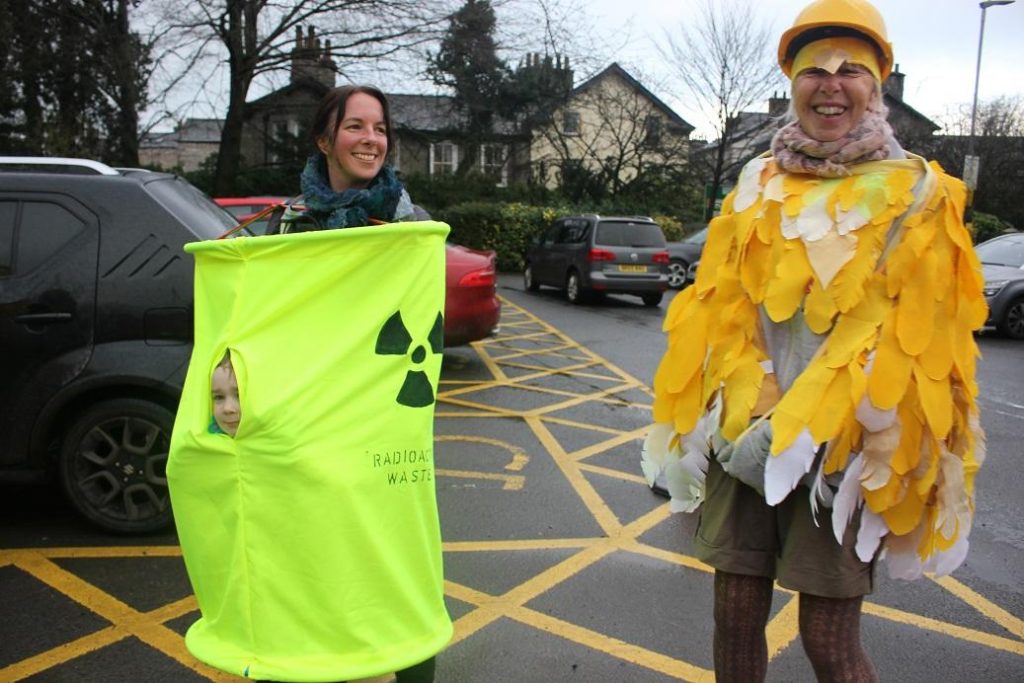 How the view of coal has changed since the 1980s! – despite that it was doing just as much damage then. A key slogan I endorsed in 1984 was Coal Not Dole. Thirty-six years later this has been replaced by: Keep the Coal in the Hole. In an ideal world, with the incentive of creating new jobs in renewable power for their members, the Unions, had their solidarity been undiminished, might have seized that nettle, that need for change. We all knew it was overdue. Instead, the avaricious multi-nationals, with the Government connivers and dunderheads, have had everything their own amoral way. True, in the 70s and 80s – indeed historically – Trade Union demands were just as materialist as Government policy, but at least the Big Grab was spread more evenly, was in favour of the many rather than the few. Had some of the best reforms forced through by Unions or proclaimed by practical idealists such as J. B. Priestly[vii], been maintained and developed, many of the mistakes made since, could perhaps, have been at least tempered. 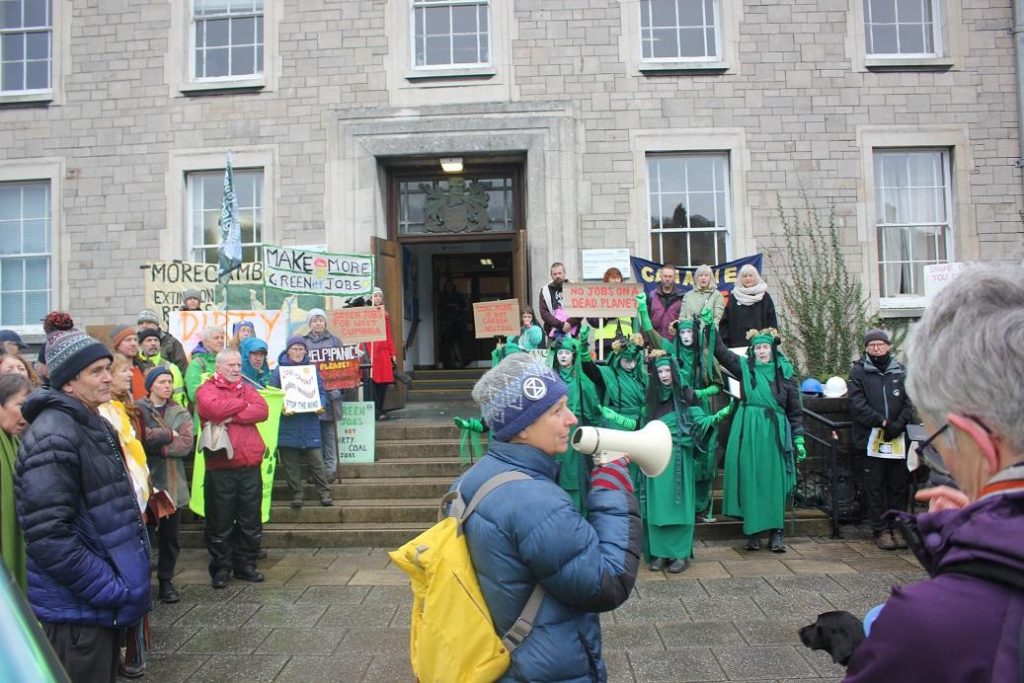 Working in a factory in the late 80s[viii] the first thing I did was join the Union – in terms of peer pressure, a deeply unpopular act. There were two Unions to choose from, but even together, no more than 20% of the staff belonged to either. “They just take your subs and cause trouble,” was the usual refrain. Few of them appeared to have the slightest idea why Unions existed; of their history; of the fact that all the rights workers possess (limited at Ottermill, including no pay if you fell ill), were thanks to the Unions. The factory was doomed even then, the Unions having insufficient influence to argue for diversification, while the management, aware of what was pending, studying the job opportunities columns, simply creamed off the diminishing profits by awarding themselves pay rises. The factory closed for good in 2003[ix]. All party-political involvement in the end requires a leap of faith. Not many politicians are likely to keep – or be able to keep – their commitments, and as I proved to myself again while researching this, there are countless angles to every problem, and few in power not liable to compromise or corruption. Regarding Woodhouse Colliery, given that the local authority was warned that it had failed to consider the greenhouse gas emissions of the mining operations, there is still a good chance that a judicial review[x] will overturn the Government’s regressive decision.

It’s obvious that all coal mining should be phased out[xi]. Flooding the market with cheaper coal only hampers the drive to get on with expanding renewables. The Government claims to wish to cut emissions “without seeing them exported elsewhere”.  Yet Woodhouse Colliery, committed to 50 years of extraction, clearly goes against this. Mining coal for export is tantamount to exporting chemical weapons – another serious crime we all know Capitalism encourages.

[i] https://en.wikipedia.org/wiki/Woodhouse_Colliery  According to West Cumbria Mining, the mine located on the former Marchon industrial site just south of Whitehaven, will extract coking coal from under the sea off St. Bee’s Head, “with access via the existing Sandwith Anhydrite mine portals”.

[ii] Farron, Liberal Democrat MP for Westmorland and Lonsdale went on to add that the government should “invest fully in zero-carbon energy” instead. “Cumbria has so many renewable resources to provide energy – water, wind and solar – and we should most definitely not be taking the backwards step of opening a new coalmine.”

[vi] I would agree with Dr Ian Fairlie in the Guardian last year, that Labour’s support for both nuclear weapons and new nuclear power let down their manifesto and must have lost them a lot of votes.

[viii] Ottermill Switchgear: for whom the writing was on the wall even then. Though most of the workers had their eyes tight shut against it, they were being rapidly superseded by Japanese electronic versions of their giant mechanical switches. It was taken over in the 90s, closed in 2003 and unless – since 2015 – it’s been converted into flats or something (?), is now derelict.

View all posts by →
This entry was posted on 22 February, 2020 in homepage and tagged Coal mine protest, Kendal, Lawrence Freiesleben. Bookmark the permalink.