Ken Livingstone, a child of the late 1940’s and 1950’s, grew up in straightened circumstances, just after WWII.  He read us some passages from his new book, Livingstone’s London, illustrating his childhood in Streatham and later Tulse Hill.

It was a world of rationing of food, mend and make do, families often crowded into one or two rooms of a house, an open coal fire for warmth, kitchen facilities by the stair landing, an outside loo, cold water only and a shared bath for all.  Bathhouses, incorporated into the swimming pools established in late Victorian times, were still well used.

The towns and cities were thick with smoke, grit and frequent fog.  There were few washing machines in homes and, relative to income, laundering was expensive. Clothes and curtains were washed by hand and hung up to dry on a pulley, a slatted clothes rail pulled close to the ceiling, usually in the kitchen or eating area.

His world began as the country was led, from 1945, by Clement Attlee’s Labour government which legislated for the new social conscience, building hundreds of thousands of new homes every year, establishing the National Health Service (NHS) and providing greater support for pensions, work, and facilities for community use.  The papers were scathing, said Ken, on the start of the NHS in the late 1940s.  The Daily Express said it would bankrupt the country, catering for ‘congenitally deformed and feckless people’.

Ken approved of the strong support of these social policies from 1951 to 1955 by small c Conservatives and later Labour governments.  Thus, in the mid- 1950’s, his family moved into a new flat where he and his sister, Linda, had rooms of their own.

This was his fifth book, the first to concentrate primarily on family, youth, the emotional and personal, and the joy of living and working in London.  His home in the early 50’s was crowded and there was no TV, so he would find his own entertainment.  He enjoyed reading, particularly science fiction writers such as Heinlein, Asimov, Wyndham & Vonnegut and would often listen to popular radio series such as Journey Into Space by Charles Chilton.  He had and still has an abiding interest in reptilian creatures, such as salamanders and newts, perhaps inspired by his interest in alien life forms.  The atom bomb and fears of annihilation and deformity colouring, perhaps, becoming a teenager in the 1950’s.

At school, there was an Anglican assembly every day, with prayers, announcements and occasional performances.  There were no black faces at his primary school.  He’d sometimes see a black bus conductor.  The 1948 Windrush generation were almost all men, only bringing their wives and children to the UK five or ten years later after settling.

Streatham and Tulse Hill had many parks and bomb sites littered London.  He and his friends were free to go there, walk, take the bus or tube or cycle around London.    They would go, unsupervised, to the ubiquitous swimming pools or play games in the streets (there were few cars) with friends after school, often all day at weekends.

Sex was never talked about at home, or on the radio, rarely on television or in the papers and homosexuality never discussed, ’though the children were taught to steer clear of ‘dirty old men’.

On some Saturdays he would go to the sixpenny, 6d (2.5p) pictures with friends, listen to the organist rising from the pit to entertain before the two or three films shown.  They’d be Cowboys and Indians, superhero, US detective stories such as Eliot Ness, cartoons like Bugs Bunny or Wile E. Coyote and the Road Runner, ‘sinister’ alien stories like The Creature from the Black Lagoon or The Day the Earth Stood Still.

He said we’ve sent dozens of probes to other planets (to communicate with aliens).  There just are two reasons they haven’t communicated with us.  They’ve looked and don’t like what they see or they have already destroyed themselves.

I thought he saw this as a warning for us.

Leaving school with four, he claims, ‘easy’ O levels, English Language and Literature, History and Geography, he started work at Chester Beatty Cancer Research, later completing his teacher training before going into politics in 1968 at the age of 23.

Ken talked about the political upheaval of the Thatcher era from the early 1970’s with the selling of council houses at massive discounts.  The era of strong acquisitive and selfish desires increased as the second world war faded into the distance. Looking out for friends and neighbours (as war had demanded) seemed an almost unwelcome imposition. 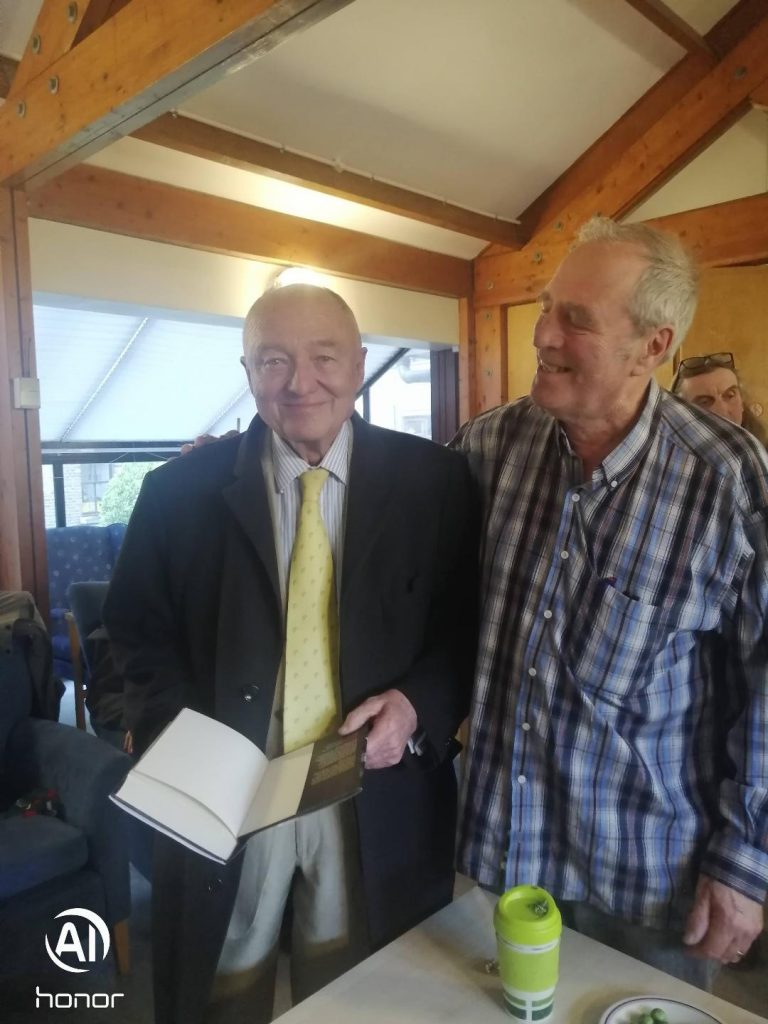 The Greater London Council, which he led from 1981 to 1986 provided grants for many kinds of cultural, minority and LGBT and women’s groups, instruments for schools with the ILEA, and artistic groups increasing funding by 1984 to £50 million yearly. He said this was the glue, the most fundamental root of a happy and connected society.  I said that I was so grateful that he had given support to a housing group I led at the time.  He said he appreciated my thanks, but he was a representative of the people and this, after all, was his job.

He campaigned against the selling of council homes and was able to decrease London transport fares to help ease congestion.  He gave us statistics of the number of museums, theatre, cultural provision which were far in excess of any other European country or the USA.

He was an MP for 14 years from 1987, and was saddened by parliament, horrified by the antediluvian chamber with a barking and noisy mob facing each other in the chamber (the House of Commons), shedding little light to enable useful outcomes. He compared our antagonistic parliament with the many European ones, arranged in a semi-circle, elected more fairly under proportional representation.  Their physical arrangements encouraged co-operation and compromise.

As Mayor of London between 2000 and 2008 he introduced the congestion charge, the Oyster Card, free transport for under 18’s in education and the most police ever for London.  After moving to the ‘glass testicle’ in 2002, the new City Hall opposite the Tower of London, he successfully (eventually) fought the privatisation of the underground, won the 2012 Olympic Games for London, supported multiculturalism with funding for both Jewish and Muslim events and groups.  In 2007 he even apologized for the 3.5 million slaves transported, a bulwark for British industry and commerce, in a triangular trade, for close to 150 years until the early 19th century.

Slavery.  He said we had created an empire which dominated the world and allowed us to take raw materials, exploit markets and provide a comfortable living for the middle and upper classes.  Slaves to ideology.  ‘Rule Britannia’, 1728, by James Thomson, a Scot., ‘Britons never, never, never shall be slaves’.  Robert Livingstone, Kens dad, was a Scot.  Our culture has been built on slavery and war.

We settled Tasmania in 1798, then battled the Tasmanian aborigines between 1820 and 1832, with, in 1929, George Arthur, the Lieutenant-Governor giving a killing bounty of £5 per adult and £2 per child.  Keeping natives in line, imprisoning and killing in India or on the North American continent continued the embedded arrogance and domination of the rich and entitled, still strong in our culture today.

Now, said Ken, our baton of world domination has been passed to the USA.

As you grow up in a life of privilege and comfort, your family owning land & houses, your education at Eton, Harrow or other public schools you often won’t notice the servants bustling around, preparing your food, cleaning your house and caring for you.   In the public arena for most of us we are servants, many on zero hours contracts in universities, catering, hotels and delivery companies and even in the NHS, social care, care homes, and as security guards, and street sweepers.

The privileged people, then and now, predominate in politics, law and journalism and set the agenda, particularly after 1970 from the beginning of the Thatcher era, for a neo-liberal approach to government and social policy, allowing that ‘free market’ , with a diminution of employment rights and a withering of state provision.

Ken said the pay of CEO’s in 1980’s was 16x average wages.  Now it’s an astonishing 160x.  And that work for many of us is more precarious than ever.  Zero hours, just as at the height of the Victorian British Empire.

What chance do many of the young have of secure jobs and of having their own secure homes?  For his children, he’s adding bits to his house.  Then, he said, there’s an added advantage; they can look after him as he gently sinks into senility.

We have a toxic press, run by the very wealthy and billionaires feathering their own nests on the approach of an environmental tsunami.  We need to mend and make do, be mindful of the needs of others, and live simply, as his family did in the 50’s.

We talked about the slogans of politics, ‘not in our name’ and ‘for the many, not the few’ from 1819 by poet Percy Bysshe Shelley’s The Masque of Anarchy, after the Peterloo Massacre on August 16, when 15 were killed and over 700 injured

“Rise like Lions after slumber
In unvanquishable number,
Shake your chains to earth like dew
Which in sleep had fallen on you –
Ye are many – they are few.”

He talked about the elephant in the room; “2.5 billion people when I was born, over 7 billion now.”

He fears for the future with giant corporations increasing production of goods, expansion of robots and artificial intelligence, and the continuing massive extraction and use of raw materials, a small cohort appropriating unheard-of wealth with the rest of the world in relative poverty.

Ken told us of his new life without the stain of political infighting and the needless litany of imaginary ‘truth’, a fruitless battle with, in our times, so many in the fray.

He said ‘we don’t need to participate in this unholy consumption’.  I think now, he might also say we do not need to join in the words of constant opposition to each other, to uninformed ignorance & bigotry and bowing to populism and the populist dictators.

This love of family and community is the glue that binds us; not the constant buying and discarding of material goods or posturing for fame to impress for an instant.

What happens to a man when you try to eat him alive?  Ai Qing, a famous Chinese poet, was sent to a labour camp in 1968 exile for 16 years, forced to clean toilets.

He was the father of Ai Weiwei.

Ken has not endured that purgatory, but throughout his career of 50 years in politics he has been pilloried, excommunicated and often denied a proper hearing. Despite this, his views & actions have changed the debate on environment, social needs, and the healing of cultural and political division.

He is determined to do good and has looked, most of all, for the best in others.

He sat before us intensely, very gracefully, politely and quietly discussing his life of service to us.

A young man of 21 asked Ken for advice for the future.  Ken said find a partner you can share with, get a good education and do the work you love.

Ken has his garden, his long-term partner and wife, Emma, his love of history, and, as a house husband, plenty of time with his children.  He also enjoys the rest of his close family, his other children and his many friends.

Tweet
This entry was posted on 1 February, 2020 in homepage and tagged Christopher, Ken Livingstone. Bookmark the permalink.