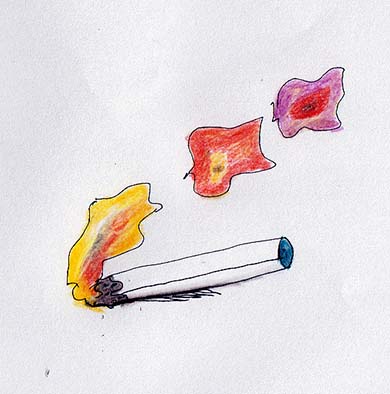 I get my bowl filled with coffee at a local stall and take it back to my room. I place it on the grass mat covering the bed , climb on and tuck in the mosquito net. Taking out a small fragment of grass I crumble and roll it into a paper, the result is very thin since I only want to test its potency. I light up and take a few good pulls. At this point the buzzing from the neon tube becomes unbearable, the place is like a fish and chip shop. I get up, turn it off and light a candle.

The room is illuminated apart from this by a neon in the courtyard outside the window. It is now silent but for the low hum of the fan. I notice that the light from the courtyard passing through the frosted panes of the window creates a perfect illusion of strong moonlight, all it lacks is a spray of bamboo across the glass. The white net billows around me; it is a Bedouin tent, and, as Kumar had predicted trapdoors are opening in my head.

I go over to the window, open it and look down. Far below the Thousand Lights Piazza is thronged with night life, Mushie sellers cry their wares and late shoppers rub shoulders with theatregoers bent upon an early dinner before the show. Across the sea of twinkling lights an occasional torch rises fiercely towards the stars from the spaceport on the outskirts of the city.

I look out across the park, Tassle will be waiting for me. I climb onto the low balustrade outside the window and leaning forward launch myself out. The movement arouses a few roosting birds which flap around me shrieking as I head for the park.

I pass only a few other fliers and stay low to avoid recognition. The moonlight is intense. Crossing the park boundary I look down and see the trees below as pools of blackness on a silver ground. The place I am heading for is a deserted and overgrown area unfrequented even by day.

A derelict fountain is at its centre which Tassle and I have been using as a trysting place and now I see it below, a faint whitish blur in the darkness among the trees. I come down silently and approach the fountain, its huge marble bowl now filled with the leaves of several autumns.

Tassle is standing with her back to me, leaning gracefully against the fountain. I call softly to her and she turns; there is a strange look in her eyes and she is holding something in her arms. As I come closer I see that it is round and softly glowing with a faint pulse. I hold out my arms and she passes it to me. I notice that it has several appendages pointing like antenna outward from its centre. Examining it more closely I see that is not, as I had first thought, a solid sphere, but seems to be an arrangement of shimmering points of blue light connected by thin filaments of silver wire. The appendages, extending through the axis of the sphere, intercept as they do so the points of light.

‘Listen to it.’ Tassle speaks for the first time.

I put my head closer and am astonished, for as my ear enters the vector between two of the appendages it is immediately as if I am seeing sound.

In the enormous distance hangs a globular cluster of tones. Hovering together their pitches oscillate faintly, brightening and fading as the wavelengths coincide and depart. At intermediate intervals there appear other tones, some speeding across my field of view and gone like darting comets in a flash. Others smaller, move together in languid shoals. I see thousands upon thousands of minute and tiny sounds, each so small as to be undetectable. Now gathered together in a vast cloud they generate a deep bass hum. Out in the far, far distance I detect other faint sources, but I am able it seems to attune myself to any of these points.

I focus upon one such source, a large and very distant sonic mass whose peculiar on-off pattern has been interesting me for some time. There is a sudden wrench… I am momentarily confused, I open my eyes to see Tassle standing before me, she has pulled the device from my hands. She laughs. ‘There are sixty-three other ways to view,’ she says. ‘That was only one of them.’

I am very, very interested. In fact I have already decided that I must have one of these instruments and tell her so. She laughs again.

‘There are only two others known to exist, they come from so far away that knowledge of their origin does not survive the journey.’

Now it is my turn to laugh, does she seriously think I will exchange my precious World Opener for a toy? Then I remember that distant sonic sun, the remote constellations singing to me along the neurone paths of memory and I know I must again enter that world at any cost. Reluctantly I take out my World Opener and silently pass it to her. I will return to my room and explore the infinite possibilities of the device. But before I can claim my purchase, she steps back and activates the Opener, cutting sideways between my left side and a nearby tree. Then, before I realise what she is about, she cuts a swift loop around me and reconnects the edges from her side, excluding me from the world in the process…

I am sitting on by bed; it is hours later, the candle has burned almost out. I look down; in the ashtray my joint of grass lies there, forgotten…

I blow out the candle and retire.

View all posts by David →
This entry was posted on 30 October, 2014 in homepage and tagged dave tomlin, grass high, Indian trip, nick victor. Bookmark the permalink.