Kill the Bill – A protest in Kendal

Posted on 10 April, 2021 by Lawrence Freiesleben

Yesterday, in perfect Spring weather, my eldest daughter and I walked from Brigsteer over Scout Scar and its illuminated limestone heath, down into the centre of Kendal. We were heading for local landmark, the Birdcage, to attend the first of a series of events taking place nationwide, which aim to raise public awareness of the perilously undemocratic, anti-protest, policing Bill[i]. Like many other highly dubious proposals (such as those regarding the Law of Trespass[ii] – which would benefit no one but rich landowners and government hangers-on), this one is being sneaked through using the cloaking device of covid. 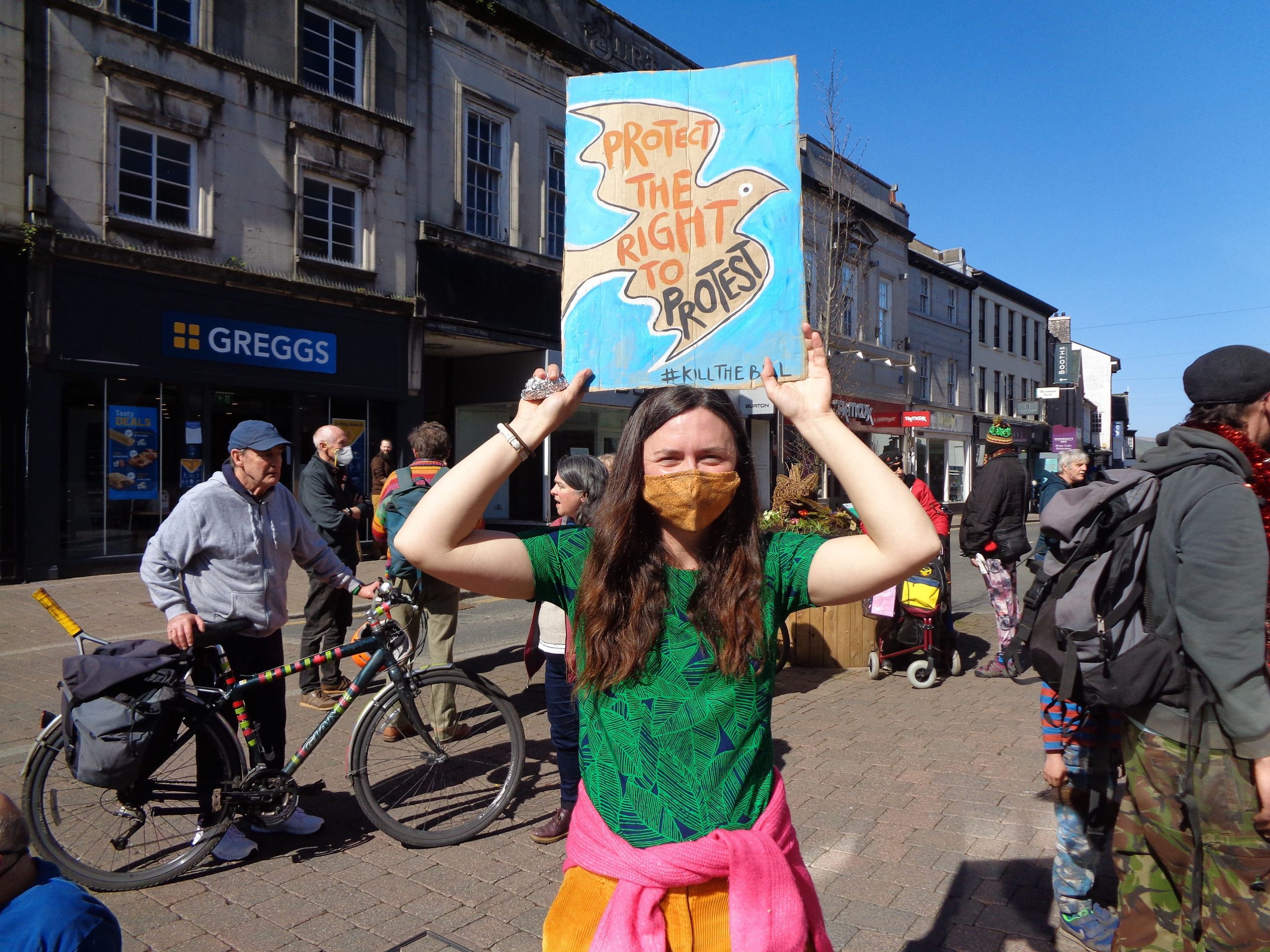 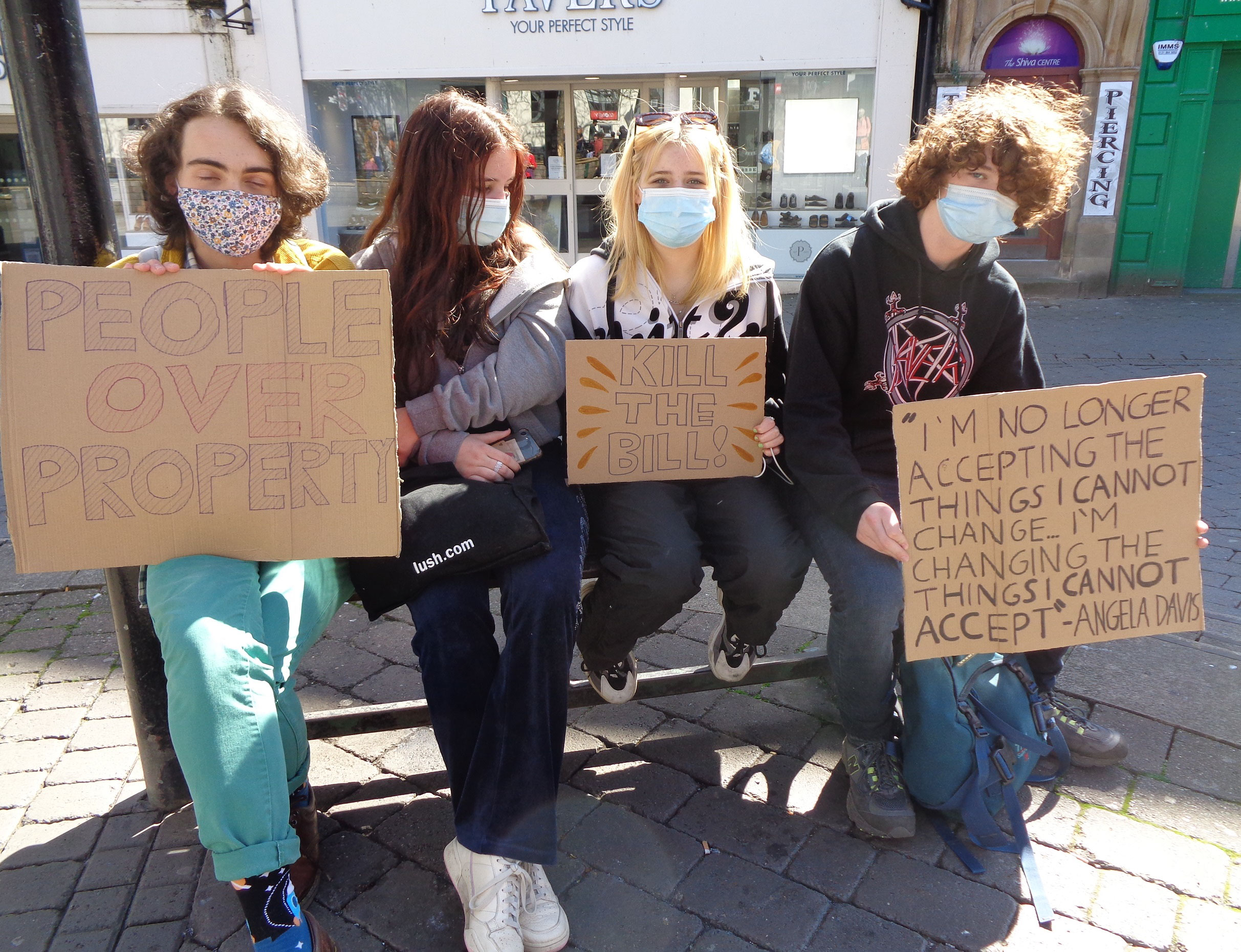 Compared to sunny Saturdays in the past, Kendal remains a relative ghost town. Yet gathered around the Birdcage, we were pleased to find not only the enthusiastic music of local band, Vacant Weekend Project and plenty of friends not seen for some time, but also scores of fresh faces – or eyes at least – and colourful placards. As facemasks complicate recognition, so for a moment, I did not realise that the first speaker was newly bearded local MP, Tim Farron. Full of praise for everyone who’d made the effort to come, he set out the Liberal Democrat’s objections to this noxious Bill. Every speaker who followed, offered a different angle, but all adamantly agreed that if passed, it would become the thin end of a very dangerous wedge. A slide towards totalitarianism. 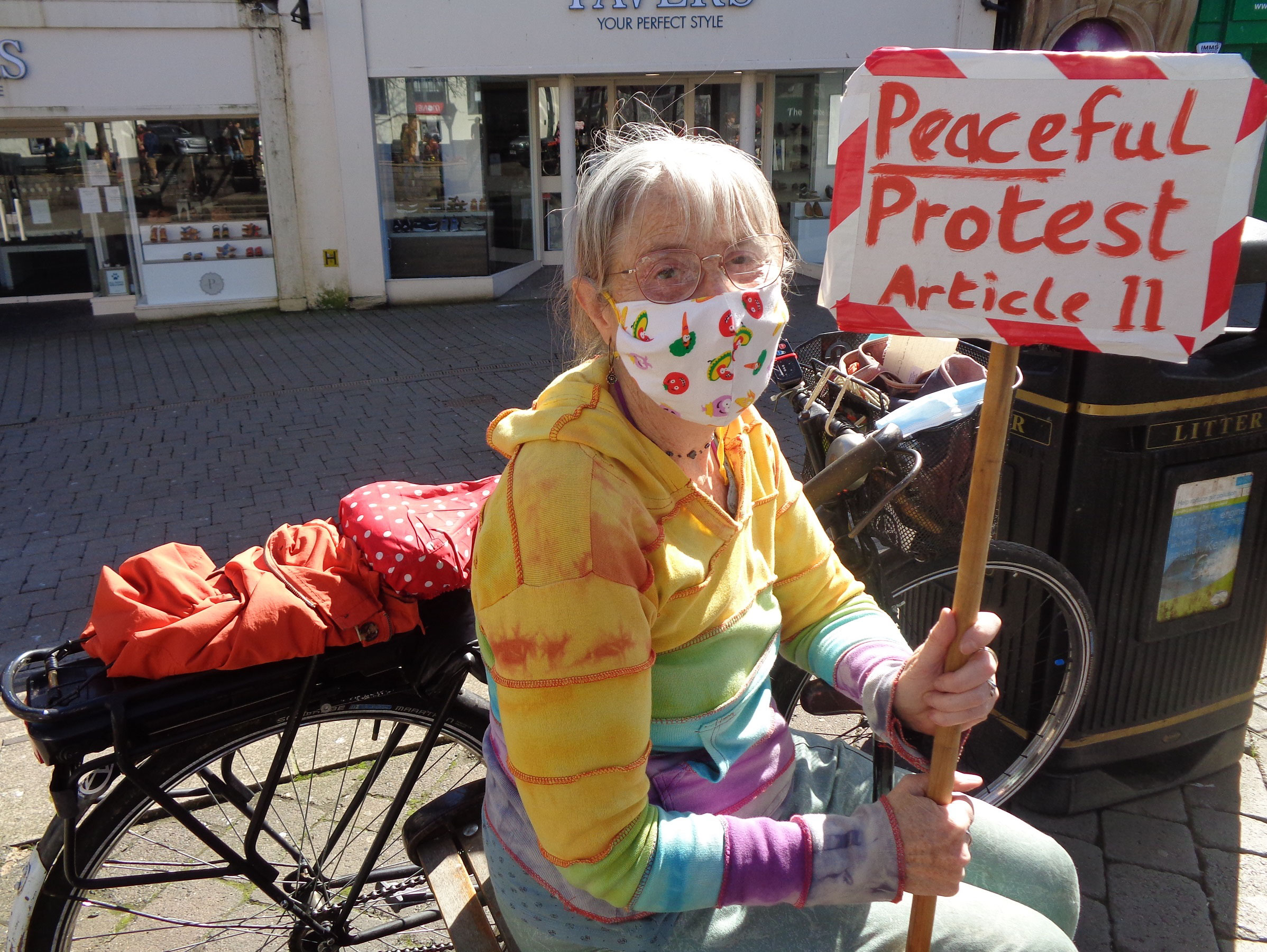 Article 11[iii] of the Human Rights act, paragraph 1, stipulates that: “Everyone has the right to freedom of peaceful assembly and to freedom of association with others, including the right to form and to join trade unions for the protection of his (sic) interests.” Of course, we are all aware that the current government – like all Tory governments for at least the last forty-two years – doesn’t give a stuff for rights and freedoms except for those of its friends and relatives. 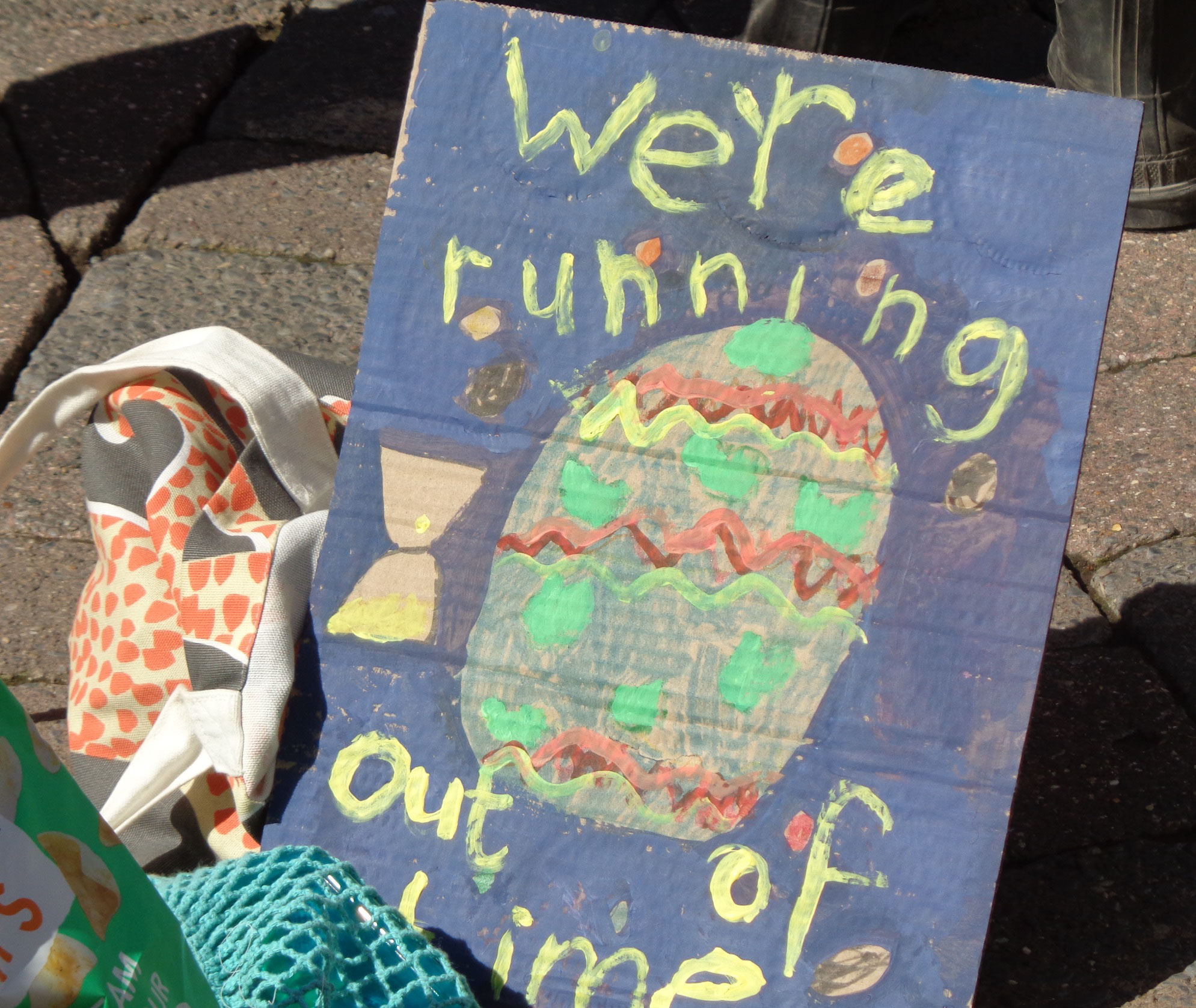 The obvious motive behind the anti-protest Bill is to enable government to use the police to suppress the effective activities of essential groups such as CND, Extinction Rebellion and Greenpeace. In the Guardian article referred to above[iv] the Metropolitan police claimed that the “April uprising” cost them more than £16m. Whether or not this figure is accurate, none of it would be necessary if the government actually grasped the nettle of the climate crisis. It’s not the protestors, but governmental and institutional inaction which is to blame for such unnecessary expenditure. The protestors are just trying to wake everyone from their consumer sleep. In the end, neither any government nor any citizen will have the choice but to tackle the climate crisis, so why do we dither so uselessly? As for unnecessary expenditure in times of economic collapse, while offering nurses a mere 1% pay rise[v], the government are set to spend £205 billion[vi] replacing the UK’s nuclear weapons, increasing the number of them by 40%[vii] – an insane move which contravenes international law. But what can we expect from a jingoistic gang who want to feel big in their platform boots? 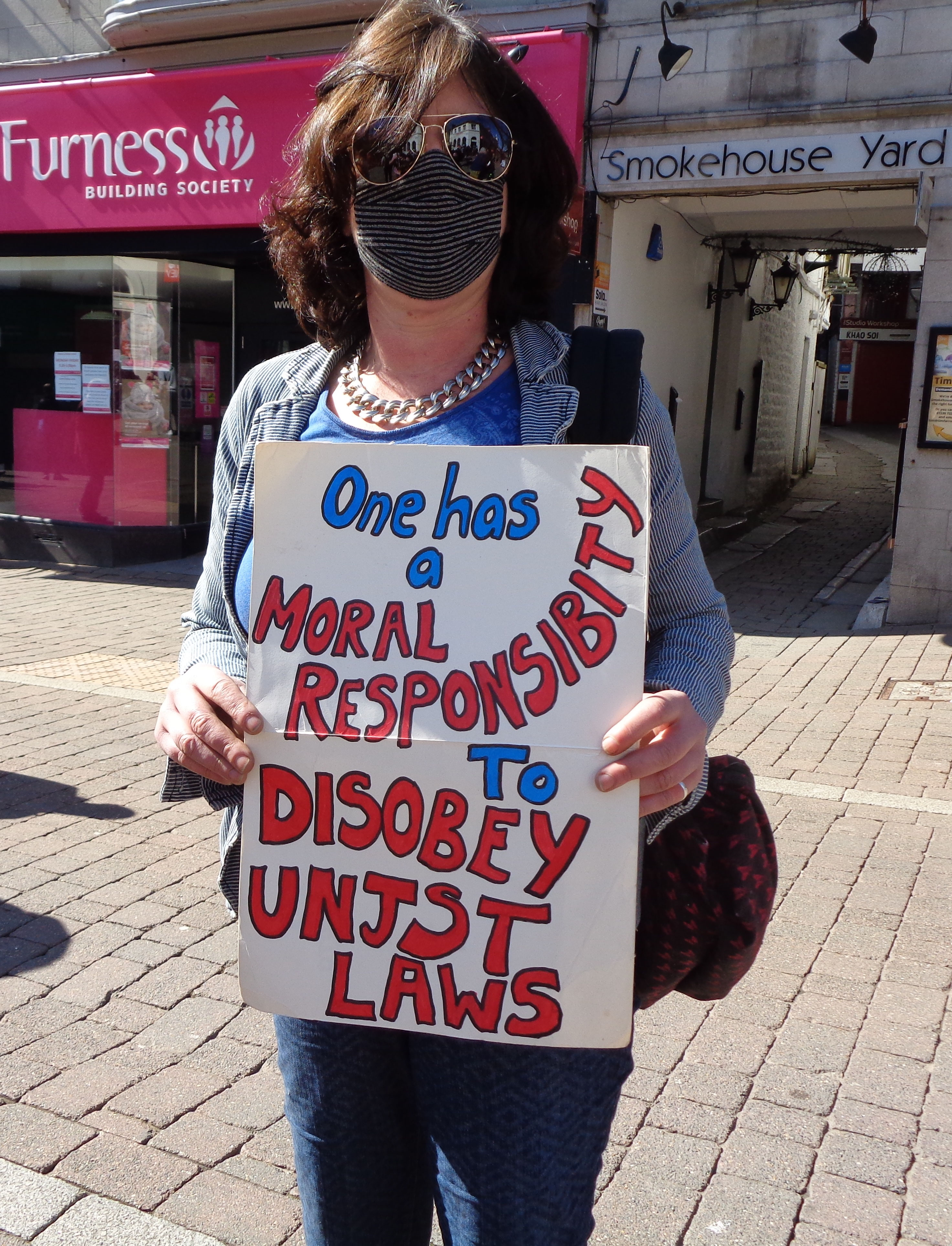 One of the placards at Kendal perfectly captures my own position: One has a Moral Responsibility to Disobey Unjust Laws. Should the latest of our clueless government’s follies become law, I personally doubt few will take much notice. Am I just being optimistic? This government is so out of touch with all but themselves and a handful of cronies, they haven’t realised how much more of a national and global laughingstock they will become. They are sitting on a shingle beach up to their knees in a rising tide[viii]. Rightful protestors will ignore it; all but the most fanatical police, avoid imposing it; and judges throw out prosecutions brought under it. 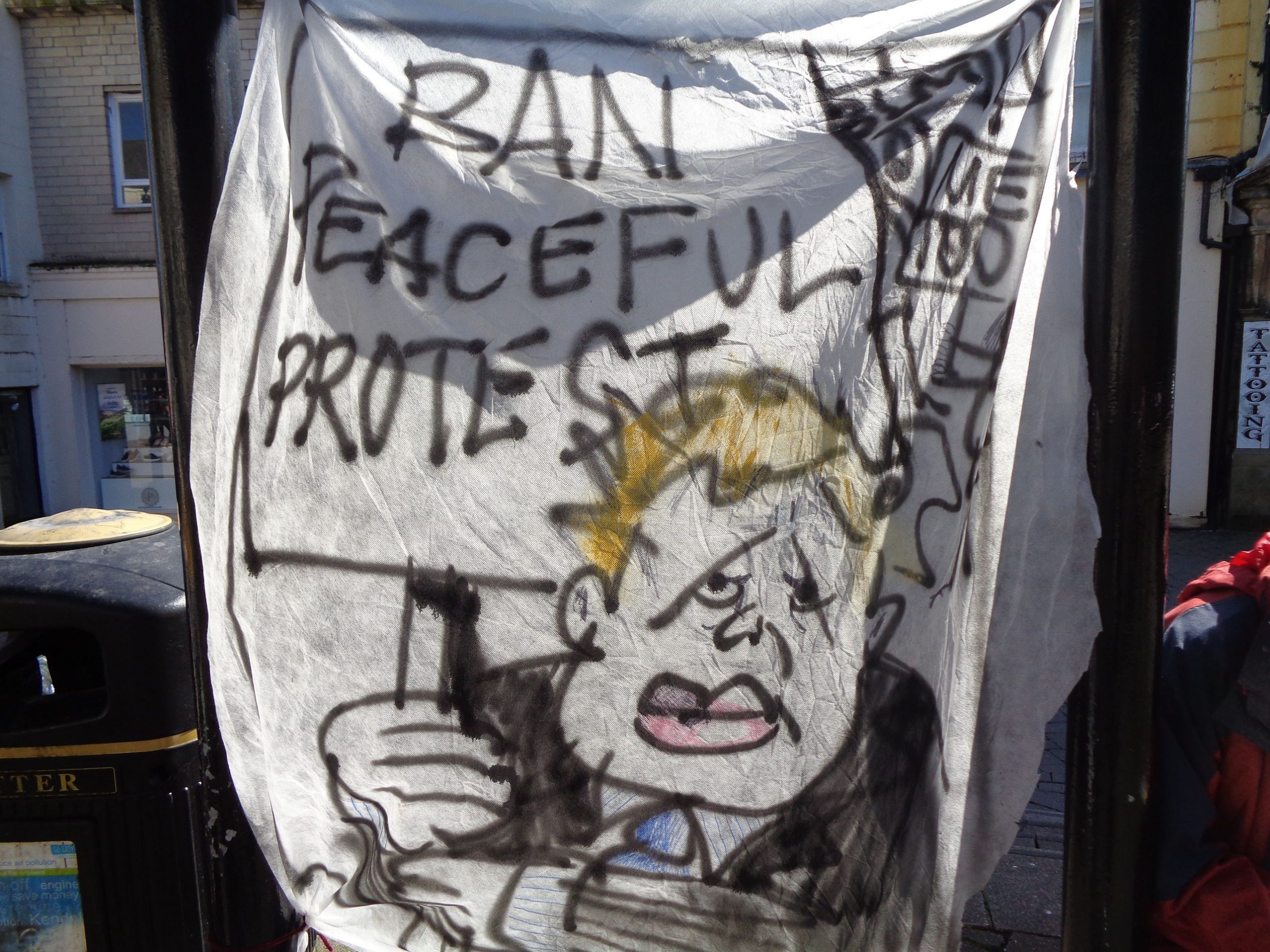 Occasionally I try to spare a thought for the small minority who wasted their vote on Binside Boris and his inner ring. What acute embarrassment such voters must feel for such a pathetic crew, for the zombies and parasites of his chumocracy[ix]. To quote Jolyon Maugham, Director of Good Law Project[x]: “In every corner of public life the Tories are or look to be bending the resources of the state to their own private advantage.”  In the last year, thanks to lockdown pressure and economic collapse, almost everyone has not only (perhaps understandably) taken their eye off the ball but forgotten it altogether. If we are lazy enough to let a Bill like this become law and then spineless enough to obey it, we’ll deserve the disastrous future we will have summoned. 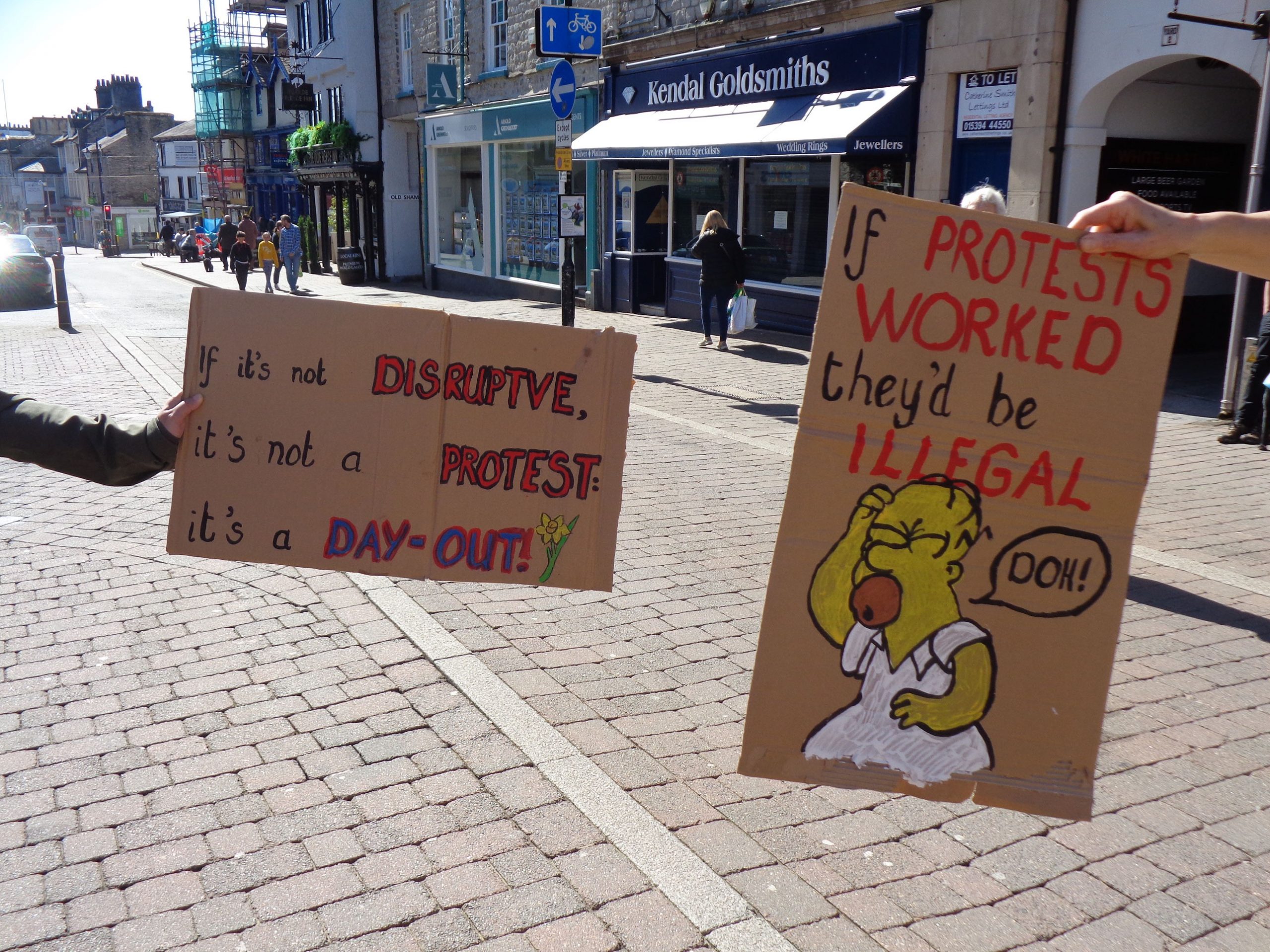 Quite a few of the speakers urged the use of social media to spread the demonstration’s message as widely as possible. Personally, I’m not a user, but as with the internet[xi], employed wisely, social media can obviously be a very effective tool. That groups such as Extinction Rebellion, Amnesty International, Black Lives Matter and CND are our conscience, needs to be widely appreciated. 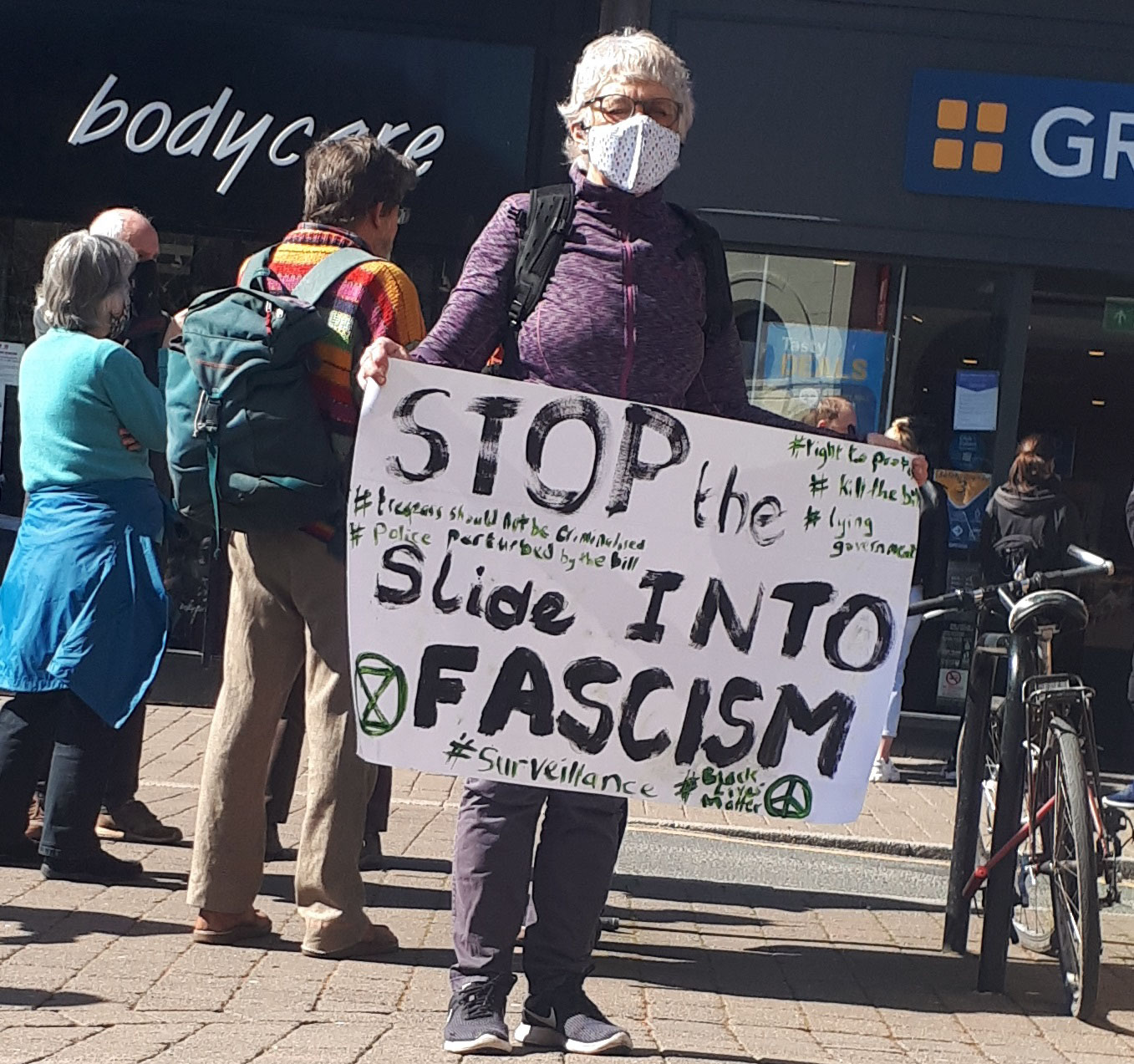 I’m not a great believer in conspiracy theories, but there’s no doubt that the farce of Brexit combined with the emotional blackmail of covid, have given that clique of lobotomised vampires who prey on us, ideal opportunity to tunnel under what remnants of democracy they barely pretend to respect; to smuggle through legislation which underlyingly supports their racist[xii] and fascist attitude; legislation aimed as always, to aid the rich at the expense of the poor.

The route to and from Kendal: 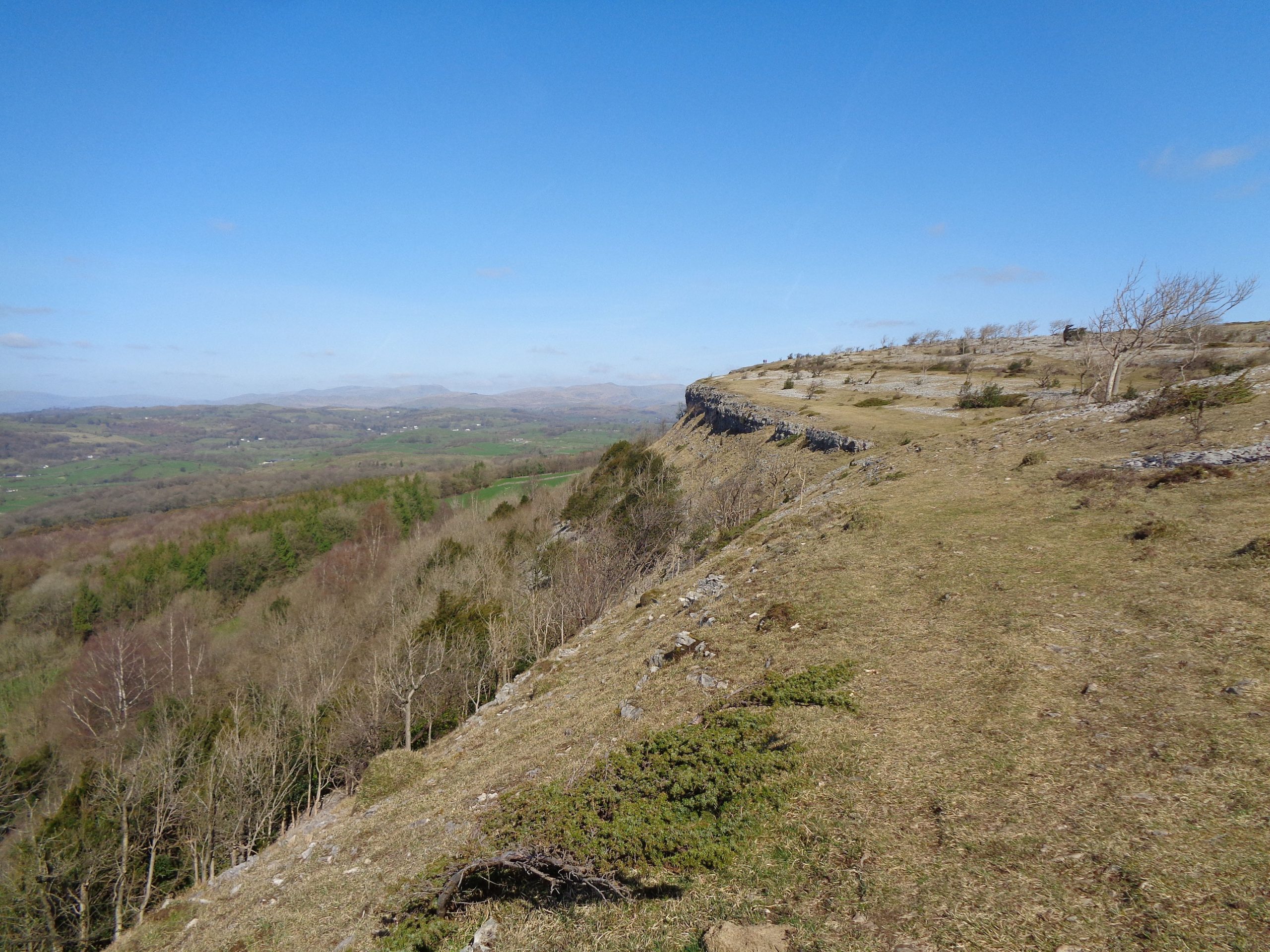 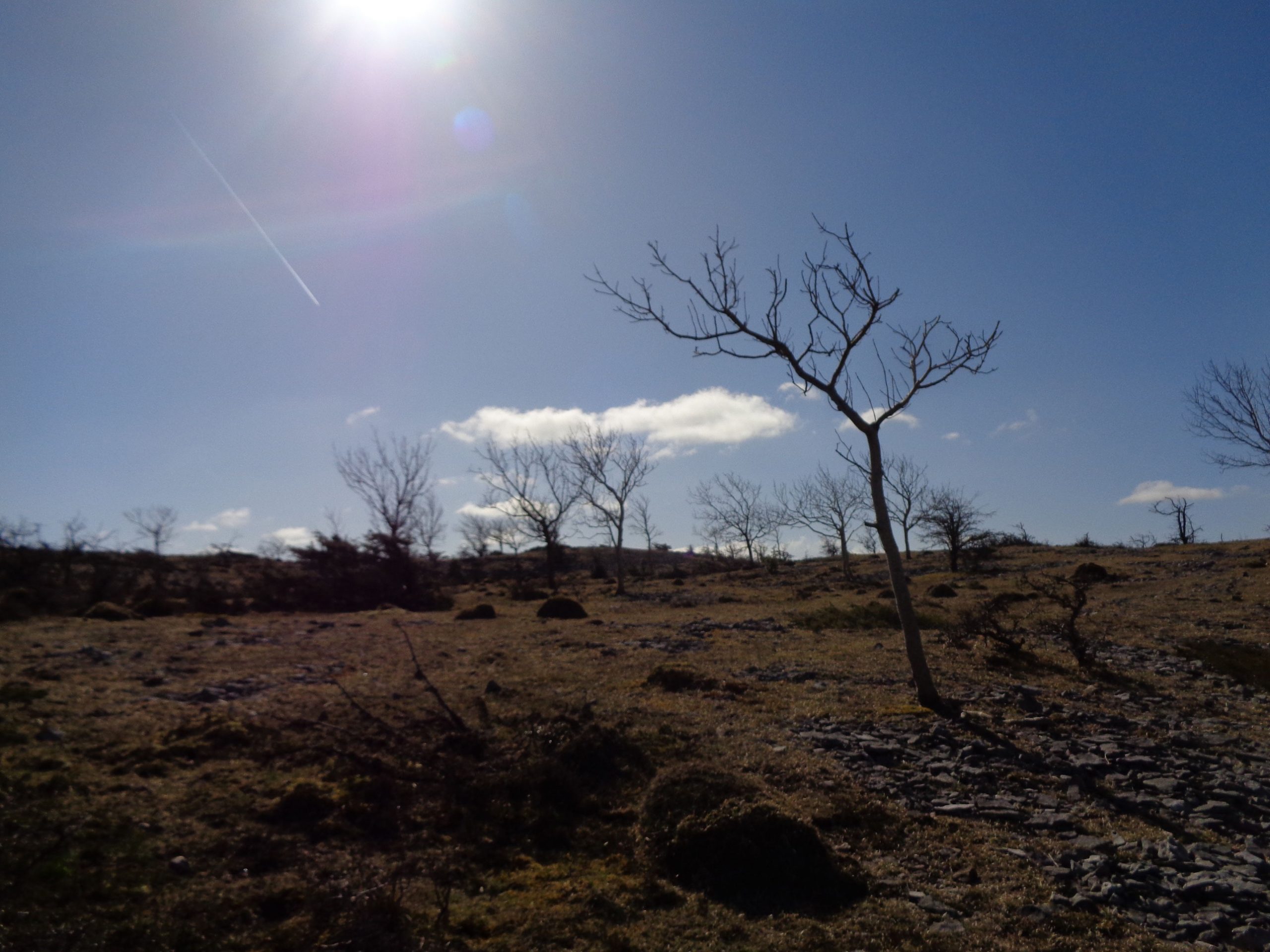 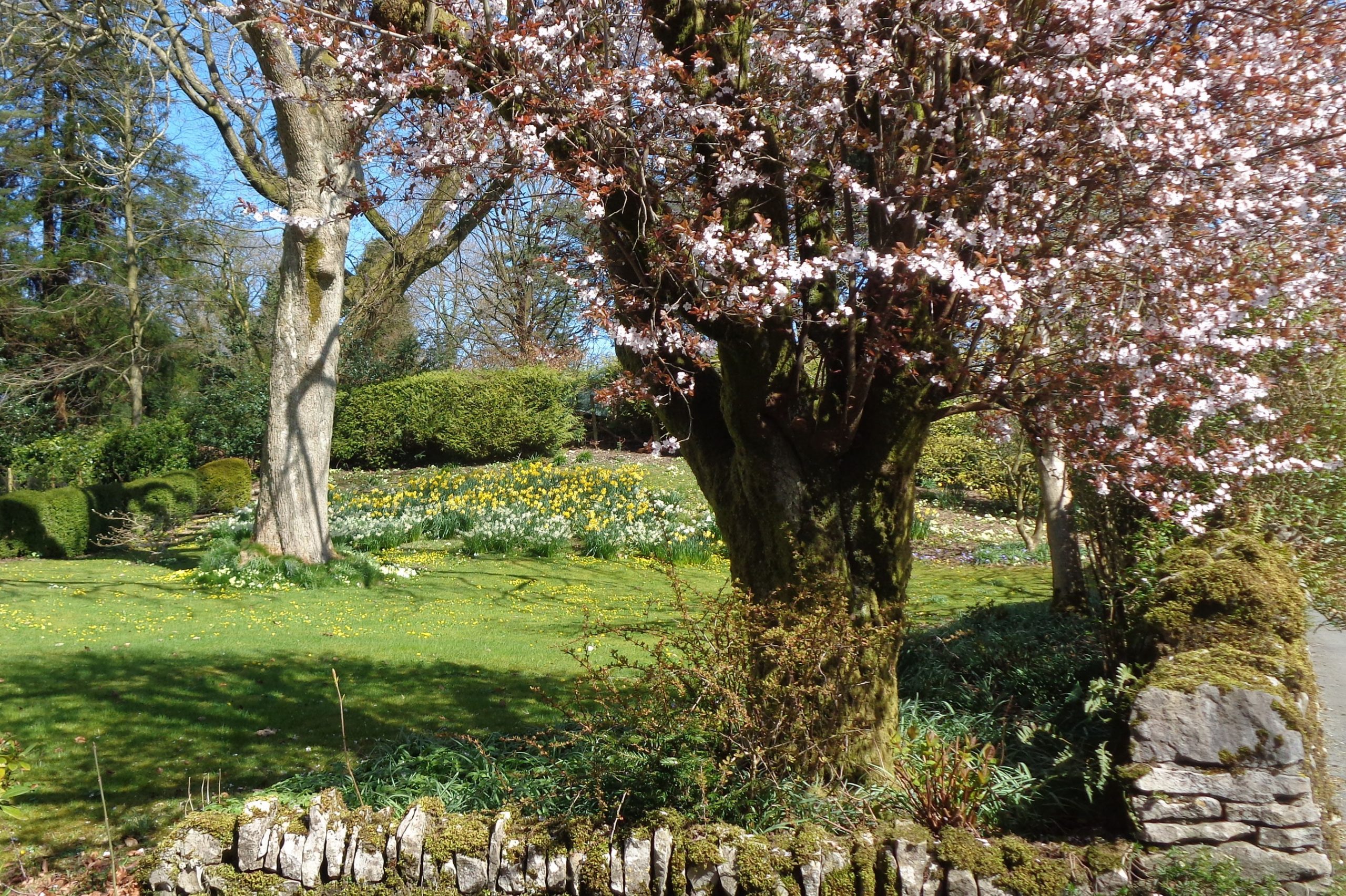 [viii] A rising tide of crosscurrents they are either too narrow-minded or dim-witted to understand.

[xi] The following day, a quick internet cure for a plumbing airlock slightly improved my attitude towards those water-wasting fashion items: mixer taps. Instead of needing a piece of hose to short circuit and blast air from the system using the rising main, all you need is a hand across the joint tap outlet or thumb over the end. Even mixer taps have their uses!

View all posts by →
This entry was posted on 10 April, 2021 in homepage and tagged Cumbria, Kill the Bill, Lawrence Freiesleben. Bookmark the permalink.

One Response to Kill the Bill – A protest in Kendal