Kirsten Reynolds: The Elegance of the Maverick

“In the middle of the journey of life,
I came to myself within a dark wood” (Dante)

Waking in the night I sometimes wonder if Kirsten Reynolds is in a wood somewhere or by a lake. Alone, dressed in black, melting into the shadows, she is setting up her time-lapse camera, putting her coloured light wands to hand, sensitising herself to the energies, sounds and mysterious ambience of the place. Forget tree hugging and dancing with elves. What happens on such nights is physical philosophy.

The photographs she takes are records of her brief journeys as she weaves skeins of light before the lens, sometimes white, sometimes coloured. Her trajectory leaves traces which form shapes shifting from transparent, through opaque to sinuous lines with the tensile precision of steel.

Sometimes the landscape is barely discernible, just a dense tactile space, at other times the forms drift over recognisable terrain like mist that is impossibly articulated, or a bolt of fine silk, each fold of which is impossibly crystalline, or a transparent titanium sculpture. It looks like an extraordinary natural event, like the aurora borealis, or freak electrical activity. 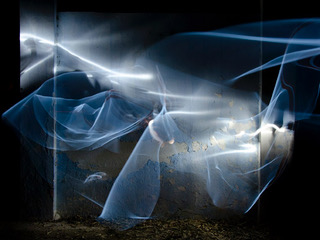 Of course it’s all an illusion. The shape has an illusory concreteness created by the passage of time. If you were there, you wouldn’t see it. That’s the point. Kirsten is fascinated by the idea of recording something which didn’t actually happen, not in that form. Yet it is a genuine record of energy and movement, and so, at the same time, not an illusion at all,  but a very clear exposition of intent and process.

For this is no slick device to modernise the genre by slicing a rural landscape with urban neon light. There’s nothing whimsical or clichéd, but an endless improvisation informed by rhythm, pace and tempo.The forms are eerily beautiful and tough, despite their fluid insubstantiality. Often they express an immense force, like the manifestation of an elemental spirit, rising up and tearing a way through space. 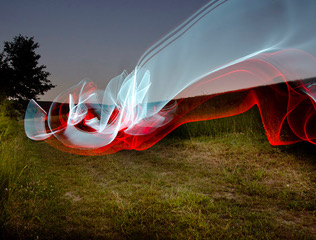 Kirsten thinks of it as “non-verbal drawing”: the expression of thought and experience before they reach articulation in words. There is certainly a subtle intuitive relationship going on between Kirsten’s attunement to the place, the materials she works with and her understanding of the process. It’s also a rapprochement of sense and sensibility with happenstance, whose outcome must be elusive.   As such, the very fluidity and transmutability of forms is pertinent and is a result of a refined balance between intention and allowing the light to behave as it will. What she is recording is in part her openness to the moment, the atmosphere, the energies of the place, the qualities of light, as opposed to manipulating a set of learned skills with a specific end in view.

She has a strong sense of this being a peculiarly feminine approach in its essential relaxation of the need for control. Compare, for example, the work of Kurt Schwitters, who is also concerned with the re-visoning of space, but whose dislocations are supremely controlled and directed. Her work is in part a response to his, especially as she found, when working in Molde, in Norway, near Trondheim, that she was staying close to Hjertøya where he was exiled during the war. She worked on the coast near Molde for a week, and at Hjertøya, at the invitation of the Maerz Contemporary Art Agency, whom she had met in Berlin.

‘The Illusion of Democracy’, (her latest show) is a title which occurred to her two years ago, and now, of course, seems prescient. “Phrases like ‘ The will of the people’, persuade people that they still have a will , when they haven’t.” She said.”Democracy doesn’t disappear overnight. The description of its destruction set out so clearly in ‘The Road to Wigan Pier’ is only visible in retrospect. Freedoms are eroded by invisibly small steps – the freedom not to process your own purchases in the supermarket, the freedom not to share your address with an unspecified number of organisations. Once these are gone, it becomes hard to imagine a world where they were taken for granted.”

She is finely attuned to the political and philosophical conditions of our time. Many certainties are being eroded. Science is less of an all embracing panacea, political knowledge is becoming less easy to grasp in any but a partial way, our sense of reality is ever shifting in more extreme ways. Human rights need to be fought for all over again. So, her elusive forms reflect the insecurity of our times, and by letting go the need for labelling and control, (a more usual response to instability) she makes a coherence out of variable reality. 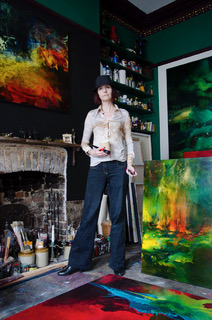 Kirsten Reynolds in her studio

The paintings are a new departure. She wanted to convey in paint what was happening in the photographs: a sense of process in which the outcome is not defined beforehand. Some are like the essence of landscape, where form is minimal. Others though, look like a further stage of dissolution.  They don’t express an aggressive sense of destruction, but are gorgeously, sensually molten and cataclysmic with shreds of landscape whose shape eludes you on close examination.

She was hooked into leaving London for Hastings when a one off gig with Faust, the German Krautrock band, left her needing somewhere to stay. She ended up in a ballroom containing a bed and a grand piano on the fifth floor in Palace Court. “Glorious and grim”. It became her studio.

An austerely elegant figure, familiar to many in St Leonards with her characteristic “trilbyesque” hat, she’s a disciplined maverick in style. Often seen returning from her allotment, or from a gig with the Blood Tub Orchestra, (she’s a drummer, hence her sense of rhythm); she’s well read, with a mercurial sense of humour, and extremely articulate. Her rooms are rich with textiles and books. “Great entertainment, perfect insulation, and you can always burn them if things get really tough! It’s win win really!” These aren’t incidental qualities, they are part of her integrity, the way her life and art are coherent and the way in which she balances intellectual distance with a depth of connection and engagement.

‘The Illusion of Democracy’ show is at Lucy Bell 21st March – 29th April.

Tweet
This entry was posted on 11 May, 2017 in homepage and tagged Kirsten Reynolds, Lucy Bell Gallery, Simone Witney. Bookmark the permalink.

One Response to Kirsten Reynolds: The Elegance of the Maverick