“Leave it to me, Sunshine” 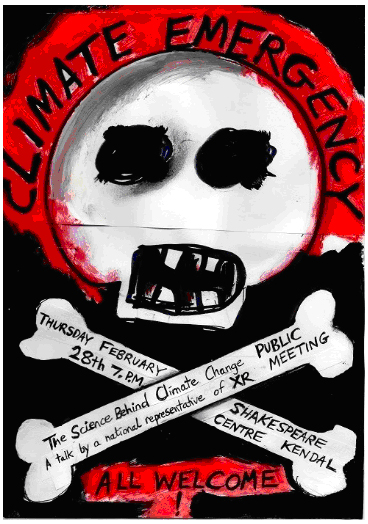 “Leave it to me, Sunshine!” may never have actually been spoken by Jack Reagan of the Sweeney, before he proceeded to kick down some miscreant’s door; but for anyone with a memory of such scenes, the words can hardly be mistaken for the gentle endorsements of a solar panel salesman. Rather they’ve become – if time-tempered by humour – a prelude to violence: violence against doors if not against people.

How differently each of us perceives violence, was one of the early questions asked last Sunday in Kendal, where the South Lakes Extinction Rebellion Group, hosted a Non-Violent, Direct-Action, training day.

The turnout was good, the age-range wide – from students to pensioners: though I’d guess the majority were between 50 and 60?

Regardless of the potential chaos of XR’s non-authoritative ethos, impressively, our training day, as well as practical role-playing exercises, managed to incorporate numerous digressions into moral and legal issues as well as a delicious cooked lunch, yet still ran to time. Not an easy task in a crowded hall hampered by poor acoustics.

Guided by Joel and Kyle, young, enthusiastic, national representatives of XR, the day began by reminding us – lest there was any chance of forgetting – why we were here: the disastrous situation; the negative facts and figures escalating. Not nearly enough is being done – that much is frustratingly obvious. Even without the folly of Brexit (rather than heads-in-the-sand isolation, surely, we need all the connection we can get?), most of the media would still be wallowing in celebrity scandal, sport or trivia. Meanwhile our current ‘government’, always a poor joke in bad taste, stumbles on like a maudlin, terminal, drug addict. Someone needs to commandeer all their single-malt for redistribution. Though preferably not Jack Reagan.

That it may already be too late for humanity, was a fear many people visibly shared that overcast Sunday. When, at a later point in the afternoon, we indicated our agreement with the anxieties of individuals, by moving from the large circle of our chairs towards their imaginary axle point, the voicing of this particular worry, created a tight knot in the centre of the room.

A knot that contradicted the result of our first exercise:

Intended to introduce about forty people, many of whom had never met before, groups of eight or so were asked to form circles – randomly taking hold of two other hands or wrists. Without letting go, we had to see if this knot could be untangled. Ours looked impossible. But to our amazement, despite aged, aching limbs or heavy walking boots, by patient mutual persistence it was, eventually, untangled. Not that anyone took too much encouragement from this – despite the humour that one member of the circle, Liz, was somehow facing outwards. The crisis of climate emergency and the blithely suicidal tendency of humanity is far more twisted; our consumerist habits, a matted confusion of selfish carelessness. Our world is a mess, and our controls set for destruction – the auto-pilot resistant to every striving influence. That Ring a Ring o’ Roses may only connect with bubonic plague in urban legend, didn’t stop me feeling when we stood in a ring at the end, some doom-laden overlap with the current global situation.

Joel was the more experienced of the speakers and obviously used to dealing with varied groups of XR volunteers. His softly spoken colleague Kyle was acting as back-up for the very first time and visibly gained confidence as the day went on, despite being interrupted and being asked to speak “LOUDER AND MORE CLEARLY” by several members keen not to miss a word. The situation of Joel and Kyle was not one I envied – all the more so after another exercise amply displayed how easy it is, even in moments of simulated stress, to literally forget everything useful in your head.

This was during one of the exercises in which the group divided into two lines to represent peaceful demonstrators versus, a) an irate public, and b) the police.

I don’t know if the ‘opponent’ opposite me, was an actor famed for local or national dramatics, but his angry desire to get to an imaginary job and later his pathetic pleas to be allowed to gain access to his ailing hospitalised wife, were so convincing that I couldn’t help but laugh. Attempting (badly) to fulfil my role as activist, I tried to take refuge in gently explaining the demonstration’s purpose – that we were protesting “for the sake of everyone. For the future. For our children,” and so on – all very easy theoretically while able to access the facts and figures . . . In practice, most of these arguments went out of my head and though some friends might think of me as a talker with a tendency to dominate conversations, I literally couldn’t remember what to say.

Far more effective was the woman opposite me, when next I became a police officer: However much I “Please Madam-ed!” her, she just smiled and beamed. Again, it was hard not to laugh.

Joel next became a demonstrator to show how much harder it is for the police to move those who can manage to remain floppy rather than becoming rigid. Naturally enough, it’s harder still to move protestors whose arms are linked. I asked if he knew of any instances of the police tickling people to get them to desist. He laughed, and we assumed such levity would be beneath both protocol or dignity.

Another XR member with a friend in the police force, passed on this friend’s insider view of how frightening it can be to suddenly be called on to ‘police’ a demonstration.

Thankfully, few of the police nowadays, resemble those I remember from demonstrations in the 70’s and early eighties. Very few are like the notorious SPG[i] using unauthorized weapons to disperse protesters. In fact, almost every policeman I have personally encountered in the last thirty years has been respectful and friendly. Which is the whole point about XR and non-violence. XR is trying to speak for all of us, and doesn’t wish to make enemies of anyone. To quote a recent report on the traffic block in Sheffield (19th March), in Newsletter #17 – Paint the Streets:[ii] “The Police were marvellous, supportive and protective.”

On the other hand, Joel’s experience of arrest (it’s happened to him three times) was more sobering to a claustrophobic, than other first-hand accounts I’ve heard. XR generally advise giving only your name and date of birth, although a new law now states that you must disclose your nationality – an insidious development perhaps connected to Brexit and all the threats we’ve been hearing about martial law? Not that one can blame the police for the follies of the ‘government’.

As with the military, a sense of unity or invincibility has long been a principle of more extreme forms of policing – an appearance of being inhuman or robotic, their ideal. One wonders how society might have developed if all this warring, macho, colonial bullying type stuff could have been avoided. Whether the human race could have gone in an entirely better direction? Yet no doubt cavemen practised cruder versions of similar intimidation, and only the most mindless guard dog is not checked if you suddenly appear to double in size by opening your coat. In a sense, XR is saying that all such tactics need to be defused and resisted. It is us as a race, of whatever colour or creed, that XR seeks to preserve. The question I can’t help asking is: do we deserve another chance?

Back in January, the inauguration of the South Lakes XR group, felt like a great day, felt like the beginning of this chance, but was sadly marred a few weeks later when one of its prime movers, Andy Mason, died. I only knew him for a few hours during and after that first meeting, yet already thought of him as a friend. When the steering of my 55-year-old car broke as I was setting off for home, Andy, was as helpful to me as if we’d known each since childhood. When it was obvious that the car was beyond safe temporary repair, he and his wife of more than 46 years, Maggie, took me back to their home while I awaited a tow truck. Later he insisted on standing with me by the car to be sure I would not somehow be abandoned at the roadside. More than the act of a good Samaritan, his reassuring presence was something I’ll never forget. Key to so many local progressive causes, Andy’s burning desire was to see a fairer world and a more sustainable society.

Pleased to see Maggie at the training day, tentatively I asked how she’d been. Her reply was: “When you’re fighting a war you don’t stop just because the comrade next to you falls. You have to keep going.” Which is the best tribute I can think of to both of them.

Afterword:   This morning, near the end of writing this report, a friend in York drew my attention to George Monbiot’s article in today’s Guardian[iii], (see links below) honouring Polly Higgins – a campaigning lawyer who reminds any of us who have become cynical about the misuse of law by powerful corporations, of the better purposes to which it can be comprehensively put. For many years her aim has been to make Ecocide a crime. If you have the time, read the article and watch her talk – to which the article provides a link.

Better still, join the Rebellion in London on the 15th of April[iv].

[iii] The destruction of the Earth is a crime. It should be prosecuted | George Monbiot

On the legal side, you might want to find out what it might mean for you, personally, to get arrested/convicted. You need to decide what is the right course for you, bearing in mind what is at stake for our planet; also remember that many actions carry a low risk of arrest and that there are many other ways to make your contribution.

https://www.risingup.org.uk/nvda-handouts has links to many more documents, including ‘action templates’ with lots of ideas for different types of action.

Tweet
This entry was posted on 6 April, 2019 in homepage and tagged Lawrence Freiesleben. Bookmark the permalink.

2 Responses to “Leave it to me, Sunshine”