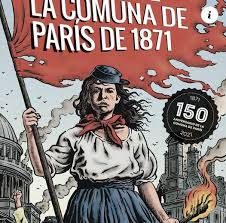 Paris Commune – a revolution of more than its own time

A revolutionary tradition has always been strong in France. “From childhood,” wrote Eugene Varlin, a member of the 1st International, “people are brought up having revolution glorified … boys who cannot work out their own pay, who do not read newspapers, rush out as soon as there is any disturbance in the street.” This applies to Parisians most of all who are still proud that they destroyed the Bastille in 1789, leading to the execution of King Louis XIV.

When war broke out between France and Germany in 1870, The International Workingmen’s Association called for a General Strike against the war in all countries of Europe. It was just a hope as workers were gripped by patriotic fervour while Emperor Napoleon III was half-hearted in his attempt to check a German advance. On 9 August 1870, a large crowd gathered in the Place de la Concorde to demand the Emperor’s abdication and the arming of the people.

The defence of Paris now lay with the National Guard, the armed militia which had sprung up after the fall of the Bastille. Their allegiance was to the people rather than the State and the government was more frightened of  the people than they were of the German army. One minister said that there is a fear that “the agitators would use their arms more for social upheaval than for national defence”. With Paris under siege from the Prussian army, by the end of the year, 300,000 Parisians were under arms.

The government proceeded to to make peace as soon as possible and on 3 September 1870 the French army surrendered to the Germans at Sedan. The Republic was declared, supported by the old bourgeois parties who acted to prevent a social revolution.  The people of Paris, however, were demanding defence of their city, universal elections and municipal freedoms. A “Commune” was declared by delegates from the arrondissements in January 1871 and the Revolution was about to begin.

The Paris Commune was the first revolutionary upheaval in France in which the working class played the leading role. “Its true secret was this,” wrote Karl Marx. “It was essentially a working class government, the product of the struggle of the producing against the appropriating class, the political form at last discovered under which to work out the economic emancipation of Labour.”

The government moved to Bourdeaux, headed by August Thiers who had suppressed workers revolts in Lyons and Paris in 1834 and 1848, referring to them as “that vile multitude”. Paris was defended by the Commune, with cannons placed on the Montmartre hillside. The army attempted to move these guns on the night of 20 March, but the officers in charge forgot to bring horses to draw the guns away and the populace was alerted. They fraternised with the soldiers and drew them away from their commanders. The army retreated to Versailles, but the Commune made its first and most fatal mistake. They failed to pursue them.

The Commune had two months to make its mark on history. “Time,” Marx said, “was not allowed to the Commune.” The political spectrum of the Commune was wide: Jacobins, socialists, members of the International and anarchists. The provinces supported Paris so long as municipal liberties remained a Commune demand. The more revolutionary Commune characteristics found strong support in the larger French towns, such as Lyons and Marseilles (where there was a short-lived Commune). The countryside remained antagonistic, a conflict that stretched back to 1848 when the peasants had supported Napoleon III against Republican Paris, helping to assault the city’s barricades.

For many Communards the Commune was not revolutionary enough. Some wanted to seize the National Bank. “The appropriation of the Bank of France would have been enough to put an end with terror to the Versaillais”, declared Marx. But the Commune supported the setting up of workers cooperatives which resulted in ten large factories taken over by their workers. The socialist paper Affranchi called this, “The glory of the Paris Commune, rallying and bringing over definitely all workers to its side.” But the attempts by some of the Commune’s delegates to take over the monopolist factories for the workers were not taken up.

Decrees on educational reform were ambitious although little was accomplished. The poet FB Clement faced the issue in the pages of Le Cri du Peuple. “What will remain if the people are defeated?” he asked, “if not the principles enshrined in its decrees. They can kill us if they wish, they can rip down our posters and remove all traces from the walls, but the principles that have been affirmed will still exist, and whatever is done, whatever is said, they are monuments that the Versaillais cannot destroy either by strokes of the pen or shots of the cannon.”

In Lenin’s words the Paris Commune was “a festival of the oppressed”  which lasted long enough to show mankind a possible new future. Direct democracy of delegates replaced the parliamentary representatives. The Commune declared that “those elected by the people have the duty of keeping in constant touch with their electors in order to give account of the mandate they have received and to submit themselves to questions.”

The fighting for a total involvement of the people in their own democracy gripped Paris. The newspaper Rappel declared, “Today Paris has become truly pictureaque with the cries of its paper-sellers from dawn to dusk. It is a permanent concert, a sort of perpetual fair.”

Debates took place, at the Hotel de Ville, and in cafes and clubs. At the Club St Lieu they discussed  ‘Whether the rich should be shot or simply made to give back what they had stolen from the people.” The vote taken declared that they should first surrender their ill-gotten gains and then be shot. A woman at the Club des Proletaires suggested that as a last line of defence women should march to the basrricades with their children. “We shall see if the solders fire on them. Perish our children if necessary, but the Commune must live.” The League of Prostitutes met and declared that, “We are 25,000 and we will rip open the guts of the Versaillais.” Some took up arms, others became nurses. Many died on the barricades.

In the words of the historian Stewart Edwards, “The Commune was a truly revolutionary event, the breakthrough into a new order where what seemed to be barely possible, however fleetingly, became actual.”

Neverthelees, a gap existed between the demands and hopes of the people and the actions of the Communards. Eduard Vaillant, editor of Affliche Rouge, expressed this difference when he wrote, “Instead of a revolutionary Commune, Paris had an elected Commune. It did its duty and it did its best. But because of its electoral origins, it could not have the unity of action and the energy of a committee arising spontaneously, from a people in revolt.” A Communard, August Malin, was later to admit, “The men of the Commune were not up to their task. One is never up to a people in revolt.”

The army broke into Paris in the last week of May 1871. A massacre took place. Le Figaro spoke of the need, “to purge Paris. Never has such an opportunity presented itself for curing Paris of the moral gangrene that has been consuming it for the past twenty years. What is a republican? A savage beast … we must track down those who are hiding, like wild animals. Without pity, without anger. Simply with the steadfastness of an honest man doing his duty.” Le Monsieur Universal said that the Communards should be treated as “the most appalling monsters ever seen in the history of humanity.” Le Bien Public spoke of the need for a “Commune Hunt”.

Paris was put to the sack by 130,000 troops. Upto 30,000 people were slaughtered with corpses thrown into the River Seine. Blood ran down the streets. Bourgeois women  poked at bodies with their sunshades while their husbands boasted to theit wives and children of the numbers they had killed.

The dead took their revenge. The large numbers of corpses in the streets threatened pestilence. There were over a thousand piled outside the Trocadero. Outside the Ecole Polytechnique the bodies were three deep in a line one hundred metres long. Limbs were sticking out of the ground in Place St Jaques. Flies were everywhere. Even the London Times condemned, “the inhuman laws of revenge under which the troops had been shooting, bayonetting, ripping up prisoners, both women and children, during the last six days.”

As well as the 30,000 killed in this way, a further 25,000 were exiled to island prisons where many died. The ruling class exacted their revenge in the only way they considered appropriate, with a bloodpath.

Once the city was subdued, the national government celebrated its victory by constructing a monument in ‘expiation’ for the crimes of the Commune – the Sacre Couer, a white basilica dominating Montmartre, which had been the centre of Red Paris.

If you visit Paris and the Sacre Couer think of why it is there and think of the people defending that hill at the end of their short-lived Commune. In the Jardin de Luxembourg visualise the corpses heaped there by the troops after the carnage on the barricades of Rue St Michel. Then take Metro Line 2 to Philippe-Auguste station and visit Père Lachaise cemetery, Of course pay homage to Oscar Wilde and Frédéric Chopin, Gertrude Stein, Molière, Marcel Proust and Jim Morrison. But don’t leave without a visit to the momument to the Mur des Fédérés. On 28 May 1871, 147 Communards were put against this wall, shot and thrown into a trench below.

Tweny years ago, I was standing at this spot when an old man approached me and said that his father had first taken him here on his shoulders. “Tourists come to Paris, and they know about the 1789 Revolution, but how many know about the revolution of 1871? How many of us French even  know?” He was silent for a long time, then raised a clenched fist to his temple. “The truth about what happened here has been hidden for too long. It was a revolution of more than its own time. And it is our duty to keep their struggle and sacrifice alive.”

Walking back to the Metro station, I remembered a Mexican proverb, “They tried to bury us, but they didn’t know we were seeds”. 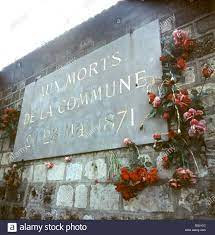 This is written on the 150th anniversary of the Paris Commune

Tweet
This entry was posted on 7 August, 2021 in homepage and tagged David Wilson. Bookmark the permalink.