Lol Coxhill, who died in the small hours of Tuesday morning, was fairly short in stature and a giant. I’m not qualified to write an obituary. The Guardian has a generous one (http://www.guardian.co.uk/music/2012/jul/11/lol-coxhill?newsfeed=true), though it conveys more of him as ‘character’ than musical genius. To go deeper, see the biography on his own website (http://www.lolcoxhill.com/text/context.htm). Deeper still? The book “The Sound of Squirrel Meals: The Work of Lol Coxhill” (ed. Barbara Schwarz, blackpress, Hamburg/London, 2006, £16) is a wonderful labour of love, though it may not be easy to find. I heard Lol play many times over 30-odd years, in various settings, but often solo. At first, the sound of a single soprano saxophone exploring every corner of itself was probably a bit daunting for me, but it came to seem one of the few truly normal things. In early days, I was too awestruck to try to strike up conversation, and he had a bit of an acerbic exterior. Of course it turned out he was down-to-earth and utterly lacking in pretention; generous and enthusiastic about music of all different kinds; deeply and sharply funny. I remember: some multi-talented gig in hip West London that Lol was playing (unpaid). It was clashing with some other gig he was also supposed to play (unpaid). “But I thought I’d do this one,” he said. “I’d rather be exploited than ripped off.” Rather too much of the career that England offered him seemed to come down to choices like that. I remember: a dream I had about him, one of three or four fundamental music dreams. He was playing some kind of ferocious, stamping, hilarious dance music, for a dance that was a cross between the Skinhead Moonstomp and a Morris. It was chthonic, pagan, slightly frightening and exhilarating. There was something deeply English about his playing – the shreds of nostalgic old tunes he’d weave in, the comedy and self-depreciation and the otherwise-unspoken passion that were always springing up in it. Perhaps that’s why he was so much better appreciated on the Continent than here. I remember: early last year, he came to record a saxophone solo on a song in our home studio. (It’s here, if you want to hear it: www.touched.co.uk/sounds/7grace/imgvol2/2-12 Gone for Good.mp3) We were having a beer afterwards, before supper, and I’d (carefully) selected a record to play that I thought he’d enjoy: Bags & Trane, the 1961 album by Milt Jackon and John Coltrane. He was listening, and he started to weep. “I’m not upset,” he said. “It’s just that the music is so beautiful.” 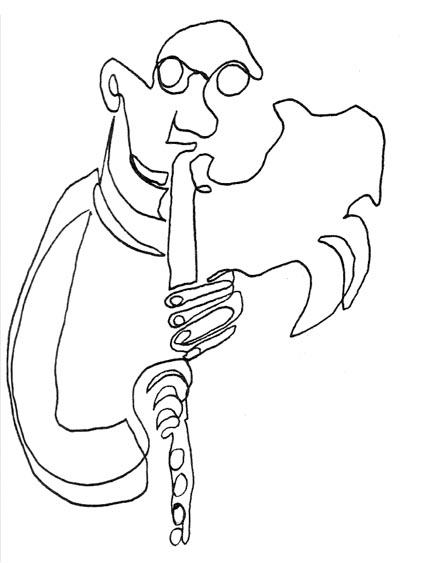 The drawing above was done in a single line, trying to follow one of his breaths. The poem below was written with a similar goal in mind, in the course of a Lol solo improvisation. (The gig was at the Seven Dials Community Centre, Covent Garden, about 20 years ago.) I wanted to see if I could keep inventing in words as long as he did in sounds: if you know his music, I think you might hear that some of his tone and phrasing has leaked in here, and the story’s been twisted into the kind his lines might tell. 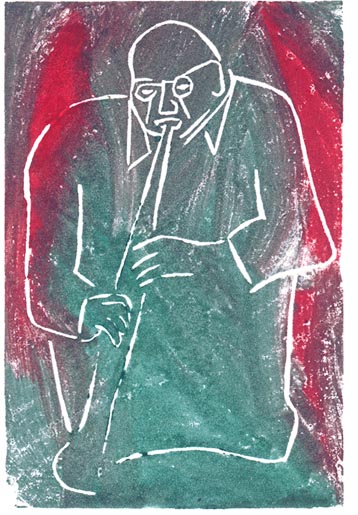 Extruded citric arrangements of tones
cantilevered over against the overtones…
Something stirred on the heap of memory.

Esemplastic corrosive displacements of tones
skirting themselves with overtones…
Cockcrow on the mound of memory.

Filibustering epicacophony of tones
sardonically figured with baroque undertones…
Glint of metal on the pile of memory.

An old-fashioned tune’s dismantled tones
assemble like ghosts in the overtones…
Spike of grass on the brow of memory.

Splay of clownish inarticulate tones,
poignant buffoon with harlequin undertones…
This was mine on the ash-tip of memory.

Elliptical double-edged tones…
Underdog truth comes over
like the sun on the nightly rise of memory.