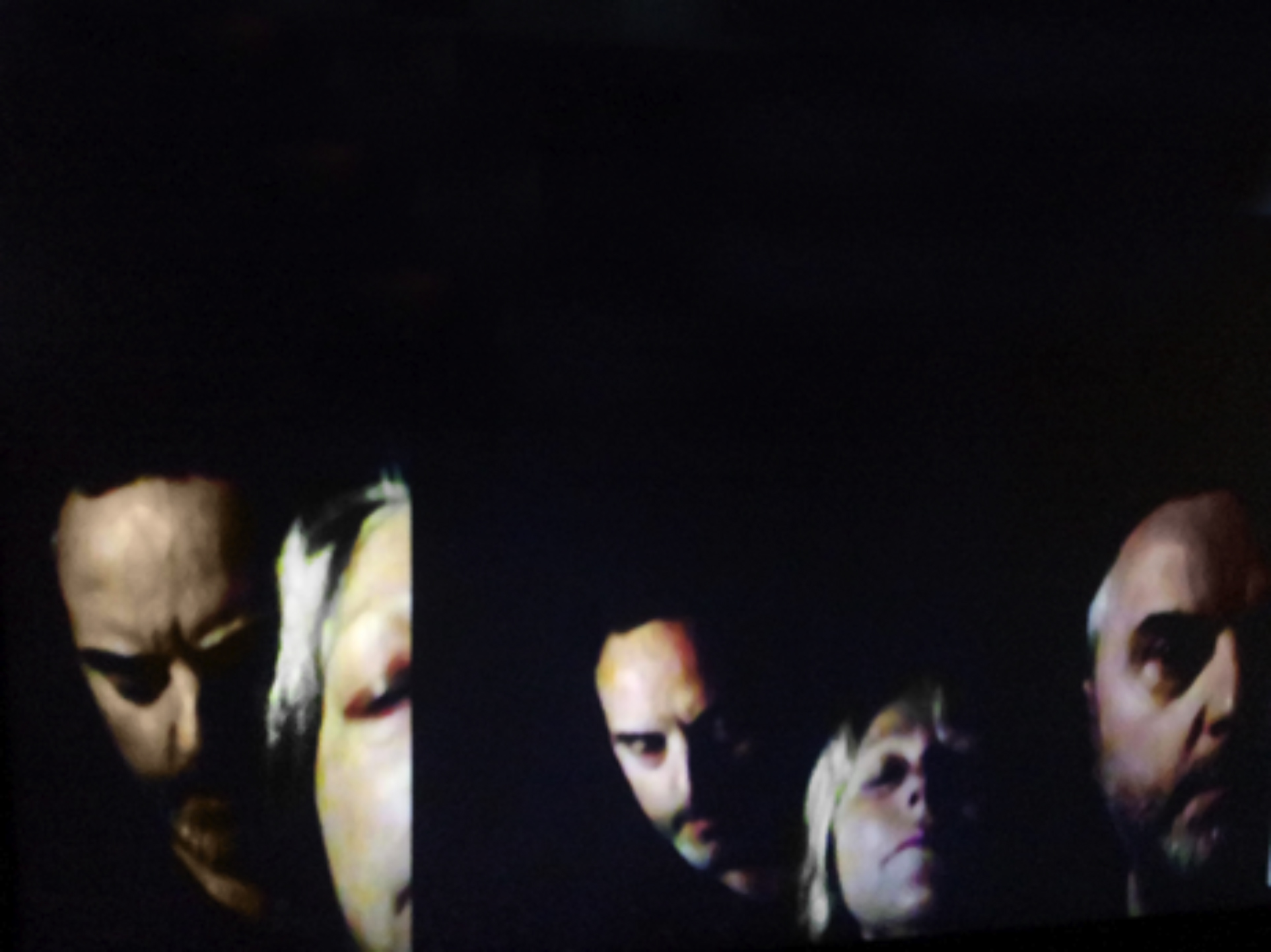 Rupert Loydell: Martyn, I first saw you playing in your band Eyeless in Gaza in Coventry, back in 1980, with instruments spilt all over a pub table. How have you managed to keep making music for so long, and kept the band together?

Martyn Bates: That was the very first gig we did, and there was something mercurial at work, that I felt – a spirit, a channeling, a catching of a general energy that was pretty apparent at the time, a total zeitgeist. The music was in the air, and we grabbed it, made it ours. Pragmatics entered into the picture pretty early on with the original concept – the two person format, that decision was born out of past experiences of trying to create music with several  players: there’s too much of a negative attrition at work  there – no: the two person, completely democratic arrangement was the only one to tackle this with – it worked, it worked well, so we embraced it. Yet it all felt pretty incoherent, and that was a good thing – still is. Anyway – I still love music, and I still love making music – the communication – and that hasn’t changed one bit.

RL: I guess we’d have to call Eyeless post-punk? That kind of music seems more popular than ever now, with reissues, reformations and reassessment going on everywhere. What’s post-punk’s appeal? Do you mind being included under that label?

MB: I don’t like the label, tho I get it, of course. A curse I’ve always carried with me is the fact that all my life I’ve wanted to ‘fit in’ – even on the outside of things – and thats a mistake, an error of judgement – but you have to galvanise your energies, and that’s one way to do it. But, as regards all that, it’s all fucked now sociologically speaking, all fucked: there’s nowhere to belong but to yourself and your own soul and its sympathies and empathies in relation to others.

RL: Eyeless in Gaza’s Mythic Language box set could be considered both part of that cultural reassessment, but also a very personal reinvestigation of your past: particularly with regard to your more improvisatory music and the early live experience. Tell us about how you put the box together.

MB: It’s as personal as hell, deeply so. You have to understand that to me, the music of Eyeless in Gaza and all the solo work I’ve done is tantamount to some sort of personal history of my unconscious. It’s a huge body of work, and it’s often overlooked  and neglected by so-called ‘cultural commentators’…

With regard to putting the box set together, aside from spelling things out to the aforementioned ‘critics’, one of the main things I wanted to show was the almost legendary ‘noisy’ and hitherto written about but unheard-on-record side of Eyeless In Gaza’s early work, where we played with harder – you might say more aggressive – musical forms that we explored in the very early days – to show a broader perception beyond all the lyricism of the band – the lyricism that shows on most of our early albums. We were so prolific back then that most of this stuff has never seen light of day prior to this album (Mythic Language). Also, I had two new books of poetry and stuff that I wanted to put out as part of the package – tho, to my chagrin, they ended being available via download only.

RL: You also have a solo career going, as more of a singer songwriter. Is that right? How does it differ from the music you record as Eyeless in Gaza?

MB: I don’t know how to answer that really, except to say that it all feels like the same work to me. At times I think it inevitable that my solo stuff provides me with a differing kind of creative freedom – and I am annoyingly unclear as to exactly how that happens or what that means. At other times, working with Peter Becker in Eyeless in Gaza, crafting sonic landscapes, I have far far more creative freedom than I could ever provide for myself. I can take wilder chances within Eyeless in Gaza, and that’s why I always want it to exist. Overall, if it’s Eyeless in Gaza, or Martyn Bates solo, as a writer, performer, artist, I always feel that it’s the method of composition that I use that’s paramount: first, the moment of inspiration/possession, then comes the craft that’s applied. There is no ‘real’ formula however beyond listen to the soul, that’s all.

My attitude in my solo work (even tho you might perhaps not guess it) and Eyeless in Gaza’s attitude has always pretty much been one of ‘this is my voice, not your fucking voice, so make your own fucking statements elsewhere if you want to say something. Don’t fuck with my/our music!’ However, all of this comes with a price of course; and the fact that the music doesn’t seem to care about fashion and mainstream participation is actually both a handicap and a value. In fact, on some levels it’s a real fucking total handicap: altho we try not to care any more about this stuff, I guess it still sticks in the craw somewhat. ‘The work is its own reward’ is the maxim I endeavour to function by nowadays. For now, I accept this… almost!

On the other hand, you might say that with the solo work, it’s just me really, and it’s me that’s writing the songs, playing the songs, singing the songs – but oh I fucking hate the label ‘singer-songwriter’, I hate all these labels, and I hate that people need a label to even listen. I understand why, I understand all about the theory of transparency, but it doesnt stop me hating it.

RL: Tell us about your new solo album.

MB: Fireworks & Jewels/The Colour Of Amber features myself on voices,  acoustic guitar,  piano and harmonicas, with Elizabeth S. playing banjo and voice … with Nurse With Wound/Coil collaborator mysterioso Alan Trench helping out beautifully with occasional colourings such as electronics, bowed cymbals, feedback, bells, percussion and other stuff. Alan and I produced it, and the whole thing was recorded at Bridge House Studios, Evia, Greece, May thru July 2015. It’s the third solo album I’ve done in as many years, and I guess you’d say it’s a collection of mostly voice/guitar pieces with a focus on the song – words and music stripped to core elements. I wanted to tackle some elusive and mercurial ideas and concepts with these songs – for example, I wanted to look at the way that in what you might call heightened moments in everyday life – within those moments where there are ‘fireworks & jewels’ you might say – there’s always a spark or a thought there that flashes the colour amber, an elusive, tantalising warning light that you know is eternal, and forever, and yet it’s somehow always just out of reach… I think the key words that make sense here might well be Process & Effect,  Illusion & Reality, or feasibly, in keeping with the album’s title, Shadow & Substance.

The weird thing is, with the whole album being recorded on the Greek isle of Evia, somehow the pervading atmosphere of uncertainty and unrest of the whole current social, political situation influenced something of the brooding character of the album.

Overall, however, I’d say my approach is similar for all my work, although the end results are spectacularly different, sonically speaking. With the ‘song work’ such as Fireworks & Jewels there is a more directed focus in creating both the music/melody and then the lyric/text – however, my ‘feeling’ towards the approach is ever the same. It is, you might say, ‘mystical’ in my supra-reliance on the intuitive, on a kind of channeling. Collaging is used in my method – with regard to writing both the tune and the vocal melody, and the essence of the text, and the timbre and meaning of the lyric. I also use this device when creating the musical setting for the whole piece, i.e. I use it to direct and decide whatever I play, be it keyboards or guitar. I use no other structured methodology other than this. Always, always however, I am aware of myself as both artist and craftsman. This is work, it is not ‘happenstance’.

RL: You’ve also investigated and re-imagined a host of Murder Ballads, worked with improvisers such as Lol Coxhill and Max Eastley, and set texts by Samuel Beckett to music. That’s a pretty wide bunch of influences and collaborators, yes?

MB: Yes, I very much liked doing all of that stuff – its good to flex the muscles once in awhile. But as for where I live… well, offers come in for collaborative stuff, and I’ve been doing some new Twelve Thousand Days music, but I have not been picking up on any others of these offers lately. I don’t know, in Eyeless in Gaza Peter Becker is my collaborator. To a lesser degree, Elizabeth S, also, on my solo work of late. That seems to suffice at the moment.

RL: How do you write the words to your songs? I always think of them as fragmented and imagistic poems. I loved seeing them collected in the books of lyrics you published.

MB: I see it as my life’s work, and it’s something I am fiercely proud of – and you are one of the few people to pick up on those qualities in what I write, actually …

RL: Did you ever think you’d be here 35 years on, still making music? Did punk and post-punk open doors for you, or where you always going to make music anyway?

MB: Yes! Yes! A thousand times yes! Without being arrogant, I truly feel that I continue to have much to offer, and that if people stop to listen, they will hear. My perspective as an artist boils down to simply this: we all of us see the world in terms of narrative, and we all have a story – that’s a fundamental necessity and a given. Some stories are tales of untidy threads that cross and re-cross, refusing an obvious linear orientation – in fact that’s most everyone’s story and that’s where I am – as antennea and conduit. I still believe that ‘love is a gift’ Rupert, even after all these strange and estranged years.

RL: Thanks, Martyn. Anything else you want to add?

MB: I still despise the very idea of people gravitating towards music because of flash and virtuosity, and the whole stifling, soul-crushing mentality that that attitude suggests. For me, the whole idea of singing, of playing an instrument as anything beyond it being ‘a thing in itself’, well, it feels wrong… tho, yes of course, I love to play, to sing! I guess to me it’s all breathing, separating myself from everything which is not numinous. For me, the whole process of making music is all about totally living inside the music of that moment – I can’t separate the ‘playing of the instrument’ from that: like the man said – I believe in playing the living instrument.

Martyn Bates’ homepage is at http://www.eyelessingaza.com/mb.html

View all posts by Rupert →
This entry was posted on 19 November, 2015 in homepage and tagged Interview, Martyn Bates, Rupert Loydell. Bookmark the permalink.