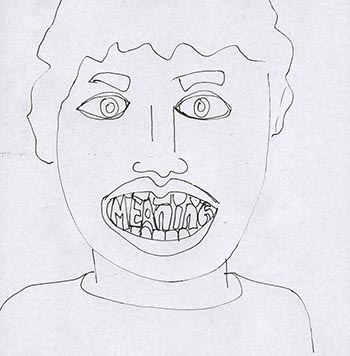 ‘Language is a device which deludes us into thinking we can know something.’
The Mister

A man is standing on a wooden box; he is giving forth to a form of speech which might be considered poetry. A small crowd have gathered around him to listen. The box on which he stands has a strap from which it can be slung, thus allowing the orator to make a quick getaway should the situation develop into the need for such an undignified retreat.

An innocent bystander called Smith is listening to the man’s spiel and is intrigued by his choice words.

‘What do you mean “meaning?” Calls a voice from the crowd, the tone of which quickly identifies the haggler as Smith’s abrasively existential friend P.B. Rivers.

Smith goes across to join him but finds him already walking away; he has no interest in answers but seems to enjoy tossing his prickly observations around at whim while leaving others to clear up the mess.

‘What did you make of that fellow?’ asks Smith.

‘He’s on the right track’, says P. B. Rivers. ‘But he’s a lone voice in the wilderness and will get little encouragement. Music has long taken over this form of public display and poetry no longer challenges the ignoble halls of our complacent municipalities.’

‘Bloody hell! That was a bit of a mouthful,’ thinks Smith.

‘Still’, he says. ‘It takes a little courage to put your box down somewhere like a busker and unleash your poetry on the general public.’

‘That’s why he will have few imitators,’ says P. B. Rivers. ‘Long gone the wild Bard hurling his dynamite incantations into the teeth of the wind. All passion has been leached out of poetry, and the song has departed, leaving just a strange kind of linguistic tailoring that looks very well on paper but is fashionably devoid of soul.’

‘But surely as an art form…’ protests Smith.

P. B. Rivers cuts him short.

‘Art form!’ he snorts. ‘In my view all art has only one criterion. Music, painting or poetry share a single truly reliable measure and standard which can be stated in four simple questions.

Does it fill you with wonder?
Are you enchanted by the subtleties of tone, or shade of coloured form?
Do you feel transported from the daily mindset into an alchemy of magical distillations?
And lastly…
Are you slain by its sheer beauty?’

‘That’s a bit much to ask for these days,’ comments Smith. ‘What you’re talking about is quality, and quality never comes “user friendly”; neither can it bow to fickle public opinion.’

‘Public opinion I liken to the miasma arising from a Council landfill site,’ says P. B. Rivers.

‘Some might consider that statement to be more than a little elitist,’ says Smith, who now suffers a minor panic attack, he is beginning to sound like P. B. Rivers himself. He decides to get away as quickly as possible; he will pose a complex question and while P. B. Rivers is pontificating may be able to slip away unnoticed.

‘You haggled that poet on his use of the word “meaning”. What was your quibble?’ he asks, in preparation for his escape.

‘Neither you or he have any idea of the significance of that word,’ says P. B. Rivers. ‘It is the keystone supporting the very edifice of language itself, and can reduce the whole linguistic dimension to nothing but useless rubble.

Smith can see that P. B. Rivers is set to launch himself into a lengthy tirade and so begins taking microscopic steps backwards, hoping that the slowly increasing distance between them will pass unnoticed.

P. B. Rivers continues: ‘Meaning might be defined as, “An arrangement of linguistic concepts illustrating the intention of a word.” But in order to make that definition I have had to use eleven words, and without those eleven words the word “meaning” is itself totally meaningless.

Furthermore, each of those eleven words requires an equivalent number of words to define them too; else they are also meaningless and so on. This process quickly leads to words in their millions – all to shore up the reality of one word which of itself means nothing.’

‘Therefore I ask: What does the meaning of meaning mean?’

Smith has no answer to this, not on account of his inadequate brains, but rather because his miniscule steps have by now taken him quite out of sight and the question become too distant to hear.

Tweet
This entry was posted on 5 June, 2014 in homepage and tagged dave tomlin, nick victor. Bookmark the permalink.