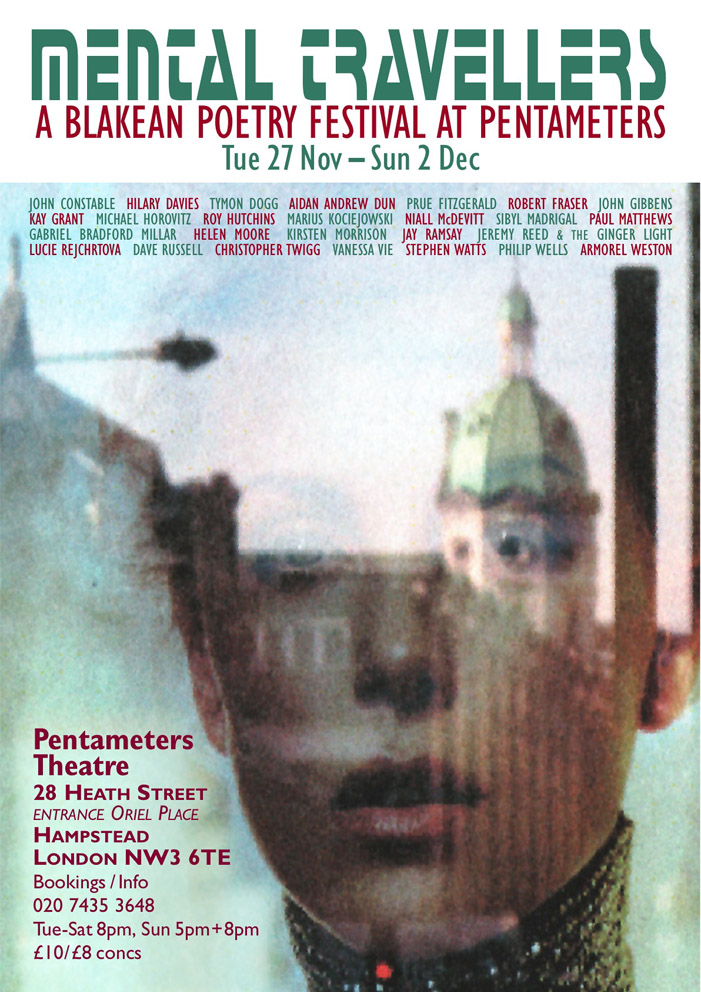 Hampstead’s legendary playhouse PENTAMETERS THEATRE is to return to its poetic roots by hosting a week-long poetry festival from late November to early December. MENTAL TRAVELLERS will feature a stellar line-up of poets and musicians inspired by the spirit of London’s genius loci, William Blake. The event coincides with Blake’s birthday on November 28.

Pentameters, now in its 45th year, was an essential part of the London poetry scene from the late Sixties onward. That original counter-cultural generation is represented in a reading of the poetry of Heathcote Williams (by his dedicated rhapsode, Roy Hutchins) and in a performance by “Children of Albion” editor Michael Horovitz; while an earlier ancestor of the British poetry underground is celebrated in AN EVENING WITHOUT DAVID GASCOYNE.

‘The Mental Traveller’ is the name of a William Blake poem that seems to be an early 19th century way of saying ‘psychogeographer’. Many of the artists involved in the festival have used ‘psychogeography’ as a skeleton key into the imagination. The Poet of Kings Cross, Aidan Andrew Dun, will be the ringmaster of the BURNING TYGER REVUE, the first night’s show, while Saturday night’s extravaganza, 64,000 GENII, features The Poet of Southwark, John ‘Crow’ Constable. Stephen Watts writes London poems but mental travels to all corners of the globe via his translations. If you’ve enjoyed the prose of psychogeography, check out the poetry.

The festival, as well as featuring the living Hampstead poet Jeremy Reed, will also celebrate a dead one. AN EVENING WITHOUT DAVID GASCOYNE will be a tribute to the legendary English Surrealist poet who once lived on Tanza Road, by Parliament Hill.
Also appearing will be Gascoyne’s first biographer, Robert Fraser.

William Blake’s birthday will be celebrated by A NIGHT OF DELICIOUS SONGS, new settings of Blake poems by singer-songwriters including Tymon Dogg, Kirsten Morrison and Dave Russell.

Jay Ramsay’s evening VISIONS FOR THE WORLD TREE includes the sublime naturalism of Paul Matthews and the spoken word pyrotechnics of the Fire Poet on its bill of unabashed English mystics.

Thursday’s TAKE THIS  HAMMER will showcase the interzone  of poetry and music with The Children, the Sybilline Sisters and Vanessa V, as well as Michael Horovitz and John Gibbens.

MENTAL TRAVELLERS will take you on a fabulous journey away from the harshness of Austerity England, the farce of Hackgate and Plebgate, and the business-as-usual of what William Blake called ‘The Opressors of Albion’.

Throughout the week, the feast will be a visionary, radical, and transformative one.

Sunday 2nd December, 8pm
THE TIGERS OF WRATH
Roy Hutchins performs the poetry of Heathcote Williams,
including The Tigers of Wrath One Response to Mental Travellers