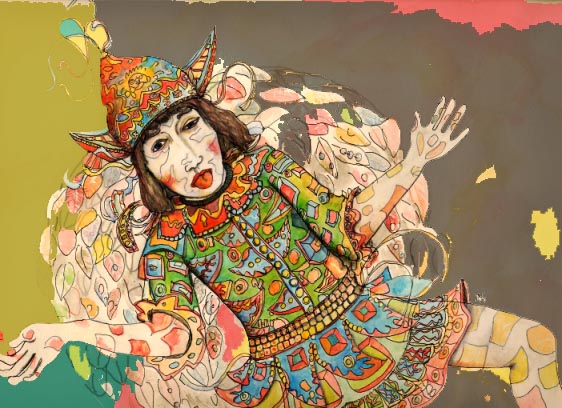 Scene: the car park outside The National Museum of Nationalism. Metal and Dark are sat in their car.

Metal: I don’t want to pay! I didn’t know you had to pay to get in — Surely that’s not right! Maybe it’s just foreigners who have to pay.

Dark: Foreigners shouldn’t have to pay. They shouldn’t be allowed in.

Metal: I don’t mind them being allowed in. But maybe they should have their own allotted time. Like between 11pm and midnight on every third Wednesday.

Dark: I think an hour would be too long. Give them half an hour at most.

[Enter, descending from the skies in a brilliant silvery cloud and to the sound of a trumpeted fanfare, and landing on the roof of the car, the Angel of Tolerance & Niceness]

Dark: Did you just hear a noise? It sounded like something landed on the roof of the car.

[The Angel of Tolerance & Niceness leans down to peer, face upside down,  through the windshield.]

The Angel of Tolerance & Niceness:  Do you fellows need something to do?

Metal:  What the fuck?

Angel of T & N:  I want to share a thought with you, which is that bigotry is fuelled by frustration.  I think you boys are frustrated.

Metal:  Where are you from, weirdo?  You’re not from this country.  I can tell by your accent and the way you hang upside down.

Angel of T & N:  I’ll bet you have some talents which, if employed, would give you a sense of worth — and the result would be —

[Two Pakistani women who are sanitation workers at the Museum approach]

Angel of T & N: Good day, sweet damsels. I am so happy to answer any questions you may have. In fact, there’s nothing I enjoy more than a good Q&A session.

Dark: Sweet damsels? Who is this guy?

Divela: So, what about the wings? Are they real or not?

Afsheen: What do you mean by that?

Angel of T & N: It’s all a matter of perception. Cognition. Awareness. A question of how one perceives something or someone. I’m talking about point of view. Interpretation. Opinion. Belief, even.

Metal: I have an opinion. I think you should get off our roof.

[With a flapping of wings he descends to the ground.]

Divela: Anyway, they’re nice wings, real or not. That was a good flap.

Angel of T & N: Thank you. But I came here to make a point to these two bozos.

Dark: Hey, who are you calling bozos?

Angel of T & N: You and your friend. I was saying, wasn’t I? How bigotry is fueled by frustration.

Dark: Hey, who are you calling frustrated?

Metal: We’re not frustrated. We’re just not happy with our lot, is all. And I don’t mind telling you, when I say “our lot” it’s just a figure of speech, because our lot isn’t much at all.

Angel of T & N: The trick is to be satisfied with one’s lot and to be happy that others have their own lot too. I have leaflets on the topic. Perhaps you would like to take one for reading in your own time…..?

[He reaches under a wing and pulls out a batch of leaflets.]

Dark:  I do like leaflets.  I’ve always liked them.  Maybe it’s just the word.  Leaflets.

Metal:  Dark, don’t be a putz.  This angel guy is conning you.

Dark:  Putz is an interesting term.

Divela:  Due to racial difference, you young men can’t even notice that we are beautiful.

Afsheen:  And so we are going home.  Goodbye, bozos.

Dark:  Everybody has an epithet.  But wait — girls –

Afsheena: Yeah, we’re going. We have white man’s drains to block and urinals to sabotage. So we need our rest.

Metal: Let’s get outta here. There’s a Mahler concert at the Municipal Hall. We can catch it if we hurry.

[He flaps his wings, ascends into the sky and disappears. A feather falls from a wing and settles upon the tarmac of the car park, unnoticed.]

One Response to Metal & Dark  – A Play