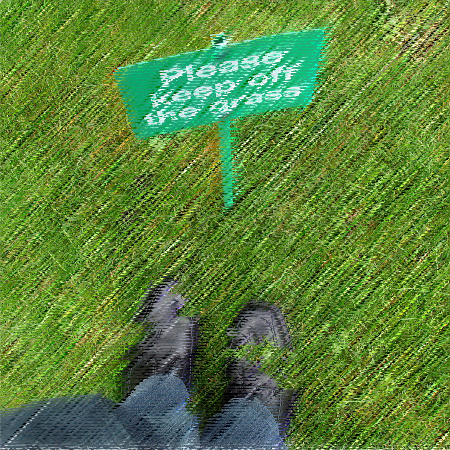 The law has two aspects: the spirit and the letter. The spirit of the law allows a thoughtful judge to identify and consider mitigating circumstances in his judgements. The letter of the law however, recognises no such considerations.

Law has many officers to implement its edicts, from the common police constable down to the parking warden, and even a humble park-keeper has a hand in its implementation.

Rare though it is for that hand to be endowed with the impartiality and thoughtfulness of a qualified judge or magistrate, and thus mitigating circumstances are not to be expected where petty officialdom wields its power.

Adrian has an appointment to meet a friend in an hour and he decides to take a slow stroll in a nearby park. Entering he saunters along a gravelled path lined either side with well kept lawns; he has time to spare and therefore is in no hurry. Daffodils are freshly out and nod affably in the breeze as he passes, and he keeps to the left of the path having noticed a young woman approaching with a child in a push-chair. The woman’s attention never leaves the child for a moment and she coos and clucks as would a mother hen, whilst endowing the child with all manner of other such reassuring sounds. Adrian watches as, owing to her fixed concentration she seems entirely oblivious of the meandering route she takes – first to one side then to another, and he moves to the middle of the path thus allowing her free passage either side. His strategy is defeated however, when a moment before they pass she too makes for the centre.

Desperately he tries to avoid a collision by hopping adroitly to the left, whereupon the push-chair, no less adroitly swerves to block his path and once more he must hop, and only manages to save a fall by putting a foot on the grass. The girl with the pushchair hasn’t noticed a thing, and sails blithely cooing and clucking on her way. Adrian looks after her in annoyance, then retrieving his foot he prepares to continue his walk when…

‘Oi! You, sir.’ The voice comes from behind him and he looks around. A middle aged man with a severe suit and some sort of official peak cap confronts him.

‘You were on the grass,’ accuses the man who is obviously a park-keeper.

‘What do you mean?’ asks Adrian.

The park-keeper points a finger. ‘Do you see that notice there, sir?’ He indicates a small notice board staked into the middle of the grass.

‘Well do you mind telling me what it says,’ the man demands.

Adrian is ruffled by the man’s arrogant manner but not wanting trouble decides to comply.

‘That’s right sir, keep off the grass, and you just walked on it.’

‘Well I didn’t actually walk on it,’ says Adrian. ‘I just stepped on it with one foot.’

‘And was that one foot on the grass?’ says the keeper.

The park-keeper cuts him short.

‘And was that foot yours, sir?’

‘Of course it was my foot,’ says Adrian impatiently.

‘Then if it was your foot you must have been on the grass; and what does the notice say?’

‘But it wasn’t my fault,’ protests Adrian. I was forced off the path by that push-chair.’

‘Well we all have our reasons for what we do sir,’ says the park-keeper, ‘and like you, might think them justification for breaking the law. But the law also has its reasons, sir. For instance someone might look around and think: Right, no park-keepers about, I’ll just take a short cut across the grass. Or, what is this, some sort of fascist state? Sod the notice I’m going to walk on the grass. They are all reasons sir and as I said, the law also has its reasons, and if that notice wasn’t there what do you think would happen to the grass?’

‘But my case was entirely different,’ says Adrian, ‘surely you must have seen that.’

‘I saw what I saw, sir,’ says the park-keeper, ‘but I’m not concerned with the how or why; the notice says keep off the grass, and by your own admission you stepped on it.’ He pulls out a pad and pen. ‘And now sir I’d like your name and address please.’

‘Look,’ says Adrian. ‘I’m not being unreasonable, and I do understand why the notice is there, but you know very well that woman forced me off the path with her push-chair,’ He is getting angry and still naïvely under the illusion that common-sense can win him the argument. Confidently now he presses his case, albeit a little too far. Pointing dramatically at the departing woman he attempts to divert the park-keeper. ‘She wasn’t looking where she was going so it’s really her you should be speaking to. If you hurry you can still catch her up.’

But the park-keeper is unmoved by this ploy and continues to regard him with a stony eye.

‘That may be so, sir,’ he says. ‘But she didn’t step on the grass now did she? You did, and trying to shift the blame onto a lady won’t help you at all’.

‘But you saw yourself what happened,’ protests Adrian and his tongue runs away with him. ‘This is so stupid’ he mutters. But the park-keeper has heard this.

‘Now, sir, there’s no deed to be offensive,’ he says, beginning to bristle, and Adrian hastens to correct this view.

‘I didn’t mean you were stupid,’ he says, ‘just the system that you represent.’

‘I see sir,’ says the park-keeper. ‘But I’d have to be stupid myself to take employment with a stupid system wouldn’t I now?’

‘But that wasn’t what I meant at all,’ says Adrian.

‘What you mean, sir, is neither here nor there,’ says the park-keeper. ‘Where the law is concerned it is what you do that counts, and you stepped onto the grass when the notice clearly says: “Keep off the grass.”’

‘But where’s the justice in that?’ Now there is a pleading note in Adrian’s voice.

‘Well, sir, I’m not a lawyer, but as far as I understand it justice is the law. I’m not a lawyer, just a park-keeper whose duty it is to make sure the by-laws are complied with. In this instance you are in breach of those by-laws.’ He readies his pen. ‘And now for the last time I’d like your name and address.’

‘What do you want my name and address for?’Adrian is getting exasperated by the whole thing.

The park-keeper points again at the notice.

‘Yes of course,’ says Adrian,’ I’ve already read it out to you.’

‘And do you see what it says underneath?’

Adrian peers at the sign which has a further message in smaller letters beneath. He reads aloud: ‘“Penalty twenty five pounds.”’

‘That’s a bit hard, isn’t it?’ complains Adrian, ‘since I’ve never done it before.’

Adrian is getting very angry now.

‘And what if I refuse to give it to you?’ he says, beginning to fight back; but the park-keeper is ready for this.

‘I just have to call my colleagues for help,’ he says, indicating two community support officers who stand beneath a nearby tree. ‘And if you still refuse they’ll just send for a squad car and you’ll be taken down to the station to find out who you are. ─ Could take all night, sir.’

Adrian, thwarted in every direction is silent.

‘So I won’t ask you again, sir. Are you going to give me your name and address?’

Adrian, devoid of any other choice (he knows it would be fatal to do a runner) reluctantly concedes the point and offers his details. The park-keeper studiously writes these down then, proffering his pen says: ‘Just sign here sir.’ Adrian takes the form and reads:

“I the undersigned do hereby admit to a breach in the by-laws of the Borough Park and am aware of the fixed penalty of £25 for this offence, payable by credit card, cheque or postal order to the address above.

(Non-payment can lead to prosecution.)”

‘Well I’ll just sign it,’ thinks Adrian. ‘But I certainly won’t pay it. They’ll never prosecute; any Magistrate would throw such a ridiculous case out of court.’ He gives a little smirk as he hands back the pen. The park-keeper notes the smirk and surmises its origin.

‘And if you’re thinking of not paying, sir, do remember that if you’re foolish enough to let it go to court I shall certainly be there to give my evidence.’

Adrian’s smirk disappears at this to be replaced with a look of concern; for this man, radiating his granite mindset and flinging his cast-iron indictments around a court of law might not, in those circumstances at least, appear ridiculous at all.

‘Well thanks for making such a fine contribution to my sense of well-being.’ he says with heavy sarcasm as he turns to leave. But the park-keeper is impervious to this.

View all posts by David →
This entry was posted on 4 April, 2013 in homepage and tagged dave tomlin, Fascism, Jobsworths, Miscreant, power lines. Bookmark the permalink.