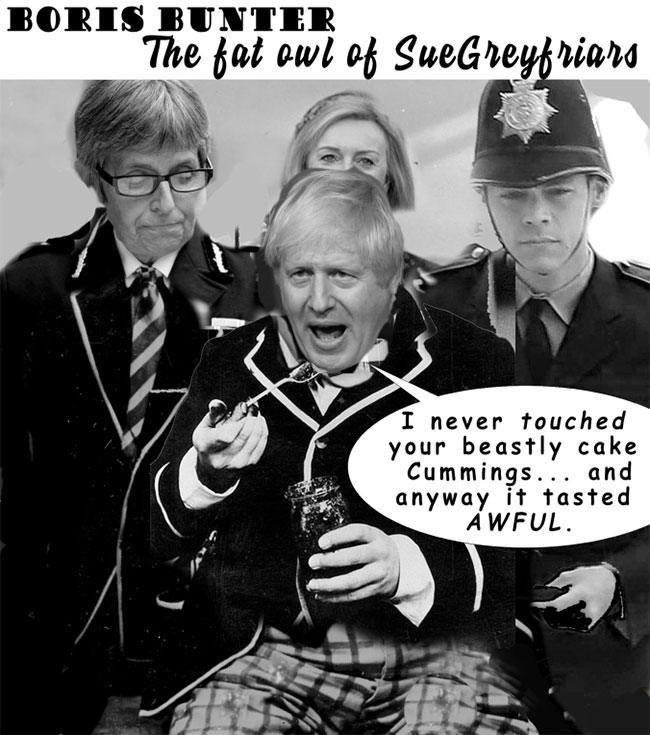 SAUSAGE LIFE
Bird Guano
The column which, when the light hits it in a certain way, looks a bit like Johnny Depp,

ROGUE STARLING IN SHARK ATTACK
READER:  Hang on… What? That’s a ridiculous headline. Where are you going to go with that?
MYSELF: The trouble with you is, you have no patience.
READER: …as the pessimistic accountant said to the unsuccessful doctor.
MYSELF:  Listen buster, I’ll do the punchlines. All you have to do is keep a straight face.
READER: Thanks, I’ll try. But seriously, what is that headline about?
MYSELF:  Just another sad story from the Naked City. The heart-wrenching tale of a starling that got mistreated by life, and ended up with a bum rap.
READER: I’m in bits and I haven’t even read it. Doesn’t anybody give a damn about starlings anymore?
MYSELF:  No. Or sharks.

Dear Wendy,
although I am neither lovelorn nor lonely hearted, I feel confident that you can offer me some solice. My dilemma is this: I recently bumped into a very nice chap in my local pub The Crown and Anarchist, who told me he was an experienced investment broker and hedge fund manager. He persuaded me to invest my life savings of £100,000, in something called cocoa futures, but I was too embarrassed to ask what they actually were. If you could reveal to me, in layman’s terms,  the nuts and bolts of cocoa futures, I would be happy to cut you in on any profits.
On another matter entirely; which loudspeakers would you recommend for my hi-fi system; a Qanon 404 amplifier fronting a triple vacuum-enclosed Barnes & Wallace ergonomic steam turntable with a 225 gram Radclffe suspended platinum and brass cartridge, fitted with a sustainably-sourced gluten-free stylus?
Cuthbert Antrobus, Beyondenden.

Dear Cuthbert,
whilst not claiming to be a financial expert, I can tell you that cocoa futures are a fool-proof way of making pots of money without ever having to do any work. A word of warning however; merely taking a bull-spread binary option whilst hedging anonymity on any stop-loss protection tranches is all very well if the stock proves to be a potential multi-bagger. My advice is to buy up an offer on a margin and then purchase a four-call option to provide additional leverage on the unit trusts. All Long-term Equity Anticipation Securities will expire immediately afterwards, providing you short your put-options before the ex-dividend date. I hope I have cleared that up.
Regarding your additional Hi-Fi question; I would have no hesitation in pointing you towards a pair of Pooter & Wynne HF-42 concrete-based Croissants with diametrically opposed aluminium thumb tweeters, mid-range hooters and low frequency waterproof crossovers. At £31,950 each they are a snip.
Wendy.

Dear Wendy
my husband Donald suffers from chronic wind, which quite frankly is ruining our social life. During a recent foursome of bridge with a couple I was quite keen on impressing, I was mortified with embarrassment by the chorus of parps issuing from the rear of Donald’s trouser area, which at times resembled a brass band attending a pet shop fire. He is a very fussy eater who will only consume Heinz Baked Beans directly from the tin, making eating out very difficult. Should I attempt to change his diet? Or could something else be the culprit vis a vis the flatulence problem?
Coco de Moule (Mrs), Upper Dicker

Dear Mrs de Moule,
Although I sympathise entirely with your problem, I suspect that at this stage, a radical change to your husband’s diet may be too dangerous to attempt. It should be pointed out that the cause of your partner’s petomania is most likely phenohybrilogeniheliophyll, a byproduct of the linoleum manufacturing process which is added by the Heinz company to prevent their flatulent, sugary concoction from tasting like goat faeces. My advice would be to install an extractor fan in the rear of Donald’s trousers, connected to a ducting pipe with its outlet situated at the farthest end of the garden.
Wendy

PEN-TOP EMOTIONS
The two men suspected of organising the systematic theft of the plastic tops of ball point pens from Hastings stationary shops have made a dramatic appearance on a local online TV show. The suspects, identical twins Bob and Wagner Tupperware of Hartlepool, have so far eluded arrest, despite having been identified from CCTV pictures by a top secret undercover police operation codenamed Operation Ball-Point Pen.
The pair were interviewed by our investigative reporter Rob Dulle on Bexhill’s Total-BexhillTV channel, where they turned up unannounced to protest their innocence, claiming to be “just day-trippers to the south coast, with absolutely no interest in the plastic tops of cheap pens”.
However, when confronted with police video evidence, Bob (43) confessed, “Yes, that’s us on W.H.Smith’s CCTV. But on my life we was only browsing postcards of Hastings, and studying interesting historical booklets”.
“Absolutely,” chimed in Wagner (37), the taller and darker twin, “We was fascinated by Hastings and its famous castle, originally a wooden tower built on top of a man-made mound or motte, which was surrounded by an outer courtyard or bailey.”

“We was desperate to see its magnificent crenelated arches,” added Bob.
Asked to explain the clear video footage showing them removing the tops of ball-point pens and concealing them in a hollowed out pumpkin disguised as a baby in a pushchair, Bob said, “Yes, it looks bad, but our solicitor has assured us that there is a perfectly legal loophole which we would be unwise not to exploit, provided we keep schtum.”

Hastings’ police chief Hydra Gorgon dismissed the TV appearance as a “publicity stunt” and a  “mockery of justice”, describing the Tupperware brothers as “Fake twins who have long been suspected of organising the systematic theft of ball-point pen tops throughout Sussex and Kent. Anyone with even a limited knowledge of Hastings’ famous castle will tell you that its arches, although magnificent, are not crenelated, That, in my detective’s opinion, is enough grounds for an arrest”.

View all posts by Colin →
This entry was posted on 29 January, 2022 in homepage and tagged Colin Gibson, Sausage life 214. Bookmark the permalink.