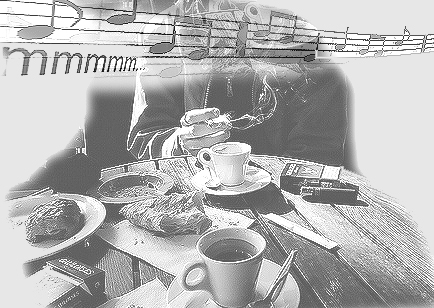 The language of music conforms within a mathematical matrix to produce a kind of grammar, whereby each tone is identified by name and endowed with a chronological period.

Thus each symbol in the language must simultaneously represent both placement and time.

Music though, like its sister, poetry, is founded upon an ultimately ungovernable spirit; wild to the rules of any grammar and always ready to confront the righteous pedant with a more existential viewpoint.

Smith, a simple soul, has encountered his friend P. B. Rivers, a rabid existentialist, and they now sit drinking coffee at a table outside a café.

P. B. Rivers opens a conversation:

‘This is the age of traffic and shopping’, he announces, and slits his eyes meaningfully at Smith as if willing him to respond, but Smith, not being the least interested in either subject turns for relief to a technique he has only recently evolved.

Realising that whistling distorts the lips, making the exercise obvious if undertaken during a boring conversation, he had discovered that he can hum without this handicap. He has also detected three levels to the discipline. The first is a hum so quiet that it is hardly detectable even by himself. The second is loud enough to be heard by another but not sufficiently so as to reveal its source. The third, an uninhibited and full-bodied hum is capable of overcoming any conversation.

‘Traffic is something other people do’, he thinks, ‘and shopping is some sort of weird art form now more popular than football; both devoid of any interest’. Therefore it is at this point that he begins to utilise his hum.

He chooses a lightish tone, not too deep and one which is easily maintained. Faintly at first and then, given the generous parameters of the situation, begins gradually to increase the volume until he perceives that P. B. Rivers has become aware of it, but not yet that it is issuing forth from Smith. He now begins to go over the top and the, by now, powerful hum, growing ever louder, makes its source obvious.

P.B. Rivers is unfazed by this display of social precociousness and merely cocks an ear; he has perfect pitch and can accurately identify any tone.

View all posts by David →
This entry was posted on 27 June, 2013 in homepage and tagged Conversation, dave tomlin, Existentialism, music. Bookmark the permalink.