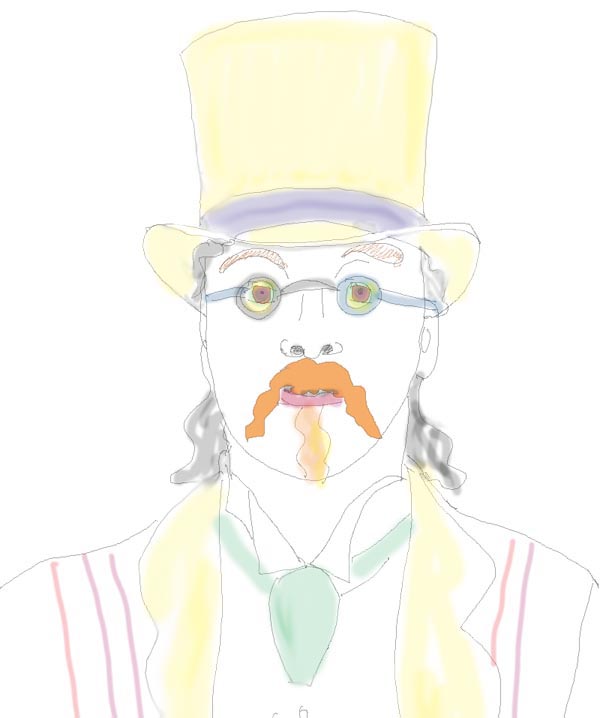 My first visit to the Jack the Ripper
conference; in a shivery suit, shiny
yet pasty faced. I could have been
some pallid clerk, a spring-heeled
escapee from the Abyss.

How naïve not to realise
that others do the same;
proposing an ancestor
as the latest suspect.

(Impossible not to love them,
their invocation of oblivion;
a linear fast-food heaven.

My record was five hours
spent eating and defecating.)

Underneath an abandoned mop.
His old journal, sealed in pig fat.

(from The Journal of Mutatis Mutandis)

Like a ginger beer bottle, exploding at some daft street fair.

Now my sons, look at that photograph of me in whiskers.

Clearly a cunt – and you only know the half.

Too easy avoiding the ‘rozzers’.

I used an electric moped – though scarcely invented then – working as a pizza delivery boy.

No one suspected a thing!

My blood-spotted uniform
taken as some new topping.

The area was gentrifying
from days of plague dogs
and leper chips.

Why these immigrants –
to chronicle the rain?

I now explain my actions in terms of diversification.
Providing a safe environment, where creative types
can network and rediscover squalor – at a distance.

(A letter, from the Psychogeographic Poets.)

Many poets moved to Spitalfields.
Drinking wheatbeer where his
‘Unfortunates’ slugged gin.

Ridiculous – our true country
is pure retail park, B & Q.

God knows why Wetherspoons is sneered at.
It’s the equivalent of a Victorian chophouse.

Let’s admit to it, the English
have always scoffed anything.

I can trace my history
through such disasters.

Did you try Elizabethan
“offal and hoof quickbits”
on the dizzy South Bank?

Or the “chipped potatoes”
on Whitechapel Road?

Boiled cabbage greens,
the grease on the cobbles,
a trudge to the next house.

I am now convinced that my old Cambridge tutor – Maxwell Otto Cornelius – was Jack the Ripper.

Specific links to Poussin’s A Dance to the Music of Time  – erroneous Latin motto, wrongly attributed to George Formby.

Space prohibits a fuller explanation of my methods.

Cornelius obsessed with her – proposing marriage.

A fast train to Kings Cross – then underground to Aldgate East.

I myself espied him
in a Brick Lane Tandori;
ruddy stains on fingers and wrists.

Tweet
This entry was posted on 12 November, 2015 in homepage and tagged nick victor, Paul Sutton. Bookmark the permalink.