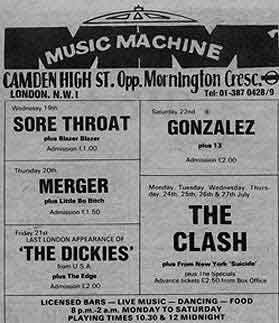 I must have been at least 16, because I was on my motorbike, but I remember signs to Frestonia and a hoarding advertising Gentle Ghost Removals. My friend lived in Holland Park and the pub near the tube station had a courtyard where leftover hippies spilled out to smoke and drink. The likes of Michael Moorcock and Lemmy from Motorhead were sometimes there, along with other musicians and poets.

We drank in The Portland Arms, a small pub at the other end of the street, and played bar billiards. My friend’s parents bought into the area early and cheap, their house is worth millions now. We made trips to central London for music at the Marquee, Rock Garden, and the Lyceum on Sunday nights; to Barnes for jazz; to Camden for Dingwalls and the Music Machine; to other venues all over town. And once we walked miles across the common from Tim’s to Putney and the Half Moon, singing all the way.

We’d drive out of town, across town or around town, wanting to hear music. And a couple of years later, with another friend, I’d walk in the dark, and always in the rain, to the London Musicians Collective, skid up the fire escape to an almost empty room and wonder at the spectacle and noise. The toilet was in the hedge outside, drinks were in the pub opposite. People strummed and scraped, plucked and bowed, shrieked and sang, generated loops and drones, explored the sounds of metal or wood, demonstrated how cyclical breathing and multiphonics worked.

It was wonderful, it was awful, sometimes both at once, but the music was fluid and alive, like the poems I heard recited, called-out and sung, cajoled from the page for one night only. Anarchist beatitudes, lyrical loves and lusts, the epic journey of a crow, a once-famous but now forgotten American, a stuttering first-timer gone all shy. This was my London, a city shared and owned by all. Lights spilled out of windows, sound echoed into corridors and halls, and you could park anywhere. I never saw so much ever again.

Now, I’m reduced to memories, comparing email notes with others, meeting up with schoolfriends 40 years later. We’ve all lived different lives, we’re all running out of the past into somewhat limited futures, out of condition and out of breath, confused to be still alive. 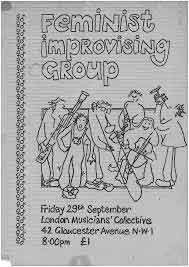 View all posts by Rupert →
This entry was posted on 11 April, 2020 in homepage and tagged Rupert Loydell. Bookmark the permalink.