Narcisa – Our Lady of the Ashes 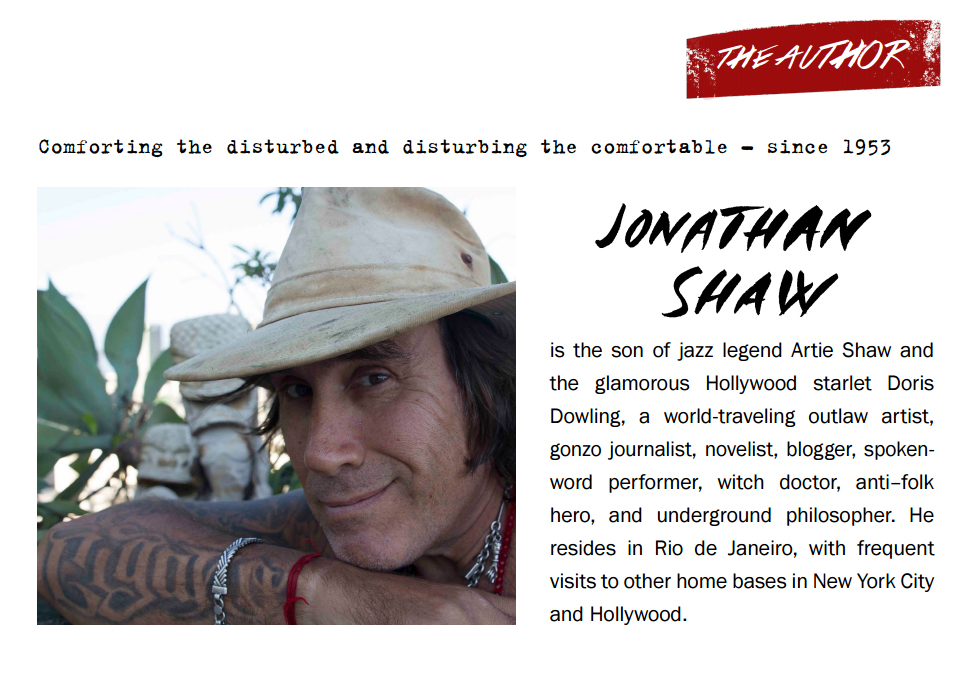 From Johnny Depp and Infinitum Nihil, in partnership with Harper Perennial, comes the first trade edition of NARCISA: OUR LADY OF ASHES, a subterranean cult classic by Jonathan Shaw, the writer described by Iggy Pop as “the great nightmare anti-hero of the New Age”. This powerful debut of destructive love and addiction by the legendary tattoo master and outlaw artist is “a wild ride through the bizarre netherworld of his own damaged consciousness,” says Jim Jarmusch. “His experiences are real and his language and insights kinetic and brutal… Shaw’s writing certifies him as a subversive and criminal inhabitant of the world of human expression.” Johnny Depp himself has suggested that Shaw is like the “diabolical, reprobate spawn” of such renegade artists as Hubert Selby Jr., Jack Kerouac, Dr. Hunter S. Thompson, the Marquis de Sade, Iggy Pop, and all of the Three Stooges. And, NARCISA is undeniably the literary progeny of such inventive, original voices as Burroughs, Bukowski and Henry Miller. Referred to by one reviewer as “a guided tour of hell”, NARCISA propels readers through the deadly slums and wild backwaters of Rio de Janeiro (where Shaw lives and writes), recounting the bizarre misadventures of motorcycle-riding, nomadic outlaw poet Cigano and his unhinged lover, Narcisa, a crack-smoking philosopher prostitute. As their doomed shipwreck of a love affair spirals downward in a vortex of madness, degenerate sex, drugs, violence and vice, the pair hold onto their irrepressible passion. A darkly hilarious work of what Shaw has dubbed “Slapstick Tragedy”, NARCISA “is a heartbreaking tome of diseased lust that oozes a tortured poetry of bloody sweat and sperm,” says Lydia Lunch in her introduction. “[It is] a grotesquely beautiful love song steeped in the perpetual twilight horror of an unbearable trauma bond….an overwhelming sex-magick magnet to the darker forces of our own primordial essence.” 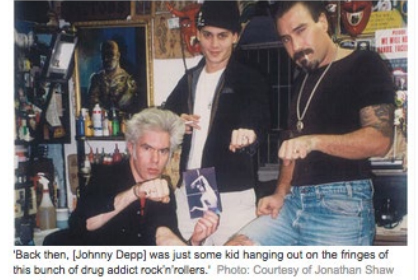 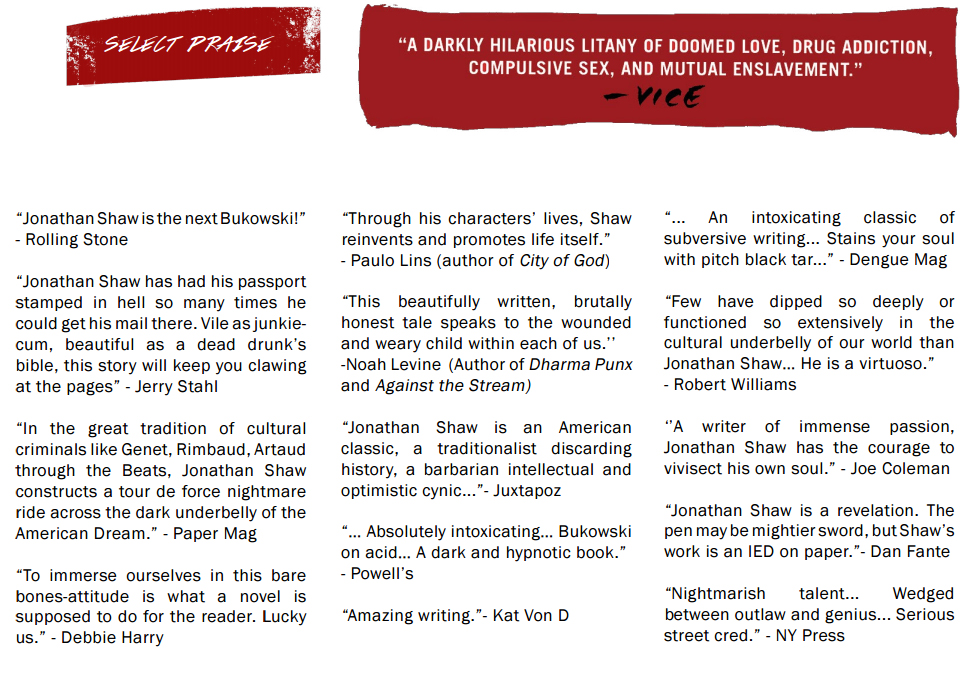 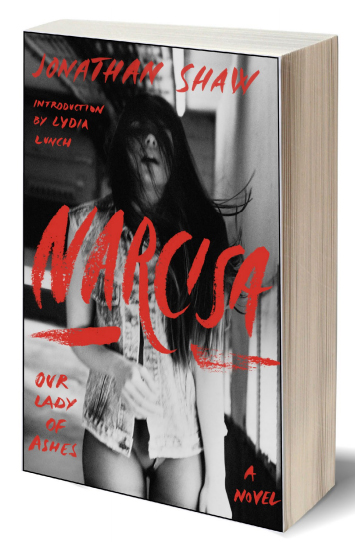 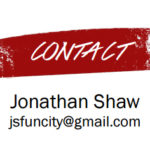 Our Lady of Ashes

VILLAGE OF THE DAMNED

One day, Narcisa disappeared again. I’d spent the previous week catering to her every bizarre whim and demand, running her back and forth to the favela at all hours of the day and night, trying to keep up with her mad, crack-fueled metaphysical ‘experiments’.

Finally, one evening, my brain twisted into a spiky tangle of sleeplessness, I threw in the towel and let her out of my sight. I simply had to get some rest, so I handed her a few bucks to go cop, then I crashed. That was the last I saw of her for days.

Then came the searing mental agony of not knowing if she was dead or alive. More sleepless nights, sitting up worrying, imagining her getting fucked in the eyes by gangs of rabid, drooling gringo sex tourists, and worse. Worried sick, I went out looking for her. I searched all the usual spots. Narcisa was nowhere.

As a last resort, I decided to take a ride over to Vila Mimosa.

Could she have sunk so low? I wondered. Could Narcisa really be so desperate and depraved now to have ended up at that infamous lowlife sex-ghetto? It was a long-shot, I knew, but in her present state, I figured anything was possible.

It had been ages since I’d been there, but I would’ve known the way blindfolded as I rode through the sleeping downtown streets, past the shadowy dockyards of Praça Mauá and the dark, deserted Praça da Bandeira. Making the familiar turn onto the old Rua Ceará, there it was, dead ahead. Vila Mimosa. The end of the line for legions of Carioca whores; the beginning of a new life of debauchery and degradation for emerging generations of bright-eyed young favela girls. An apprenticeship. A brutal, rough-and-tumble initiation into the fascinating, compelling, profitable world of dick.

Most of the garotas there hailed from the poverty-blighted wastelands of the Baixada, where life is cheap and short for all but those born under a lucky star. The poor in Rio grow such calloused souls that even sex must be fast-paced, clumsy and heavy-handed, like a barroom brawl. Like heat-crazed tropical insects that only live for a day, those girls know they won’t have much time to spread their wings and fly. They have to get their kicks and their dick while they can, how they can, wherever they can. And in Vila Mimosa, there’s always plenty of dick. All sizes, shapes, ages and colors. From the misshapen, throbbing purple bananas attached to sweaty, hard-working garbage men and construction grunts, to the sleek golden-brown members of well-toned Ipanema playboys, Vila Mimosa is a true democracy of the dick: the land of the fifteen minute, fifteen buck, short-time fuck.

I rolled along past the darkened little hole-in-the-wall bars on the outskirts, where gangs of outlaw bikers sat like laconic alligators at crooked wooden tables, plotting mayhem and glory, drinking beer in the greasy yellow shadows. Parking the bike near the entrance to the zona, I strolled on, past the late- night meat-packing warehouses, where sleeping delivery trucks lined the piss-slick cobblestones, waiting for dawn to transport their deathly red cargo to the city’s hungry mouths. And then, there it was, another parallel meat market, a slaughterhouse of cheap, easy, short-time sex. Prostitution’s Heart of Darkness.

Approaching the chaotic jumble of winking, blinking, trembling, rundown two and three-story whorehouse dwellings, the pounding cacophony of a hundred competing jukeboxes grew louder and more consuming with each step. By the time I reached the middle of the action, it was a polluted wave of hellish noise, a distorted doomsday symphony of chaos. The narrow alleys branching off like diseased arteries from the main road were where the action was. As I turned into the first little beco and made my way through that pulsating, demented sperm-derby, the giant loudspeakers assaulted my ears from every angle, like a traffic jam on the road to hell. Brushing against sweaty crowds of scrawny, shirtless favela boys, I navigated the lusty human sewer like a nervous ghost.

On either side of the reeking corridors were cramped doorways, cluttered with flabby, drunk, coked-up, naked meat-puppets; misshapen, dark-skinned women and girls, all gyrating to the ear-splitting rhythms within. Here and there, a bold, shadowy hand reached out of the dark human muddle to grope at my crotch, like a greedy monkey grabbing at a banana. Swatting the intrusive claws away like insects, I moved on through the humid, urine-reeking mist, feeling around like a sleepwalker searching for something that’s gone.

That’s when I realized I was looking for something more than Narcisa there. Something elemental. Something essential. The past. My youth. These poor, pathetic, sad-faced bitches’ youth. Whatever. I was longing for something. Anything. But there wasn’t anything anymore. Nothing. It was all gone now.

Good times gone… And here I am now, a lonely old loser, lost in a freaky, obsolete House of Mirrors… A living horror gallery of flaccid, naked, tortured flesh with the look and texture of moldy fruit rotting in the pissy tropical air, waiting for the flies, the ants, the cockroach feast to begin… Shit.

I shuddered as I passed another lineup of dilapidated aging hookers. Dull- eyed, crabby old fish-faced legions of the damned, standing around in broken doorways, teetering on sad, cheap plastic heels, dancing their tired-out, sordid gyrations into the dung-colored night. I cringed at the sudden realization that, like Narcisa, perhaps I’d finally managed to corrupt my rusty old soul to the breaking point, that there was really no turning back anymore.

This is it. The End. End of the line. And I’m still here. Broken. Damaged. Wrecked beyond repair or redemption. A pathetic old sex addict looking for a fix!

I trudged on through that deathly, dark circus of broken souls. Finally, giving up on finding Narcisa, I spotted one who looked half-alive. I made the approach, and off we went through a dim little bar and up a wobbly metal staircase.

After a lackluster ten minute fuck, I zipped up my jeans and beat it out of the dank, greasy little cubicle, looking for something to eat… Thank you come again! Wiping sweat from my face, I wandered over to an open-air food stand. An old mulatto gave me a knowing grin as he handed me a stale sandwich that smelled of rotten eggs and rotten sex. I limped over and sat down, watching the worn-out, slimy old sex parade slithering by; saggy, tragic-faced whores and confused- looking insect droves of hungry men. Wage-slaves. Worker ants out on the town, searching for a quick, cheap grunt.

All of a sudden, a booming, crabby voice, like a giant spider talking to a fleet of flies, came bashing through the shadows. Some idiot had turned up the bar TV to watch the political debates for the upcoming Presidential elections. I winced at the candidates’ faces as they spoke, spewing their incoherent political double-talk into the night. They reminded me of a bunch of lousy actors, reading bad dialogue from a boring old soap opera script.

What the fuck are these shit-breathing, sanctimonious assholes talking about?

I couldn’t for the life of me understand a word they were saying.

Death was all I could see and hear. I gawked at the woman candidate’s angry reptilian face and I shuddered in revulsion. The smug, pugnacious, short-haired old crab who would soon become Brazil’s first female president looked as dreadful as the most decrepit old whore on the sidewalk. I looked out at the stumbling legions of worn-out, drunken floozies, tottering around on their battered whorehouse heels. It was all the same shit. Shit-talking, shit-eating, lies, betrayal and death. That’s all there was to look forward to now.

Finally, I got up and crept into another whorehouse. A snaggletoothed guy with a decent selection of stolen cell phones was working his game there. I sat down in a dark corner, looking over the purloined devices, waiting for him to finish snorting his next line of coke, hoping to hurry up and pay him off so I could have a cheap phone to give Narcisa, if I ever found her again. It would be nice to stay in touch with her somehow, I mused, ignoring the concept that a cell phone, like anything else, wouldn’t last a fucking night with the Crack Monster. Finally, Snaggletooth slid up beside me at the bar, chewing on his words like some furious, hell-bound, nocturnal rodent. I handed him a ten spot and pocketed a shiny pink Motorola with a glittery plastic heart sticker on the back. Some unfortunate whore would be incommunicado now. Oh well.

Out on the street, two young hookers stumbled by in shiny new high heels and skimpy, tipsy rags of glittery nothing. Holding hands, shrieking in drunken delight, they skipped across a puddle of bum-vomit in the greasy cobblestone road, like a pair of schoolgirls playing hopscotch. In their wake, an obese mulatto whore waddled past like a hideous, crippled human garbage truck. Tired-out fuck music blared from a pair of distorted speakers beside me; an earsplitting avalanche of hellish, nonsensical monkey-spew.

I was done. I knew Narcisa would rather die than end up in this place. Time to go.
I walked off down the road, jumped on bike and headed out the way I came. Riding away from the decrepit old fuck-jungle, past the sullen clusters of undernourished killers and thugs who patrol its shadowy outskirts like gangs of toothless barracudas, I wondered where on earth Narcisa could be.

Tweet
This entry was posted on 12 May, 2016 in homepage and tagged Harper Perennial, Infinitum Nihil, Johnny Depp, Jonathan Shaw, Narcisa Our Lady of Ashes. Bookmark the permalink.